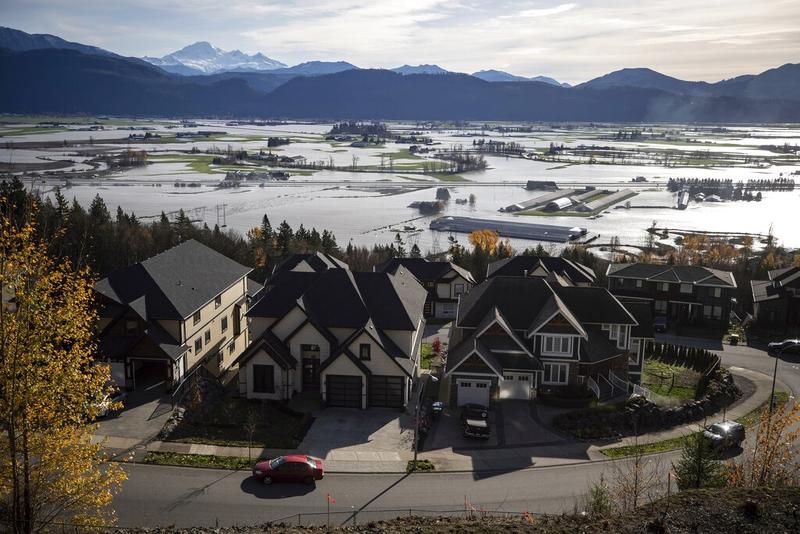 Flooded farmland is seen in the valley below houses in Abbotsford, British Columbia, Nov 17, 2021. (DARRYL DYCK / THE CANADIAN PRESS VIA AP)

WINNIPEG, Manitoba - The massive rains that unleashed floods and mudslides in the Canadian province of British Columbia exposed the country’s supply chain vulnerability as crucial railways and roads were severed from the country's biggest port.

That one storm could within hours shut down a key engine in one of the world's biggest exporting nations highlights Canada's unique economic fragility. The majority of Canadian exports, which account for nearly one-third of the country’s GDP, travel to the Pacific coast to reach Asian markets.

Building a third track through the Fraser Canyon, roughly 150 kilometers northeast of Vancouver, is not practical since the current tracks are "literally carved into the wall of the canyon," said aid Barry Prentice, professor of supply chain management at the University of Manitoba

But the supply chain route relies on two rail lines and a handful of highways through the Rocky Mountains and rugged British Columbia interior to the Port of Vancouver.

"Geology did not give Canada a lot of options and funneling a huge amount of exports down the Fraser Canyon increases our vulnerability," said Barry Prentice, professor of supply chain management at the University of Manitoba.

The Fraser Canyon, which stretches from BC's high interior plateau through the Coast Mountains to the lower mainland, suffered some of the most severe highway washouts during the storm. It was also ravaged by a wildfire this summer that destroyed a town and closed road and rail routes.

Building a third track through the canyon, roughly 150 kilometers northeast of Vancouver, is not practical since the current tracks are "literally carved into the wall of the canyon," he added.

"What this week has shown us is some of those issues around export routes, and around goods routes...are perhaps more important than many of us had even assumed," Wilkinson told Reuters.

British Columbia is not equipped to cope with the increasingly extreme weather it faces, said Simon Donner, professor of climatology at the University of British Columbia.

In this aerial photo, a Canadian Pacific locomotive and its cars that were knocked off of the train tracks by heavy rains and mudslides earlier in the week are pictured in the Fraser Canyon near Hope, British Columbia, Nov 18, 2021. (JONATHAN HAYWARD / THE CANADIAN PRESS VIA AP)

"These were rainfall totals you would expect to see in a tropical cyclone, not in November in Canada," he said.

Climate change is causing problems for shippers, but it could also offer solutions. Churchill, Manitoba's seldom-used port on Hudson Bay near the Arctic may become more viable as melting glaciers open shipping lanes

The port at Prince Rupert in northern BC plans to increase its container capacity by one-third by 2023, offering a more viable, albeit much smaller, alternative for shippers to reach Asia.

In 2017, Canada's Senate released a report on the feasibility of a 7,000-kilometer northern infrastructure corridor running from the Pacific Coast, across the boreal forest past Hudson Bay and into northern Quebec.

The report concluded such a project could boost exports but take decades to complete.

Climate change is causing problems for shippers, but it could also offer solutions.

The season for ships traveling through the Great Lakes and St Lawrence Seaway may also get longer before ice closes the route each winter, said Bob Ballantyne, senior adviser at the Freight Management Association, which represents shipping industries.

The solutions provide no near-term fix, however.

"We are in this weird place where climate change means both more drought and more flooding," said climate professor Donner. "The problem in British Columbia and across Canada and the world, is we are adapted to a climate of the past."