4 killed in clashes over French cartoons in Pakistan 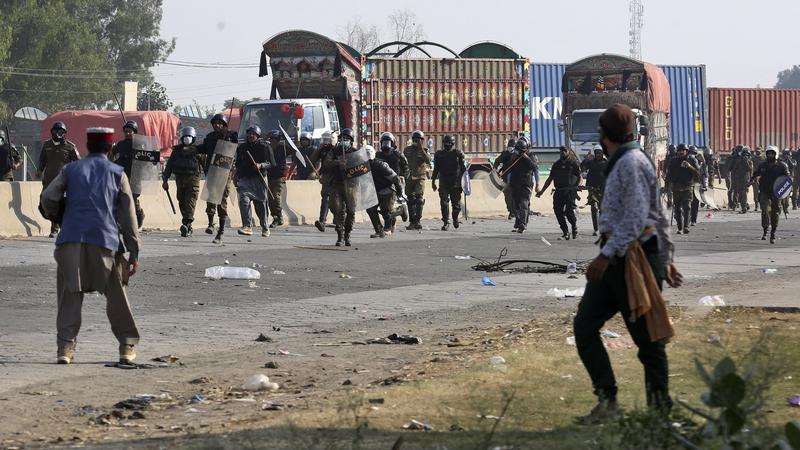 Police officers chase supporters of Tehreek-e-Labiak Pakistan, a radical Islamist party, during their protest march toward Islamabad, on a highway in the town of Sadhuke in eastern Pakistan, Oct 27, 2021. (K.M. CHAUDARY / AP PHOTO)

LAHORE - Four Pakistani police were killed and hundreds wounded when armed activists from a banned Islamist group clashed with security forces at an anti-blasphemy demonstration near the eastern city of Lahore, officials said.

The clash broke out at a rally of the banned Tehrik-e-Labaik Pakistan on a highway in Sheikhupura, just outside Lahore, as the group prepared to march on the capital Islamabad, a spokesman for the Punjab police said on Wednesday.

Thousands of TLP activists have been blocking Pakistan's busiest highway since Friday, demanding the release of their leader and the expulsion of France's ambassador over the publication of a series of caricatures depicting the Prophet Mohammad by a French satirical magazine

Rao Sardar Ali Khan, inspector general of the Punjab police, said four officers were killed and at least 263 wounded. TLP spokespeople said several of the group's activists had also been killed or wounded in the clash.

Thousands of TLP activists have been blocking Pakistan's busiest highway since Friday, demanding the release of their leader and the expulsion of France's ambassador over the publication of a series of caricatures depicting the Prophet Mohammad by a French satirical magazine.

After days of tension, including a clash last week in which three police officers were killed, the Interior Ministry ordered paramilitary Rangers to be deployed under anti-terrorism laws.

"They will be there for 60 days. I have given them authority that they could go to anywhere they want in Punjab," Interior Minister Sheikh Rasheed Ahmad told reporters. "I'm still warning the TLP to please back off."

It is the group's third countrywide protest campaign since 2017 over caricatures which are considered deeply insulting by Muslims.

The French magazine Charlie Hebdo first published the cartoons in 2006 and republished them last year to mark the opening of a trial over a deadly attack on its offices in Paris by Islamist militants in 2015.

Pakistani Information Minister Fawad Chaudhry said the government would use force to block the Islamists from entering the capital Islamabad.

"We have shown restraint so far but the challenge to the state's authority can't be tolerated any more," he told reporters.

Districts along the Grand Trunk Road were brought to a standstill where the city administration had already placed shipping containers to block entry and exit routes.