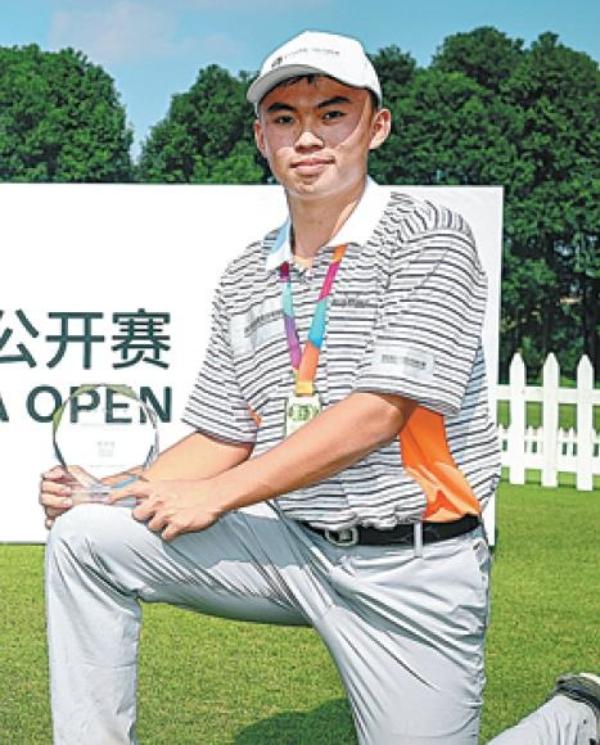 Sixteen-year-old Chinese golfer Wu Dianchao confirmed his place in the 2021 and 2022 Volvo China Open following a solid 5&4 victory over local boy Zhou Yanhan in the final of the Volvo China Junior Match Play Championship in Chongqing on Sunday.

A runner-up three years ago, Wu was making his third appearance in the tournament. It was certainly a case of third time lucky for the Guangdong teenager, the fifth seed in the 32-player event staged at Sun Kingdom Sports Club.

"It's the first time I've played against Zhou who is a tough opponent and a great putter," said a delighted Wu. "I'm so pleased to have qualified for the Volvo China Open－I've waited such a long time for this.

Throughout the tournament I followed my caddie's advice, read the greens carefully, and controlled the strength and speed of the putts. I also listened to my coach's advice and managed to remain calm as much as possible.

"Throughout the tournament I followed my caddie's advice, read the greens carefully, and controlled the strength and speed of the putts. I also listened to my coach's advice and managed to remain calm as much as possible."

Earlier in the week, 13-year-old runner-up Zhou won the Volvo China Junior Challenge, and he admitted six rounds of golf in five days had taken their toll. "I felt a lot of pressure today and I think that affected my performance," he said.

"Wu played aggressive golf and I could see the gaps in our technique and overall game. But I'll go away and practice much harder in the future."

In the girls' competition, victory went to Ni Zixin from Wuhan. The 14-year-old, who was making her debut in the tournament, defeated fourth seed Ji Yuai by two holes.

"Ji Yuai is a much more experienced player and I've always admired her," said Ni, the No 2 seed. "She has perfect technique, especially in her iron play. To be honest, I never thought I could win the championship but my driving and putting were key to me doing well and I'm delighted with that."

Now in its 27th consecutive year, the Volvo China Open is the season finale of the 2021 China Tour and the longest-running professional golf tournament on the Chinese mainland. It will take place from Dec 16-19 at Shenzhen Genzon Golf Club with a prize fund of 2 million yuan ($313,000).

After the tournament, the winner of the China Tour money list will be crowned and will be rewarded with a playing card and full playing rights for the 2021-2022 European Tour.