Hungary's Orban accuses EU, US of meddling as 2022 election race heats up 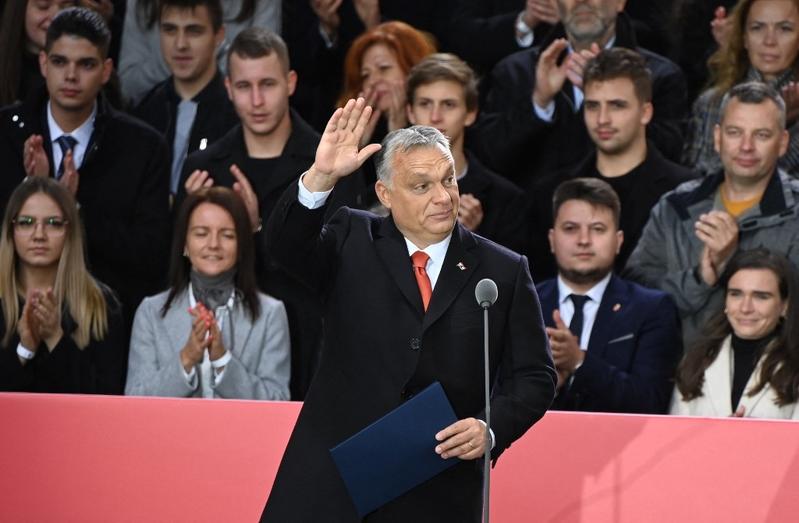 Hungarian Prime Minister Viktor Orban waves after delivering a speech during an event in Budapest on Oct 23, 2021. (ATTILA KISBENEDEK / AFP)

BUDAPEST - Prime Minister Viktor Orban, who faces a close election race next year, accused Brussels and Washington of trying to meddle in Hungarian politics and called on his supporters to defend the achievements of his nationalist government's decade in power.

For the first time since he came to power in 2010, Orban will face a united front of opposition parties including the Socialists, liberals and the formerly far-right, now centre-right, Jobbik in 2022 parliamentary elections.

For the first time since he came to power in 2010, Viktor Orban will face a united front of opposition parties including the Socialists, liberals and the formerly far-right, now centre-right, Jobbik in 2022 parliamentary elections

The six-party alliance is led by Peter Marki-Zay, a 49-year-old Catholic conservative, father of seven and small-town mayor who seems to embody the traditional values Orban publicly champions and is seen as a tough challenger.

Orban told tens of thousands of supporters in central Budapest that Washington and billionaire George Soros were trying to get their people, the Hungarian leftist opposition, elected using their money, media and networks.

"But what matters is not what they in Brussels, in Washington and in the media which is directed from abroad, want. It will be Hungarians deciding about their own fate," Orban said on Saturday.

"Our strength is in our unity ... we believe in the same values: family, nation, and a strong and independent Hungary."

At a separate opposition rally Marki-Zay said that if elected, his government would draft a new constitution, clamp down on corruption, introduce the euro and guarantee freedom of the media.

"This regime has become morally untenable ... the momentum we have now should take us to April 2022," he said.

Opinion polls show Orban's Fidesz party and the opposition alliance running neck-and-neck, with about a quarter of voters undecided.

Saturday's anniversary of the 1956 uprising against Soviet rule has offered Orban a symbolic platform for his agenda as his Fidesz party scales up its pre-election campaign.

He has showered the electorate with handouts, including a $2 billion income-tax rebate for families, and stepped up his strong anti-immigration rhetoric.

Orban's government, with its main ally Poland, has clashed with Brussels over media freedoms, rule of law issues and LGBT rights - while stating that Hungary's interest is to remain a member of a strong European Union.

"Brussels speaks to us and treats us, along with the Poles, as if we were an enemy ... well, it is time for them in Brussels to understand that even the communists could not defeat us," Orban told cheering supporters, who were waving the national flag and held banners with slogans such as "Brussels equals dictatorship."