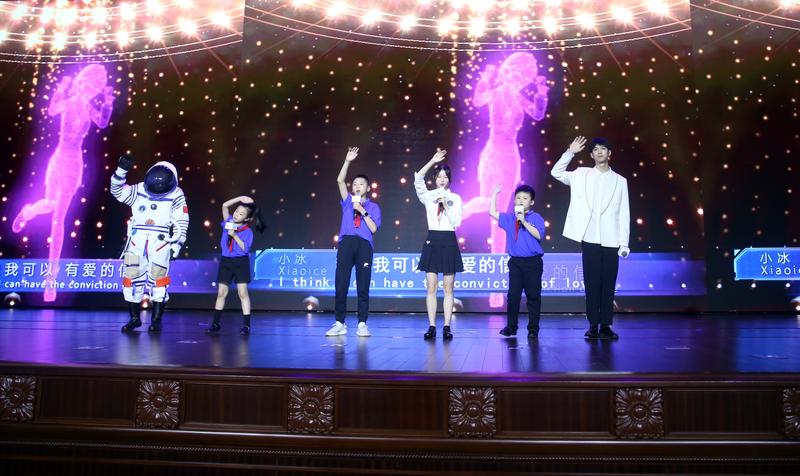 A "female" virtual singer (in background) developed by AI platform Xiaoice interacts with humans at the 2021 World Artificial Intelligence Conference in Shanghai on July 8. (CHEN YUYU / FOR CHINA DAILY)

In such a shift, AI is moving beyond mechanical, repetitive work into artistic creation, which requires original ideas and has long been viewed as unique to humans.

From producing paintings to writing poetry to composing songs, AI platforms or algorithms developed by tech companies and universities are showcasing their capabilities. But they are also triggering questions about what should be considered original work in the AI era, experts said.

Xiaoice, a Chinese AI pioneer, was spun off from the United States technology giant Microsoft and became a separate company based in Beijing more than a year ago. It recently announced that its AI platform, also called Xiaoice, can now produce traditional Chinese paintings that are not simply copies of human works.

Hu Xiaoguang, product director of Xiaoice, said that ability marked a breakthrough for Xia Yubing, an AI bot developed on the basis of the company's platform.

Xia started to learn how to produce Western oil paintings several years ago. In 2019, an art exhibition was held in Beijing to demonstrate "her" capabilities, which included work in the styles of renowned 17th century Dutch artist Rembrandt and the classic realism of Japan's Ukiyo-e genre.

But producing original traditional Chinese paintings has been considered a step beyond that, and Xia's progress in that field is seen as a breakthrough, Hu said.

According to the company, Xia's paintings have been created when she has been "inspired" by texts－you type it, Xia draws it. They are completely independent and original new works, and not based on what humans have already painted.

"Some people have said that AI can create an unlimited number of paintings, so we could just let AI produce 10,000 pictures and pick one that is good enough. But that is not what we are doing," Hu said.

"We pay more attention to whether AI is able to create high-quality works in large quantities with consistent quality and standards. After extensive research and development, we have achieved that," Hu said. "From now on, the AI bot will focus on perfecting its skills in traditional Chinese paintings."

This is not the first creative venture for the company's AI bots. Beginning as a chat robot or chatbot in 2014, Xiaoice published poetry and composed and released dozens of songs. It is also embedded in smartphones, smart speakers and other electronics produced by many companies－including Huawei Technologies Co, Xiaomi Corp, Oppo and Vivo－serving as voice-activated AI assistants to converse with consumers.

All these endeavors have helped Xiaoice to accumulate 160 million monthly active users. The company is also continuing to experiment with how AI could use emotional intelligence, which is the ability to use emotions effectively, to serve as a companion for people and how AI could be used to imbue machines with creativity.

Researchers and companies in other countries also are experimenting with AI. In 2017, US singer Taryn Southern unveiled Breaking Free, a song composed and produced by an AI system developed by US startup Amper Music.

In 2018, the AI-generated Portrait of Edmond Belamy became the first of its kind to be auctioned at Christie's. The artwork, created by computer algorithms developed by French AI company Obvious, was sold for $432,500.

Just like the paintings by the bot Xia, such AI-generated work is based on machine-learning models of artificial neural networks that resemble the human brain and nervous system. They can study materials input into the systems and produce creative output.

When it comes to AI painting, a neural network called a generative adversarial network plays a key role. GAN creates the image pixel by pixel. Like most artists or designers, it produces both broad strokes and fine details in layers.

But as pioneering AI-generated works appear in greater numbers, tech companies and art critics are also addressing the fundamental question of whether such images, poems and songs produced by the networks can actually be called art.

Qiu Zhijie, an artist and professor at China's Central Academy of Fine Arts, said the answer depends on how originality in art is defined when machines are involved in its creation.

"When nobody can tell the difference between paintings generated by AI and those of humans, then we can regard AI's work as original,"Qiu said.

Xia appears to have already passed the test. In 2019, works of art produced by Xia were submitted for an exhibition of postgraduates' work at China's Central Academy of Fine Arts. When Xia's paintings were presented beside those of humans, nobody realized they were generated by AI.

Based on its artistic capabilities, Xiaoice is also exploring how AI could revolutionize the design industry. Xiaoice is now creating fabric designs for international fashion and garment producers, using new AI capabilities to create patterns based on words, themes and colors. These latest works have been produced in partnership with the China Textile Information Center and the China Textiles Development Center.

"It is exciting to know that AI can develop immaculate designs for the production of fabrics or ready-to-wear collections," said CTDC President Li Binhong in an earlier interview.

"In an industry where trends can rapidly evolve on a day-to-day basis, AI will help us to stay ahead of the competition and deliver highly creative collections in record time. It definitely can handle the rapid turnaround required in the fashion industry," Li said.

In 2019, Xiaoice created the Avatar Framework, which enables the Xiaoice platform to perform multiple functions like chatting, singing songs and drawing pictures, and made it available to other companies. The technology allows the companies to have multiple AI capabilities in their products, such as building their own voice-activated AI assistant to control home appliances and using AI to design clothing patterns, the company said.

"AI is one of several technologies that will have an impact on the art market," said Hu Changqiong, a painter at the Chinese Academy of Oil Painting. "There is no need to rush to define what AI paintings are or to reject such artwork."