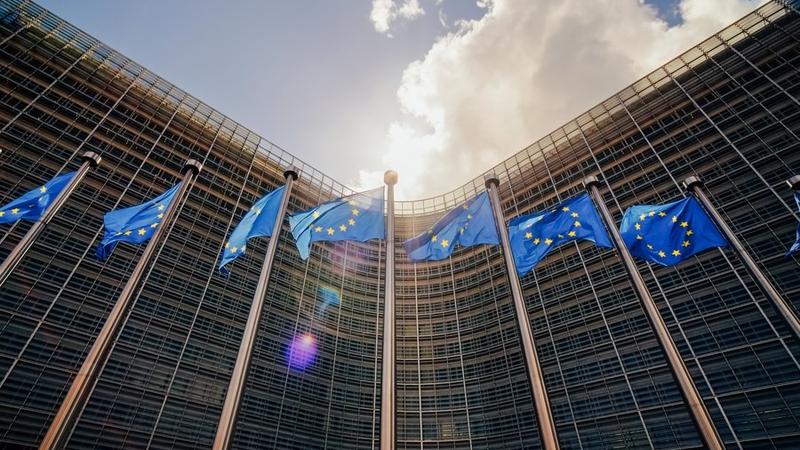 European Union flags fly in front of the headquarters of the European Commission in Brussels, Belgium, June 29, 2020. (PHOTO / XINHUA)

The European Union as soon as this week may trigger a new tool that allows it to withhold budget payments to member states that fail to adhere to the bloc’s democratic standards.

The so-called conditionality mechanism came into force this year and hasn’t yet been used by the European Commission, the bloc’s executive arm. If utilized, the mechanism could freeze billions of euros in budgetary payments bound for member states.

“It’s a question of days or weeks, maximum,” EU Justice Commissioner Didier Reynders said in an interview with Bloomberg Television when asked when the bloc would use the tool. More broadly when it comes to Poland, he added, “For the moment we’re trying to build the most robust file possible to react."

The EU has been hinting for a while it may soon trigger the conditionality mechanism, which withholds payments from the budget – as well as its 750 billion-euro (US$870 billion) pandemic recovery package – to member states accused of democratic backsliding.

Poland and Hungary are challenging the conditionality mechanism in the EU’s top court.

Polish government spokesman Piotr Muller repeated in an interview with the newspaper Dziennik Gazeta Prawna on Monday that the rule-of-law mechanism goes beyond EU treaties and warned of a serious crisis in the bloc if the tool is deployed.

“We have more allies in the EU who understand that in the future the commission could use that tool against others,” he said. “The political map of Europe could change in the coming months because of elections in different countries.”

But that mechanism is just one tool in the EU’s toolbox and the commission has already withheld approval of Poland’s and Hungary’s recovery plans, which is needed to unlock stimulus funds from the pandemic package.

It’s very important and a priority to call on the commission to not approve the Polish recovery plan.

If the two countries were to miss out on the stimulus funds – either by the commission not approving their plans or because of the conditionality mechanism – Poland would forfeit 36 billion euros in recovery money and Hungary 7.2 billion euros.

Reynders is traveling to the different EU countries to discuss the commission’s rule-of-law strategy.

Polish Prime Minister Mateusz Morawiecki, who triggered the ruling by the Polish court, will speak to EU lawmakers in the European Parliament about the latest developments on Tuesday, together with Commission President Ursula von der Leyen. Reynders said the commission will be paying close attention to Morawiecki’s remarks.

“The president of the commission will be in the parliament with the prime minister of Poland to explain again that the pressure will come not only from the commission, from the parliament, from the Court of Justice, but more and more from the different member states and also from the civil society and the population in Poland,” Reynders said.

EU leaders will meet in Brussels Oct 21-22 and while rule of law isn’t on the official agenda, some premiers have already indicated their intention to bring up the topic. The Netherlands’s caretaker prime minister, Mark Rutte, told his parliament last week that he’ll ask the commission to withhold the stimulus money earmarked for Poland.

“It’s very important and a priority to call on the commission to not approve the Polish recovery plan,” Rutte told Dutch lawmakers.

Poland’s nationalist government last week cemented into law a ruling that challenges the EU legal order by saying Polish law can override it. The primacy of EU law is written into its treaty.

Asked if Poland’s latest actions regarding its judiciary would hold up the commission’s approval of Warsaw’s recovery plan, Reynders said: “that will depend on the reaction of Poland.”