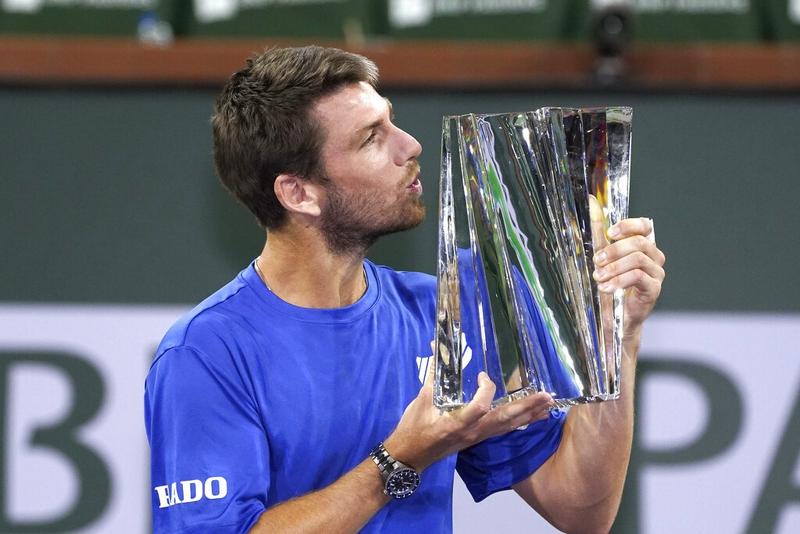 Cameron Norrie, of Britain, puts his lips to his trophy after defeating Nikoloz Basilashvili, of Georgia, in the singles final at the BNP Paribas Open tennis tournament on Oct 17, 2021, in Indian Wells, Calif. (MARK J. TERRILL / AP)

Cameron Norrie battled back to defeat Nikoloz Basilashvili 3-6 6-4 6-1 in the Indian Wells final on Sunday, becoming the first British man to win the Masters 1000 tournament.

It appeared an upset was in the works when the hard-hitting Basilashvili quickly took the first set but Norrie regrouped in the second, breaking the Georgian at love to force a decider.

In the third set, the left-handed Norrie broke early and saved three break points to take a 3-0 lead as unforced errors began to pile up for Basilashvili under the lights in the Southern California desert.

Norrie sealed the biggest win of his career when Basilashvili sent a forehand long on championship point.

"What can I say? Obviously, I'm so happy. It's my biggest title so I can't really describe it right now," said Norrie, who was playing in his sixth final of his breakout year.

Cameron Norrie has shown steady improvement all year and expertly executed his strategy of forcing Nikoloz Basilashvili into long rallies in the final, giving himself the opportunity to dictate points from the baseline

Britain's Andy Murray, Tim Henman and Greg Rusedski have all played in the men's finals at Indian Wells but finished runner-up.

Norrie has shown steady improvement all year and expertly executed his strategy of forcing Basilashvili into long rallies in the final, giving himself the opportunity to dictate points from the baseline.

He congratulated Basilashvili on his outstanding tournament, where the 29-year-old stunned world number three Stefanos Tsitsipas in the quarter-finals and American Taylor Fritz in the semis. 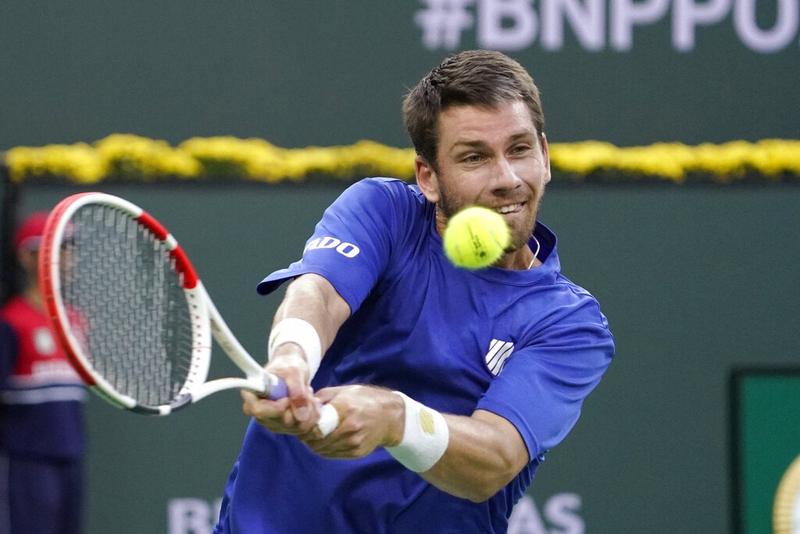 "I'm sorry it went my way. You deserved it just as much as I did," Norrie said.

"Well done to you and your team on a great week."

Basilashvili said he was disappointed in the outcome but looked forward to returning to the event, which is sometimes referred to as the fifth major.

The tournament was not held last year due to the COVID-19 pandemic and was pushed from March to October this year because of the global health crisis.

It will return to its regular March date on the sports calendar next year.

"I was hoping to get a title, but it's okay," Basilashvili said.

"I will move on and I hope that I'll come back here in March and play better tennis."

Norrie's breakthrough win comes on the heels of British teenager Emma Raducanu's stunning triumph at the US Open last month.

Earlier in the day, the tournament crowned its first female champion from Spain when Paula Badosa came out on the winning side of a three-set thriller against Victoria Azarenka to claim the biggest title of her career.