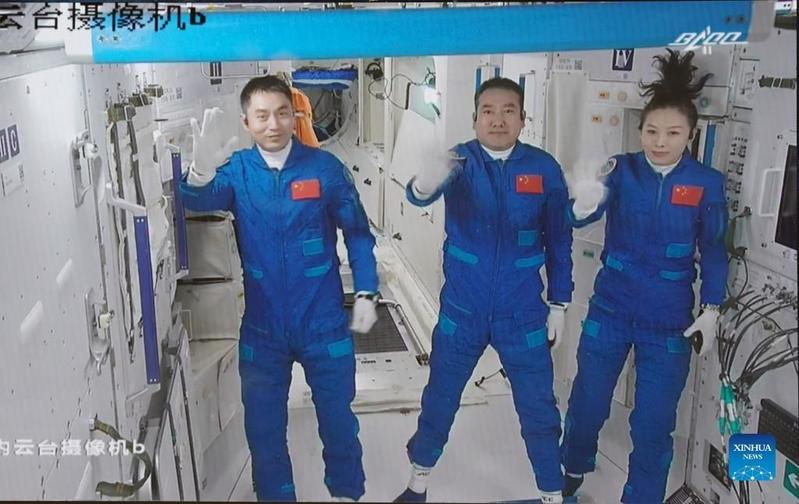 China's Shenzhou XIII mission crew entered the Tiangong space station on Saturday morning, embarking on their six-month journey inside the station in the country's longest spaceflight.

The three-member crew — mission commander Major General Zhai Zhigang, Senior Colonel Wang Yaping and Senior Colonel Ye Guangfu — floated into the station's core module, named Tianhe, or Harmony of Heavens, at 9:58 am, around three hours after the automated docking of their spacecraft with the space station complex. 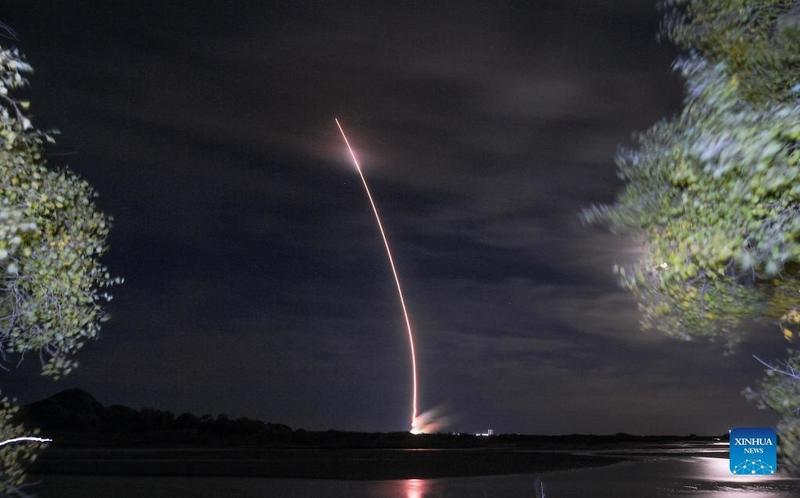 Their Shenzhou XIII spacecraft was lifted by a Long March 2F carrier rocket that blasted off at 12:23 am at the Jiuquan Satellite Launch Center in northwestern China's Gobi Desert.

The Shenzhou XIII spacecraft was lifted by a Long March 2F carrier rocket that blasted off at 12:23 am Saturday at the Jiuquan Satellite Launch Center in northwestern China's Gobi Desert

About 582 seconds after the launch, Shenzhou XIII separated from the rocket and entered its designated orbit. The crew members are in good shape and the launch is a complete success, the China Manned Space Agency declared. 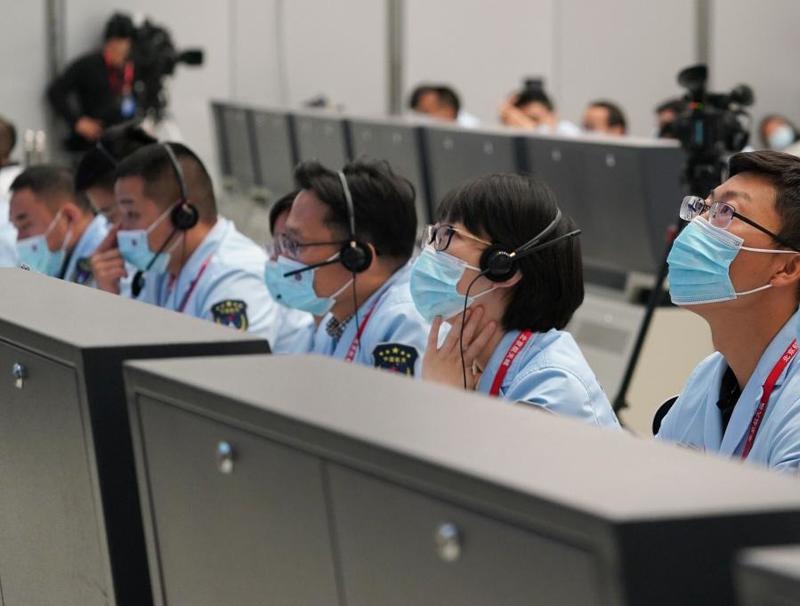 At 6:56 am, the spaceship completed the orbital status setting after entering the orbit and conducted a fast automated rendezvous and docking with the radial port of the Tianhe core module, forming a complex together with the cargo crafts Tianzhou-2 and Tianzhou-3.

After a series of preparations, Zhai opened the hatch of Tianhe. At 9:58 am, the three astronauts entered the core module one by one.

Shenzhou XIII is the fourth spacecraft to visit the Tiangong station and the second crewed ship to transport astronauts to the orbiting outpost.

The mission is expected to become the longest crewed spaceflight by China, doubling the time spent in the Shenzhou XII mission. It will also see the first spacewalk by a Chinese woman.

Mother of a 5-year-old girl, Wang is China's second female astronaut to take part in a spaceflight. She took part in the Shenzhou X mission in June 2013.

The Shenzhou XIII crew is tasked with a wide range of assignments, such as performing two to three spacewalks to install a small robotic arm onto a larger one and verifying key procedures and technologies like manual control of the robotic arms and robotic arm-assisted movement of station modules, an official with the China Manned Space Agency said.

The astronauts will also check the performance and capability of devices inside the station, and test support instruments for astronauts' life and work in long-term flights, Lin Xiqiang, deputy director of the CMSA, said at a news conference on Thursday at the Jiuquan center. 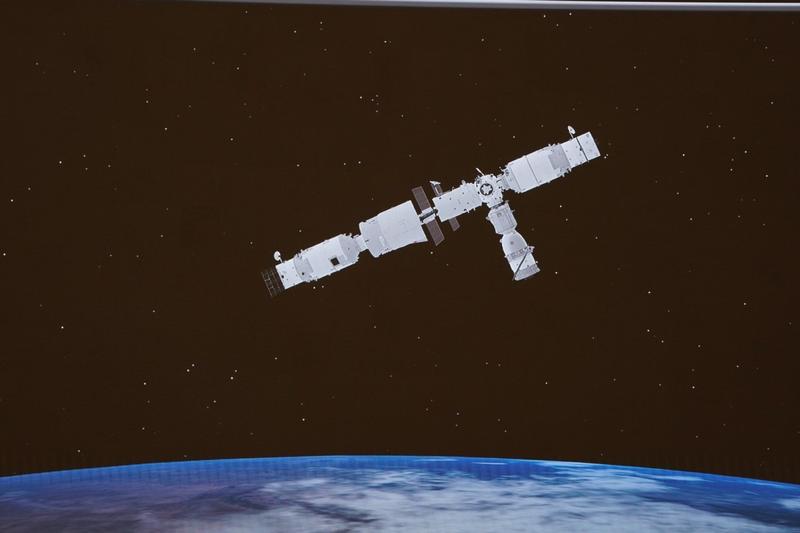 China's Shenzhou XIII crewed spacecraft docks with the Tiangong space station in the morning of Oct 16, 2021, with astronauts ready to enter the station to start a six-month journey. (XINHUA)

The astronauts will conduct scientific experiments and technology demonstrations in space medicine, microgravity physics and other fields. They will also deliver educational lectures that will be televised for Chinese students to watch, the official said.

It will be physically and psychologically challenging to work and live in a zero-gravity environment for six months, Lin said, adding that the astronauts will have in-orbit exercises and mental health support to help them stay at their best.

The ground team will optimize their menu and provide psychological support based on the monthly assessment of the astronauts' status, said Lin.

The mission has also prepared for emergency life saving under extreme conditions. If there is a serious failure that threatens the safety of the astronauts, they may evacuate through the spaceship docked with the station and return to Earth

About 4,800 pre-defined plans have been formulated to cope with possible faults, with verification and drills accordingly.

The mission has also prepared for emergency life saving under extreme conditions. If there is a serious failure that threatens the safety of the astronauts, they may evacuate through the spaceship docked with the station and return to Earth.

And if the malfunction blocks the spaceship from returning, the rescue spacecraft will be launched immediately to dock with the space station and bring astronauts back in a timely manner.

China's cargo spacecraft Tianzhou-3, carrying supplies for the Shenzhou XIII crewed mission, was launched and docked at the rear docking port of Tianhe on Sept 20. 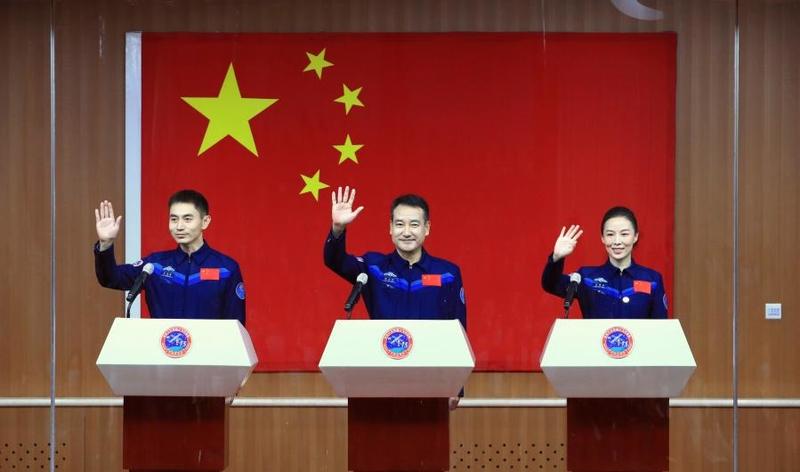 The cargo can ensure sufficient food and drinking water for three astronauts to remain in orbit for six months.

On Sept 18, the Tianzhou-2 cargo craft separated from the rear docking port of Tianhe and docked with its front docking port.

One of China's most challenging and sophisticated space endeavors, Tiangong will eventually consist of three main components — the Tianhe core module attached to two large space labs — with a combined weight of nearly 70 metric tons. The entire station is set to operate for about 15 years in a low-Earth orbit about 400 kilometers above the planet.