Close on the heels of the UN’s climate report detailing the disastrous human influence on the atmosphere, Para Site hosts an exhibition highlighting the areas of concern while also seeking to inspire acceptance and empathy. Chitralekha Basu reports. 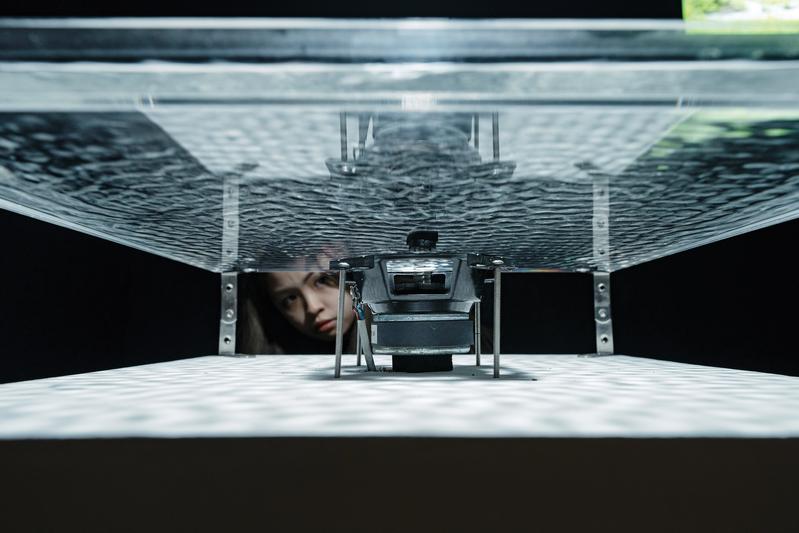 One of the striking, and charmingly meaningful, features of the Liquid Ground show is in the way the outside is allowed into the exhibition space. The sky, green hills and cluster of highrises on the other side of a three-track slider window are reflected on the circular base of Alice Wang’s untitled work — seeping in between serially diminishing (and/or enlarging, depending on the viewer’s perspective) rows of porcelain arcs with gold overglaze. The mirrored surface of the piece makes complete circles of the golden arcs and the highrises outside the window, seen together with their reflections, begin to resemble the movement of digital sound waves.

Liquid Ground’s curators, Alvin Li and Feng Junyuan, made clever use of host gallery Para Site’s 22nd-floor art space in Quarry Bay by underscoring the presence of nature in a show that addresses concerns about its precarious state. Among the other pieces that appear to be in dialogue with the world that lies beyond the walls of the gallery is a selection of  Zheng Bo’s pencil sketches of flowers and plants from Lantau Island. Here, a piece of the sky enters through a smaller window and is captured on the glass covering the sketches. The dimensions and shape of the window reflected on the glass seem to mime those of the sheets of paper Zheng has used to sketch on although this is an optical illusion.

“The fact that Para Site is located in an industrial high-rise already speaks a lot about the reality of art infrastructure in a city like Hong Kong,” said the curators in an e-mail interview (unable to travel to Hong Kong from their bases in London and Shanghai on account of pandemic-related travel restrictions). “The view outside of the windows definitely adds a layer of meaning to the artworks: Art is not happening in an abstract white cube space; the making and circulation of art is always intertwined with the material and economic condition of the urban environment.” 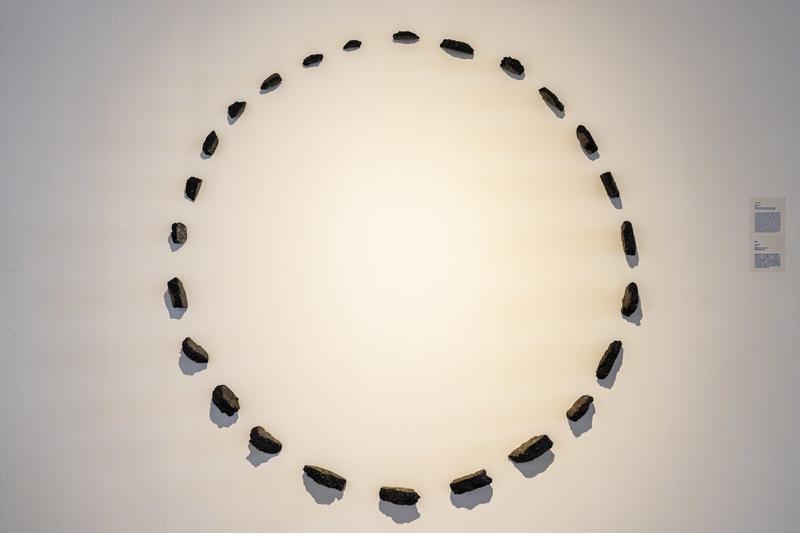 Leelee Chan uses recycled asphalt to create a sculpture that gains an extra dimension when exposed to sunlight. (PHOTO PROVIDED TO CHINA DAILY)

Liquid Ground is the latest in a series of shows put together by emerging curators in response to Para Site’s international open call inviting exhibition proposals. Supported by the Hong Kong Arts Development Council, the project takes a long hard look at the idea of land reclamation for development, and more specifically at the Hong Kong governments’ controversial Lantau Tomorrow Vision project launched in 2018.

“We were very determined from the outset that the exhibition should engage with the lived realities of Hong Kong while reflecting our long-term and ongoing research around eco-criticism and geo-engineering,” the curators said. “Therefore, we decided to use the Lantau Tomorrow Vision project in the exhibition as a sort of curatorial jumping-off point to think through a range of interrelated, transversal themes, such as developmentalist statecraft, the abuse of earth materials in urban planning, and the anthropocentrism behind such vision and drive to terraform at the expense of multi-species diversity.” 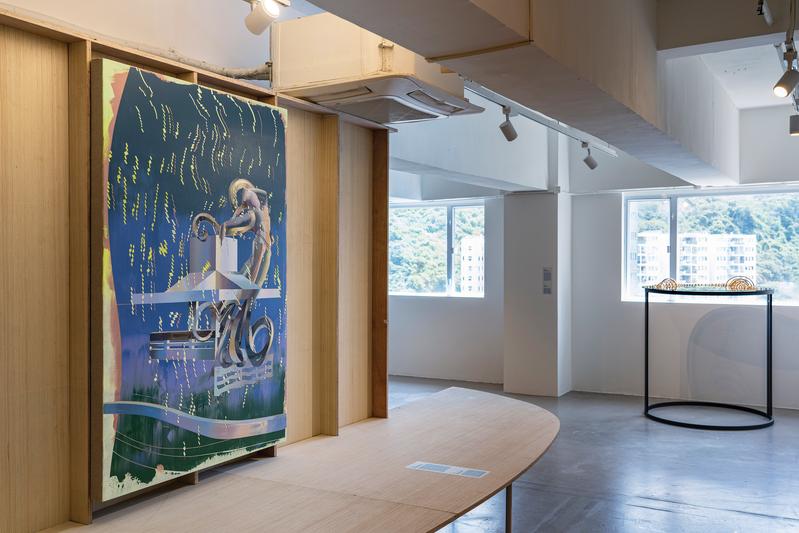 The view through Para Site’s windows can make artworks like Cui Jie’s painting (left) and installation by Alice Wang (right) appear in a new light. (PHOTO PROVIDED TO CHINA DAILY)

A number of artworks featured in Liquid Ground directly address the anxieties regarding the possibility of an industrial-scale land reclamation program irreversibly damaging the biodiversity of Lantau Island. For instance, Zheng Bo’s assorted pencil sketches of subtropical plant life — including that of the endemic Lantau Star Anise — feels like a meditative ode on the island’s multi-species environment. On the other hand, Zheng Mahler’s installation subverts the notion of the Anthropocene by inviting the audience to visually experience the ultrasonic frequencies only a buffalo can hear. The piece, comprising a sound sculpture, binaural microphone shaped like buffalo ears, video and book, apotheosizes Lantau’s generic water buffaloes — a species that roams wild among the island’s dense vegetation and have helped shape its biodiverse wetland ecology — in art.

“In this work, there’s an attempt to translate and let the audience experience some aspects of the sensory world of the water buffalo which is so different to ours and thus acknowledge the limitations of human sensory perceptions, particularly our reliance on sight,” said Zheng Mahler, an art collective comprising artist Royce Ng and anthropologist Daisy Bisenieks. “We found that water buffalo hearing has a range of 14 hertz to 40,000 Hz, compared to humans, which only have a 20 Hz — to 20,000 Hz frequency range. It was only when we discovered the field of ‘cymatics’, or the visualization of sound, that we realized that the unheard sound frequencies which water buffalo perceive could be ‘visualized’ in water.”

Watching the ripples of water, gently criss-crossing each other on a Chladni plate under a spotlight inside a dark room, as a video showing the lush green natural habitat of the Lantau buffaloes plays in the background could have a calming effect on jaded nerves, but the piece’s elegiac tone is unmistakable. 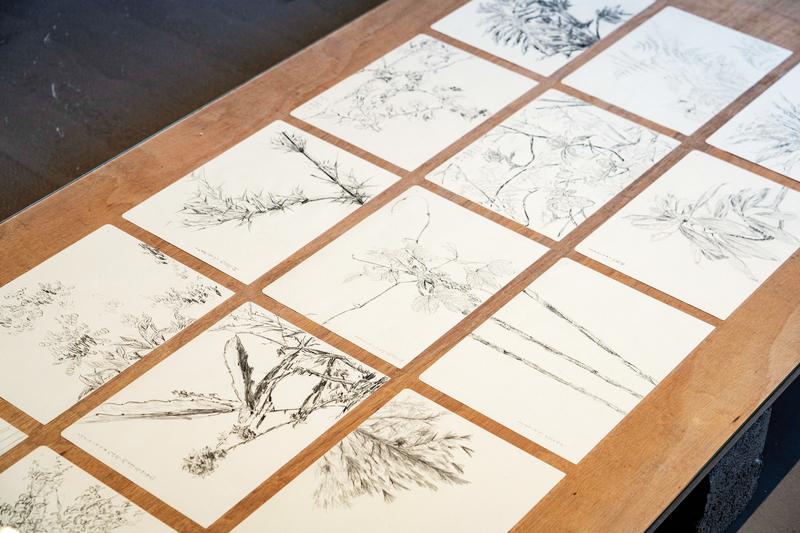 Zheng Bo’s meditative pencil sketches are of plants that are rare and endemic to Lantau Island. (PHOTO PROVIDED TO CHINA DAILY)

“While an art exhibition may not change the outcome of a large-scale infrastructure project in the same immediate sense a protest or an alternative urban planning program might, it can be productive, epistemologically speaking, by encouraging audiences to imagine more equitable and sustainable ways of future cohabitation, and collectively wield such blueprints and schemata into reality,” the curators said.

Leelee Chan’s art practice, for instance, is premised on recycling — an idea most people can appreciate. Chan makes art out of scrap. In this exhibition, she has arranged pieces of broken asphalt — waste from rebuilding and repairing of roads — in the shape of a circle on a wall in a way that goes beyond critiquing the environmental impact of urban renewal. Her piece, called Absorber #2, stands out for its uncomplicated appeal and also the cosmic effect it manages to create by allowing sunlight to touch and illuminate its different facets during different times of the day. 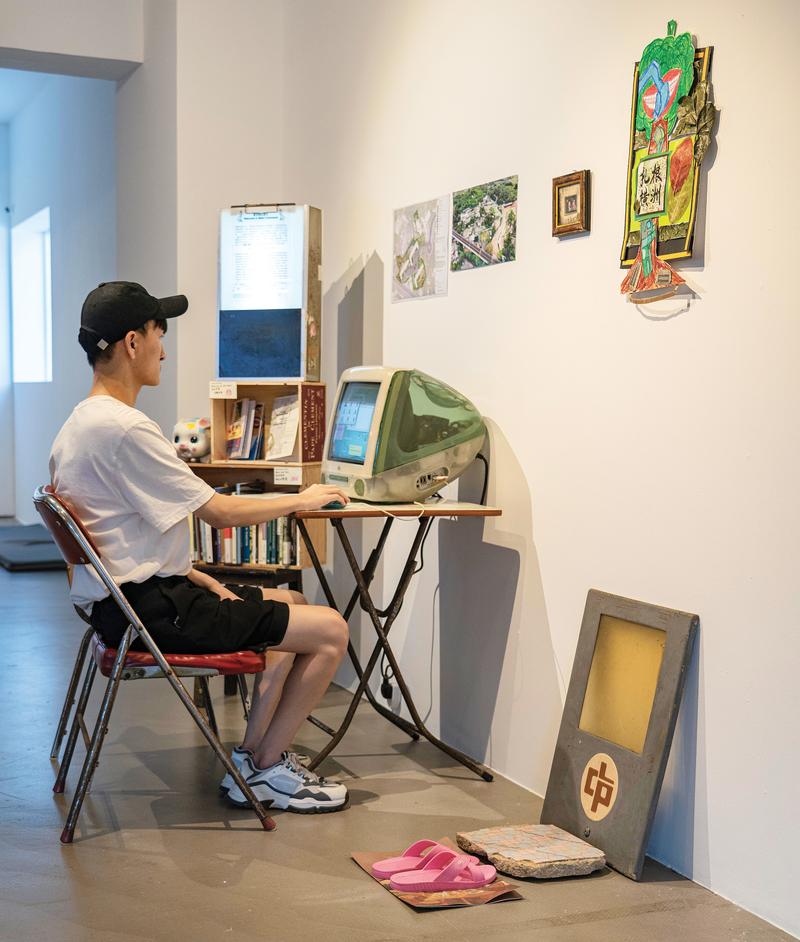 An interactive installation by the Centre for Land Affairs allows visitors to access research data as well as art contributed by villagers displaced to make way for development in the New Territories. (PHOTO PROVIDED TO CHINA DAILY)

Cui Jie reimagines a real-life case where eco-friendly architecture fell prey to indiscriminate construction by visualizing the contentious piece in a realm of fantasy. The Lakeside Pavilion in Junction Road Park, Kowloon, designed by the architect Chung Wah-nan (1932-2018), used to stand in the middle of an artificial lake as a homage to traditional Chinese garden design and had a partially open roof to allow rainwater to pour in. Then the roof was cemented over and the lake filled with earth to make room for more construction. In Cui’s painting, Rainfall in Pavilion, the structure is suspended in a purplish blue and green rain-washed, rejuvenated space. The limbs and posture affected by the female figure that seems to emerge from the pavilion echo the curvilinear lines of the structure, while the pixel shape of the drops of neon light streaming down the surface hints that the picture might belong in a digitalized future.

There are more attempts at reinterpreting the given or making new stories out of existing mythology. In Future Host’s two-channel video, Worlding Hands, for example, the Chinese creation myth is enacted by a performer who responds to  the five elements of Chinese cosmology, symbolically represented by glazed and fired ceramic toys, water, clay, newly hatched reptiles and the human body. The video is presented together with Heidi Lau’s rather forbidding-looking ceramic sculptures, which seem to have sprung out of the film. The heavy juggernaut of a piece with a craggy surface has been treated to resemble a monstrous lichen-covered relic dredged from under the sea, bearing the imprint of centuries while the jumble of chains ending, somewhat sinisterly, in tiny hand shapes, seem to point to the histories of slavery and colonization.

Liquid Ground underscores the alarming projections published by the UN climate report in August. Its curators are hoping that “the exhibition can somehow facilitate this long-overdue acceptance of our grim climate reality.” 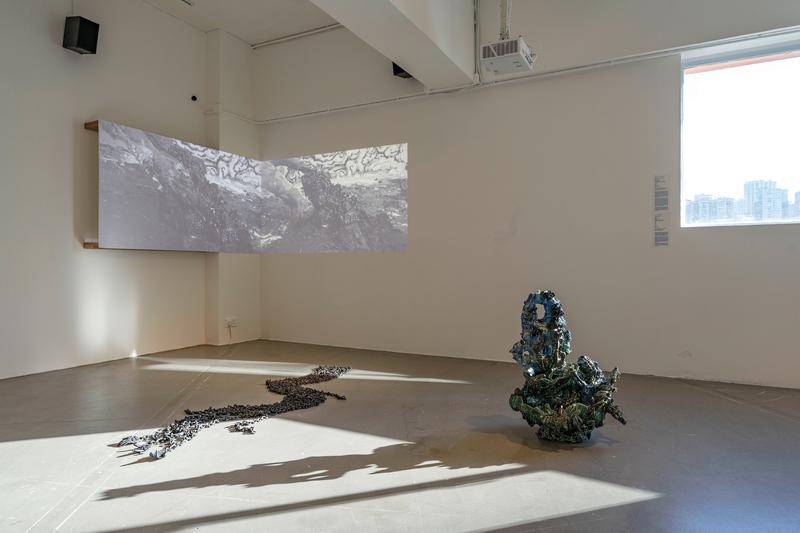 A Future Host-created two-channel video that reimagines the Chinese creation myth is in dialogue with ceramic sculptures by Heidi Lau in the Liquid Ground exhibition hosted by Para Site. (PHOTO PROVIDED TO CHINA DAILY)