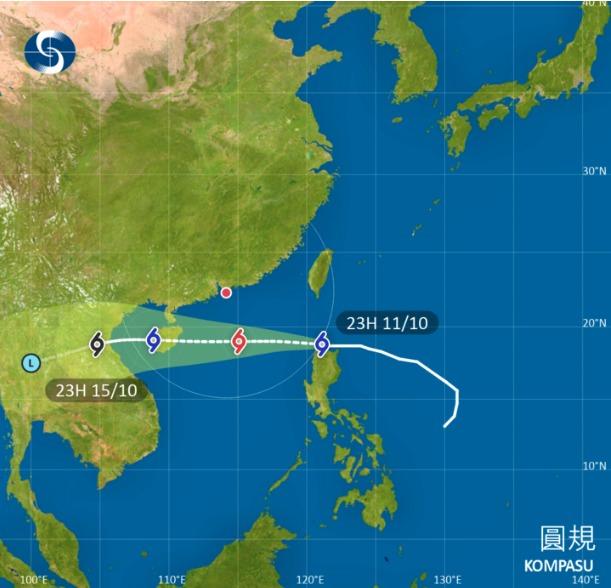 This screengrab taken from the official website of the Hong Kong Observatory shows the forecaster's track of tropical cyclone Kompasu as of 1 am on Oct 12, 2021.

HONG KONG - The Hong Kong Observatory raised the typhoon signal No 3 shortly after midnight on Tuesday as tropical cyclone Kompasu neared the city.

The HKO raised the Strong Wind Signal No. 3 at 12:40 am, which means that winds with mean speeds of 41 to 62 kilometers per hour were expected in Hong Kong, as Kompasu moves across the northern part of the South China Sea.

The Observatory said the Signal No. 3 will remain in force in the morning.

“The outer rainbands associated with Kompasu will start to affect the coast of Guangdong later today. The local weather will deteriorate significantly, with heavy rain and squalls,” the HKO said.

Lee Tsz-cheung, HKO senior scientific officer, said in a press briefing on Monday afternoon that the No 8 typhoon signal might be hoisted on Tuesday or Wednesday when the winds reach gale force

At 1 am, Severe Tropical Storm Kompasu was estimated to be about 770 kilometers east-southeast of Hong Kong and is forecast to move west at about 25 kilometers per hour into the northeastern part of the South China Sea.

Close on heels of tropical storm Lionrock, which kept the No 8 typhoon warning up for 22 hours over the weekend, Kompasu is expected to skirt around 400 kilometers to the south of the territory early on Wednesday.

Lee Tsz-cheung, HKO senior scientific officer, said in a press briefing on Monday afternoon that the No 8 typhoon signal might be hoisted on Tuesday or Wednesday when the winds reach gale force. But factors such as the effect of the northeast monsoon, the strength of the typhoon and the circular ocean current cause uncertainties.

The HKO has drawn public criticism over its handling of storm warnings related to Lionrock. People blamed the weather forecaster for not immediately raising the typhoon signal No 8  on Friday when heavy rains caused flooding and hazardous work conditions. A woman worker was killed when scaffolding collapsed outside a building in Happy Valley on Friday.

Lee explained that the decision to issue typhoon warnings must meet certain conditions. “It’s impossible to foresee escalation of a warning hours beforehand, with the existing technology in the world. The best that can be managed is 10-40 minutes,” he said.