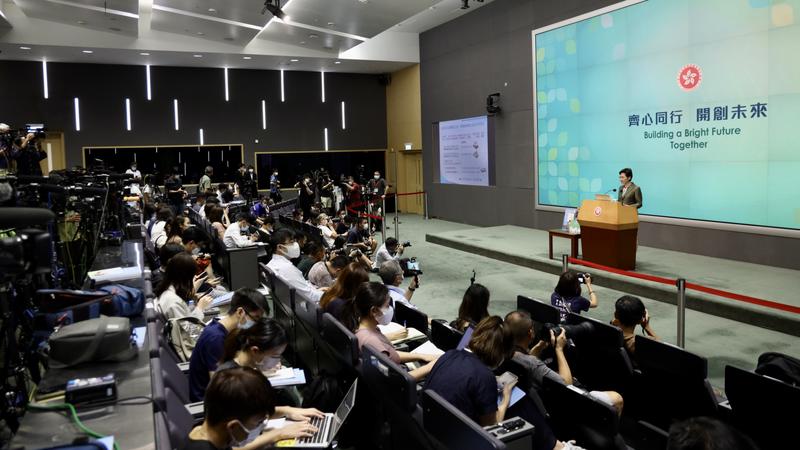 Hong Kong will develop the northern part of the New Territories into a sprawling metropolis to facilitate economic integration with Shenzhen and create a "second economic engine" for the city, as unveiled by Chief Executive Carrie Lam Cheng Yuet-ngor in her fifth Policy Address on Wednesday.

"Such integration can meet the needs of our economy and people's livelihoods, and create a quality environment for sustainable development. All these will help us better respond to the new opportunities brought about by deepened cooperation between Hong Kong and Shenzhen," Lam said, without discussing the total costs of the project.

"It's difficult at this stage to tell how much the government will spend in the 'Northern Metropolis' project. If the government is worried it does not have adequate capital to push it forward, it can consider issuing bonds to provide the funding," she told a press conference.

The "Northern Metropolis" will cover two district administration areas - Yuen Long District and North District - which have a total land area of about 300 square kilometers. The entire project is expected to take 20 years to complete

The "Northern Metropolis" will cover two district administration areas - Yuen Long District and North District - which have a total land area of about 300 square kilometers. The entire project is expected to take 20 years to complete.

For the Shenzhen Bay Quality Development Circle, a rail link between Hung Shui Kiu and Qianhai in Shenzhen will be built and a co-location arrangement will be implemented at Qianhai.

The San Tin Technopole will be the spotlight of the Hong Kong-Shenzhen Close Interaction Circle, facilitating the development of the information and technology industry ecosystem, along with cross-border transport projects.

Overall, the development plan will further develop about 600 hectares of housing and economic land, on which 165,000 to 186,000 residential units will be built and about 66,000 to 68,000 new jobs created in the information technology sector.

The "Northern Metropolis" is expected to accommodate 2.5 million people and provide about 650,000 jobs, including about 150,000 IT posts.

"The proposed 'Northern Metropolis' will create a critical mass and build a bigger community for residents to live and work in the hub. The conglomeration of activities within a hub will drive economic development and real-estate investments," said CBRE Greater China Head of Valuation and Consulting Rita Wong.

"The planned Qianhai-Hung Shui Kiu railway will be one of the most significant cross-border infrastructures linking Hong Kong and Shenzhen after the completion of the Guangzhou-Shenzhen-Hong Kong high-speed rail line, giving further support to the recently announced Qianhai economic zone's expansion plan," said Rosanna Tang, Hong Kong and Greater Bay Area head of research at Colliers.

"The rail link is expected to boost cross-border business and commuter flow and make Hung Shui Kiu a new strategic location," she said.