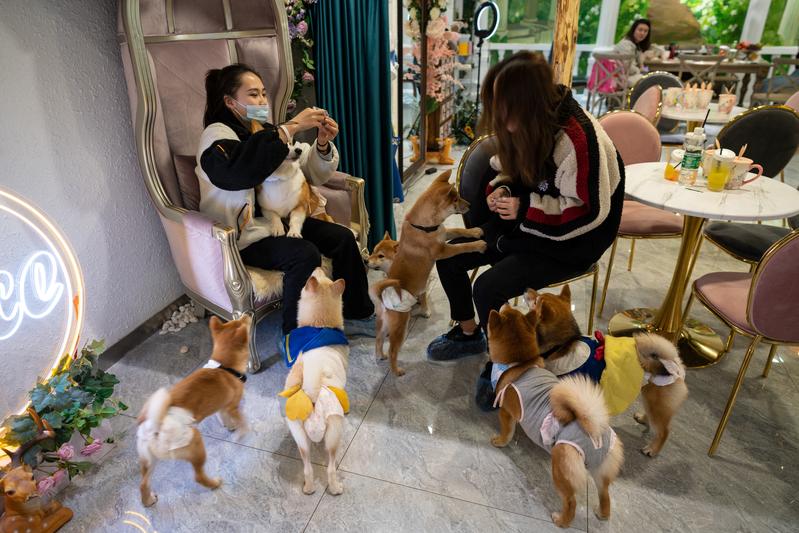 Shanghai resident Tang Yin and her 7-year-old daughter brought a puppy home from a pet adoption market in July after the girl had long wanted a dog.

"Several friends who are experienced pet owners told me visits to animal clinics may become more frequent when a dog ages, and sometimes the medical bills can be costly, so I took out insurance cover just in case," said Tang, 35.

Keeping pets has become more popular in Chinese cities in recent years, with nearly 100 million cats and dogs owned by families in urban areas. Owners are also now more willing to take their animals for veterinary treatment when they experience health problems.

Sixty-six percent of pets have received medical care at least once, according to the 2020 China Pet Medical Industry White Paper, which said the market scale of pet medical care reached 40 billion yuan ($6.2 billion) last year and is expected to exceed 130 billion yuan in 2025.

Wu Qingrong, who has worked as a vet in Shanghai for three decades, said: "Awareness among the younger owners for their pets to receive medication when needed is gradually rising. For example, some pet owners have their pet vaccinated and use parasite expellers on them regularly.

"But it will still take some time to cultivate awareness that pets need help in leading quality lives. The medical market for pets needs standardization in care, services and charges," said Wu, who is head of Shanghai Guochong Pet Hospital. 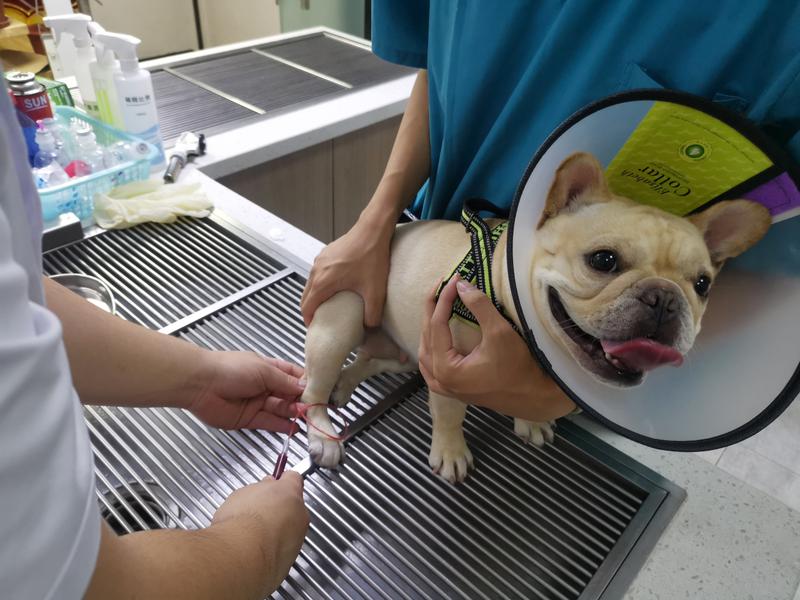 A dog is given a medical checkup in Shanghai. (XU FENG / FOR CHINA DAILY)

According to industry experts, taking out insurance for pets is commonplace in some countries.

In Sweden, at least 40 percent of pets are insured, while in the United Kingdom, the proportion is 25 percent. However, in China, less than 1 percent of pet owners buy health insurance for their animals.

The partners said they combined upstream and downstream players in an attempt to produce an insurance product catering to pet owners' needs. 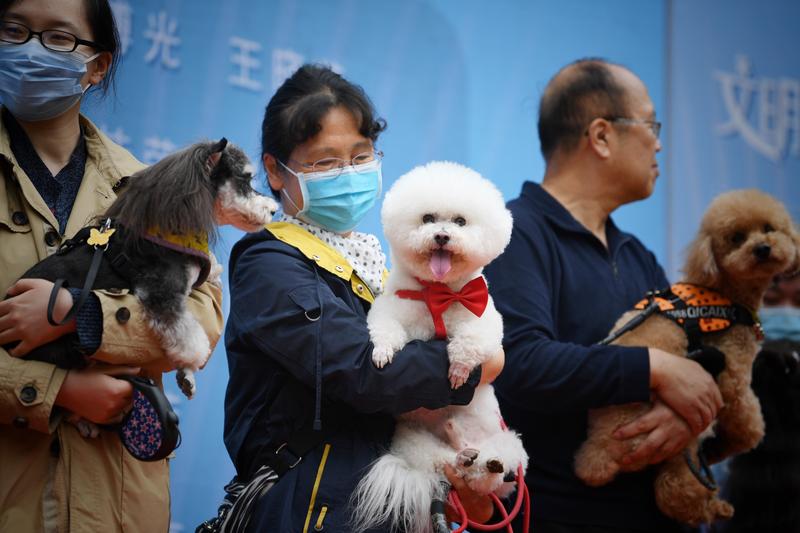 Owners in Beijing attend an event to demonstrate the correct way to raise dogs. (HAO YI / FOR CHINA DAILY)

Gong Qiao, deputy general manager of TK.cn's health insurance business department, said, "This new insurance product doesn't have a benchmark for pets' ages and doesn't mandate physical checkups for pets when registering them for it.

"In the near future, we plan to introduce insurance products that cover a wider range of common diseases among pets, and we're also considering the possibility of including pets' insurance in family health cover," she said.

Chen Zhishuang, marketing director of New Ruipeng, said the company had noticed some problems in the market. These include pet owners stopping medical treatment for their sick animals due to expensive bills, and some pets not receiving adequate treatment because of a shortage of equipment at clinics.

The new insurance product was devised to help solve such problems, Chen said.

Vets said the number of pet clinics has risen significantly in recent years, with Wu estimating that 10 to 20 such establishments open in Shanghai every month. 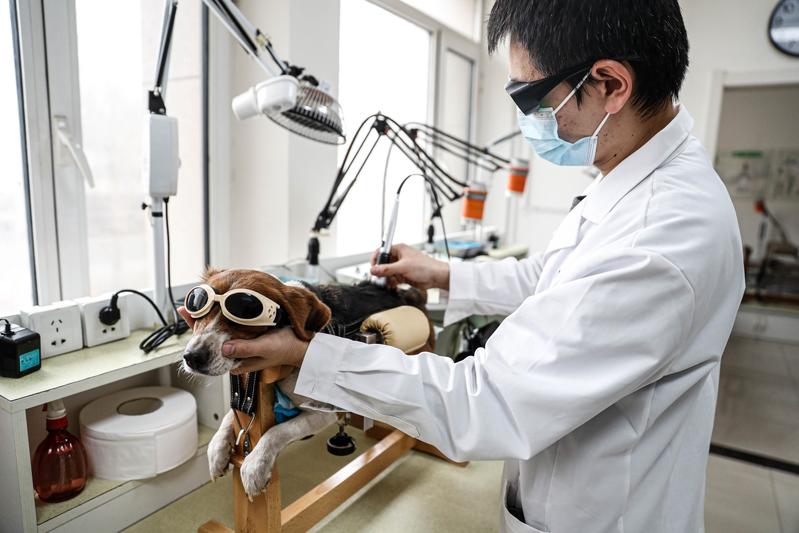 Some industry observers said increased sales of pet medicine pale in comparison to those for pet food.

Lu Qin, head of companion animals business at Boehringer Ingelheim China, said, "Parasite expellers should be used on pets every month, but our sales records show that owners only buy such products two or three times on average a year.

"However, we believe that increased pet healthcare coverage will continue, as health requirements come right after the need for food. Also, when people, especially the younger generation, pay more attention to their own health, they will develop a stronger awareness of the need to look after their pets," Lu said.

In April, a report released by the Suning Institute of Finance showed that more than 40 percent of pet owners in China are younger than 35.

Animals health experts said some diseases in pets may begin well before owners realize their animals are ill. Physical checkups, which many owners view as unnecessary, are the right approach to detecting diseases at an early stage. 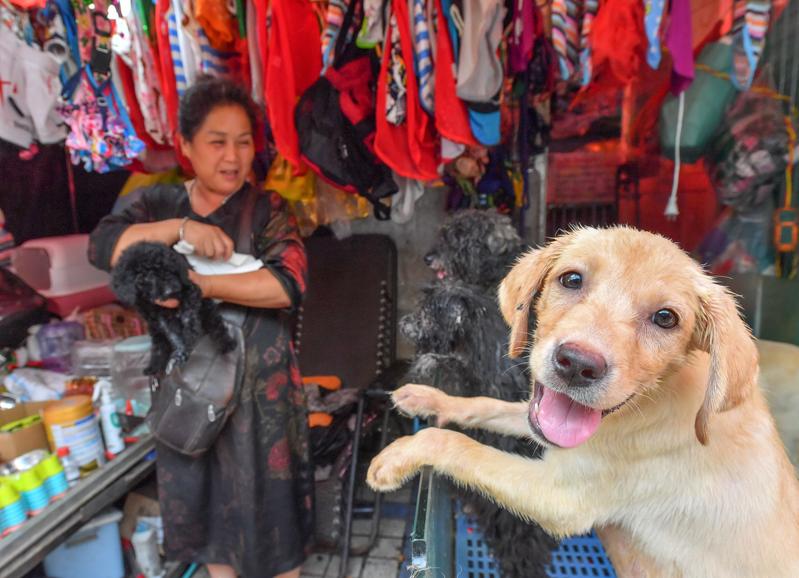 The experts said most dogs enter middle age when they are about 6, and their risk of heart disease rises from this point.

The experts said there is a high incidence of chronic kidney disease among cats, which is experienced by more than 80 percent of such animals age 15 or older.

Lu said the number of pet cats in China has risen sharply, and the reasons for this may include young people's living conditions and tight work schedules in big cities.

"This is also one of the main reasons age-related diseases among dogs have become a more urgent problem than those among cats," he said. 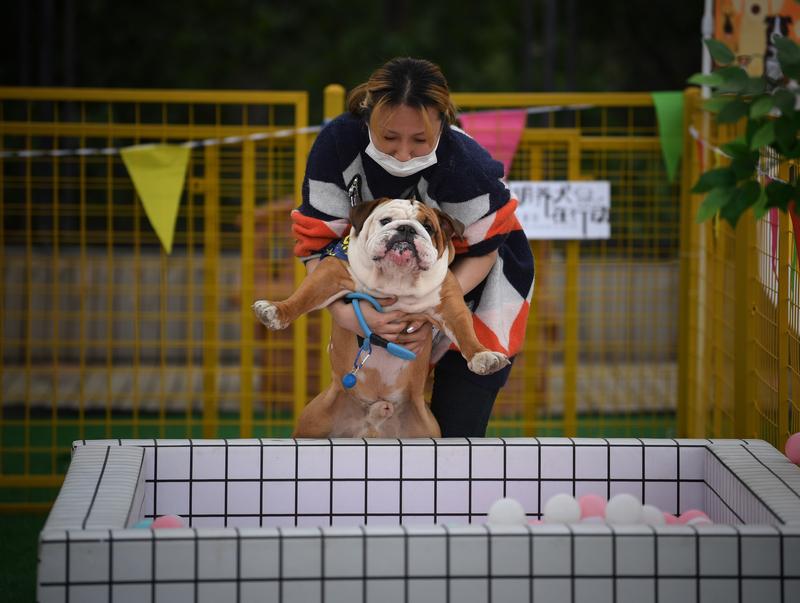 A pet owner and her dog take part in a sports event for animals in Beijing. (HAO YI / FOR CHINA DAILY)

Chen Xinyu, a Shanghai resident who has kept five dogs over the past 10 years or so, said the lack of drugs to treat pets is one of the main problems for many owners.

One of her dogs, a golden retriever, died of skin cancer two years ago, age 10.

"The vet said it was not a rare type of cancer. In some countries, there are a variety of medication options, but there were none in the domestic market," said Chen, who is in her 40s.

"Also, painkillers are essential in many cases, such as post-surgery treatment and easing pain for pets with cancer, but it is hard to find such drugs in China."

Chen said some vets from Australia and European countries who work in the pet clinics she uses secretly bring in drugs from overseas to treat animals.

A vet who has worked in Shanghai for 10 years and wanted to be named only as Amos said that in China there is no legitimate approved domestic or foreign drugs to treat at least half the common diseases among pets.

"Therefore, it's common practice for vets to use drugs for humans on animals when necessary. This is against the law, but if we don't do this, it becomes almost impossible to medically treat pets," he said.

Vets said that two decades ago, when abandoning the use of drugs for humans on animals was included in legislation, it mainly referred to using them for poultry and livestock, as this may eventually lead to humans becoming resistant to some medicines. 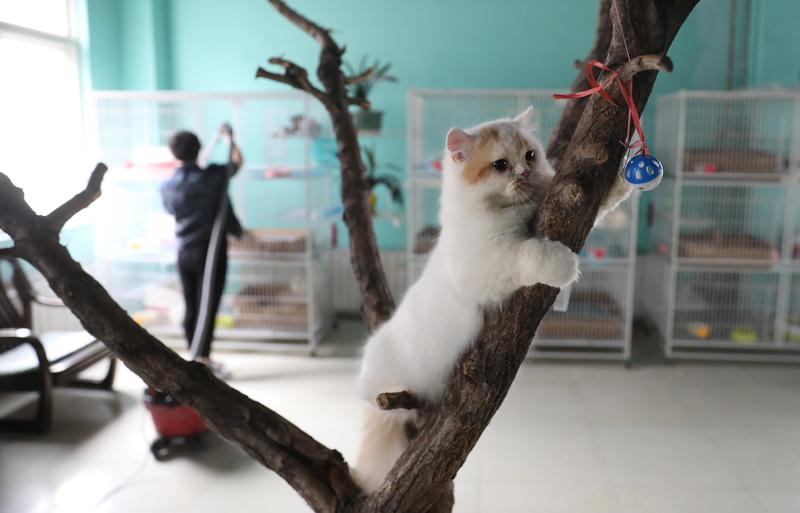 A cat climbs a branch at a pet breeding center in Anshan, Liaoning. (YAO JIANFENG / XINHUA)

The vets said there is limited availability of drugs for domestic pets, and some drugs produced by overseas manufacturers are expensive. This explains why some owners prefer drugs for humans being used on their pets, as they feel that these are not only less expensive, but safer.

Amos said, "For example, there are imported insulin products for pets with diabetes. A pack for use on an average-sized dog for around 20 days costs more than 500 yuan, but such a product made by a mainstream domestic company for use on humans costs just 75 yuan."

Wu, the Shanghai vet, said "relatively mature products" are being used for vaccination and to rid pets of parasites, but there are few therapies available to help animals, for example, with their breathing, digestion and skin conditions.

"I believe the authorities have noticed this demand and will implement encouraging policies for the production of drugs for pets. Changes will happen," he said.

Early this year, several listed biotechnology companies, including Pulike, based in Henan province, Hvsen from Hubei province, and Vland, which is based in Shandong province, unveiled plans to develop drugs and vaccines for pets.

Industry insiders said drug development takes time, and the domestic market is at the incubation stage.

Vets said they expected a series of standards and regulations to be introduced to protect pet clinics and pet owners.

Wu said the cost of appendectomy surgery for a pet in a city may vary considerably based on the medical devices and other facilities that are available, rather than any standardized market charge.

"What's worse, if a pet dies after receiving certain medical treatment, the owners very often come to the clinic and ask for compensation," he said.

"In hospitals for humans, there are arbitration organizations to deal with such disputes and verify if doctors and nurses are to be held responsible, but it seems hard for we vets to defend ourselves," he said.

Yang Hong contributed to this story.