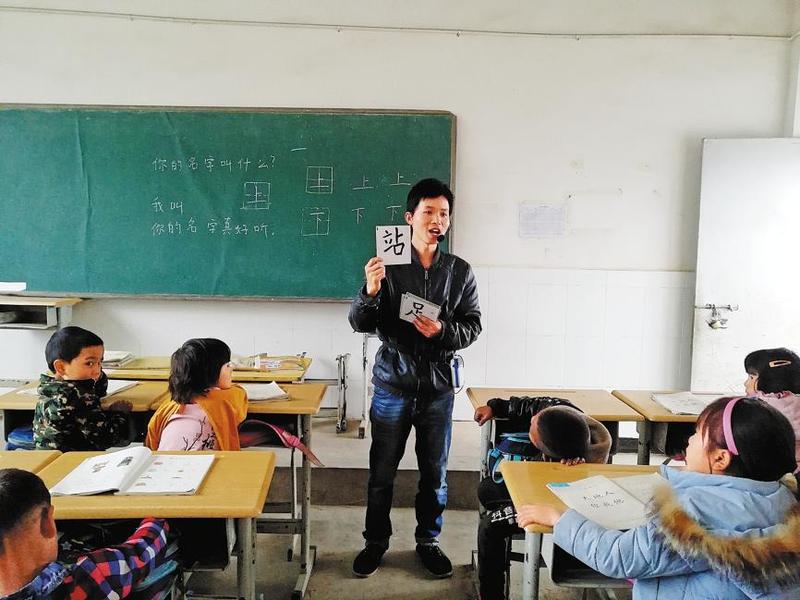 Hou Changliang volunteered to teach at Xiangyang Primary School in a remote village in Yunnan province in August 2017. There was just one problem. The local government wanted to close the school due to inadequate teacher supply.

China plans to train more high-quality teachers for less-developed regions to improve education in central and western parts of the country, according to a notice issued by nine central govt departments

There were just three temporary teachers for about 100 students across four classes. Shutting down the school meant that the students would have to go to another school far from their homes. Hou's arrival helped keep the school open.

It is the third village school that Hou, 34, has taught at since he graduated from Hunan University of Arts and Science in Changde, Hunan province, in 2011. Before Xiangyang Primary School, he had taught in Hechi, Guangxi Zhuang autonomous region, for four years, and in Bijie, Guizhou province, for two years.

"The longer I stayed in the countryside, the deeper I understood the challenge in rural education. Rural schools need teachers, especially good ones," Hou says, adding that a good teacher can make a real difference in a student's life and can even change a village.

As a volunteer teacher, he receives a monthly allowance of about 800 yuan ($124). This has remained unchanged for the past 10 years.

Hou has witnessed the improvement in village schools over the past decade－from makeshift classrooms to renovated school buildings and from shabby desks to advanced equipment, like computers. But Hou's school still suffers a teacher shortage. 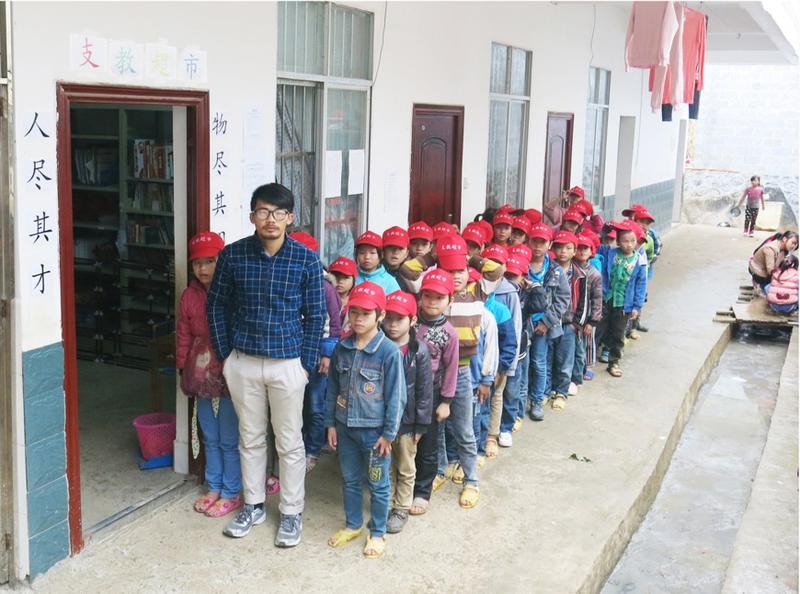 In November, Hou married fellow teacher Lei Yudan. The wedding photos with their students went viral on social media. They were dubbed "the most beautiful wedding photos" by people online. The couple hopes their photos will help attract quality teachers to the countryside.

On video-sharing platform Douyin, Hou posts images of his everyday life with students, which have attracted nearly 300,000 followers and garnered more than 7.3 million likes. His story has made national headlines.

"What I can do is limited. Through media coverage and social media, I hope that my story can inspire more people to understand and support rural education, especially rural teacher groups," Hou says.

Hou is among the hundreds of thousands of university graduates who apply for various volunteer programs every year to contribute to rural education in the impoverished central and western parts of China. But he is in the minority who have stayed in the countryside for more than 10 years.

Born into a poor family in Dongkou county, Hunan province, Hou knows how difficult it is for rural students to pursue higher education. He has an elder brother and a younger one.

In 1997, when Hou was in grade four, Hou's father had to take a job at a construction site in remote Guangdong province to make ends meet. This was a common phenomenon in the countryside, with an increasing number of farmers flocking to big cities to seek a higher income and leaving their children in the village. Official statistics show that, in 2020, China had a total of 6.4 million "left-behind "children in the countryside, compared with 58 million at the peak of the migration in 2008.

In 2000, when Hou and his elder brother entered junior high school, the family could not afford tuition fees for all three children, so the elder brother quit school and went to Guangdong to support the family.

"My brother washed cars in Guangdong. In the first two years, he earned only 150 yuan per month, most of which he saved and sent back home," Hou remembers, adding that, even as a child, he knew he had to study hard, not only for himself, but also for the family.

When he was about to graduate from Hunan University of Arts and Science as a computer studies major in 2011, Hou faced a difficult choice－to become a volunteer teacher in an impoverished area or to become an IT engineer in a big city with a decent salary. 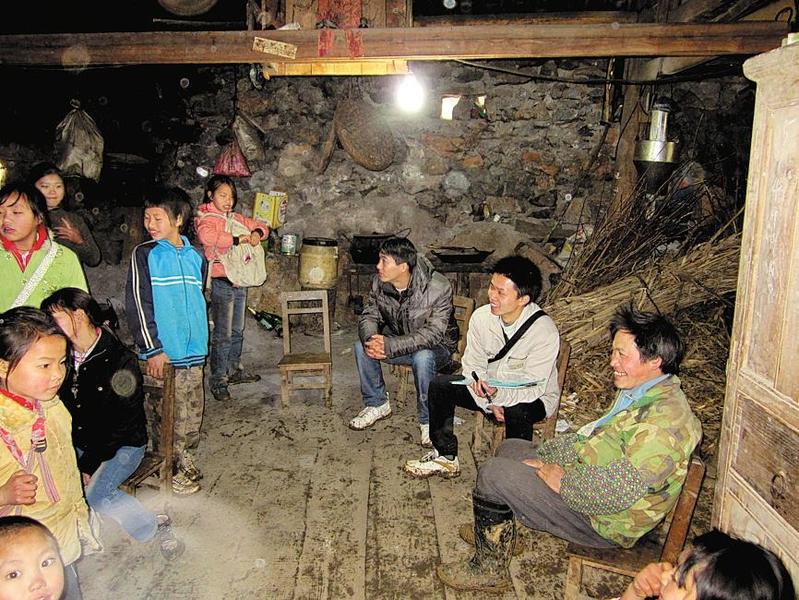 Hou (second from right) visits a pupil's home in 2012, when he was teaching at Youqi Village Primary School in the Guangxi Zhuang autonomous region.(PHOTO PROVIDED TO CHINA DAILY)

When it comes to helping develop rural education, the first thing most people think of is to donate items, such as desks, books, clothing and even money.

However, Hou found this approach and mindset has its drawbacks and may even foster a mentality of expectation.

"It takes time and effort to change students' attitude toward donations and get them to learn to paddle their own canoe," the teacher says.

It is not a rare case. Yang Feifan, a volunteer teacher of nine years at Changdong Primary School in Guangxi's Bama county, faced a similar situation in his second year at the school.

"That year, we received various donations from across the country. How to allocate them posed a question. I didn't want the students to get unearned things, so I came up with an idea to open a supermarket selling these donations. Students can buy or rent things through their labor, like cleaning classrooms, cooking or helping others," Yang says.

"I believe that good education should not be limited to textbooks, but expand to basic life skills and how to be a responsible person," the 34-year-old says.

According to market-research firm Zhiyan Consulting, as of 2019, there were about 89,000 rural primary schools serving nearly 25.6 million students across the country, about 24 percent of the national total.

Although the dropout rate in rural elementary schools has decreased dramatically, Hou suggests it is time to change people's mindset about village education.

In his opinion, the first thing to adjust is the textbooks, which should not adopt a one-size-fits-all approach. The textbooks for villages and cities are basically the same in China.

"Once a student asked me what an amusement park is after seeing it described in a textbook, which made me think about our education materials," Hou says, adding that if rural content is not covered in textbooks, these young people might not be able to relate to the content or feel proud of their villages.

"The skyscrapers, airports and fancy highways in the textbooks are far away from the students' life, which may plant a seed in student's mind that the city is good and advanced, while the village is not," Hou says.

In that case, there will be fewer people willing to contribute and build the countryside. 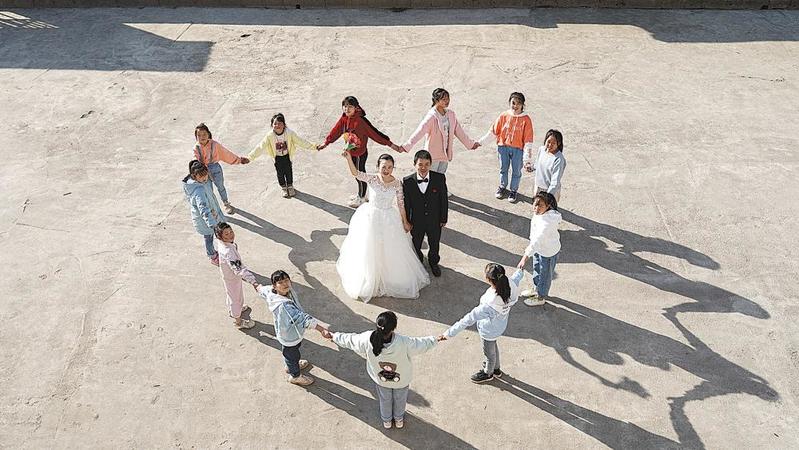 The good news for village teachers like Hou and Yang is that authorities have taken various measures to improve rural education.

In September, the Ministry of Education and five other departments released a guideline to improve the number and quality of rural teachers over the next three to five years.

This will be achieved through more favorable policies such as improving salaries and offering better career prospects.

It reiterates that the salary for rural teachers should not be less than that of local government officials and extra subsidies will also be given.

China plans to train more high-quality teachers for less-developed regions to improve education in central and western parts of the country, according to a notice issued by nine central government departments last month.

According to the notice, about 10,000 students will be trained each year to become teachers in underdeveloped counties starting from this year.

Without needing to pay tuition or accommodation fees and receiving subsidies for living expenses, these trained students from top-level normal universities will need to sign a contract in which they commit to teach at schools in underdeveloped areas for at least six years, and any breach of that contract will be included in their social credit record.

More than half of the 2.9 million rural teachers across the country have a bachelor's degree or higher and 43.4 percent of them are less than 35 years old, according to official data.

Although rural education has improved over time, rural students are far less likely to enter college than their urban counterparts. This year, among the 4,402 freshmen entering Peking University, 442 are from the countryside, according to the school's statistics.

"There is still a long way to go to enhance the quality of rural education," Hou concludes. 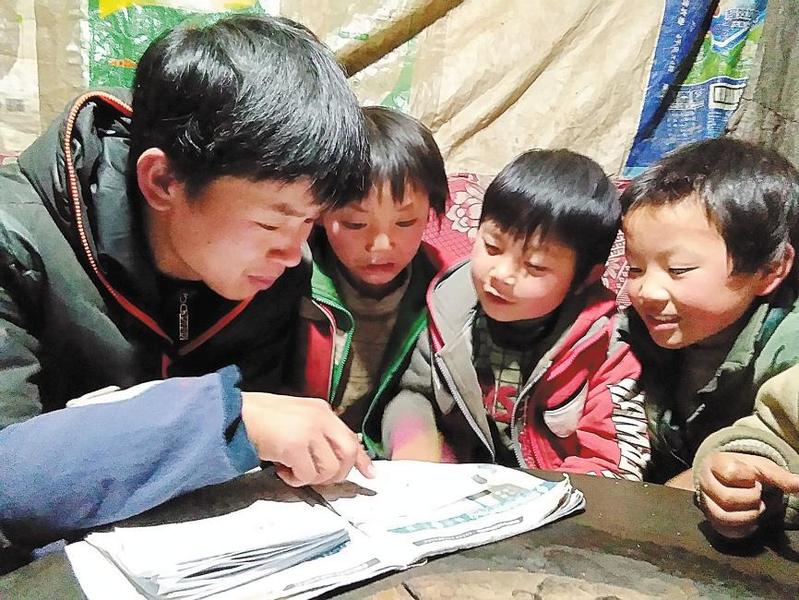 Hou Changliang creads to his pupils after class in 2018. (PHOTO PROVIDED TO CHINA DAILY)