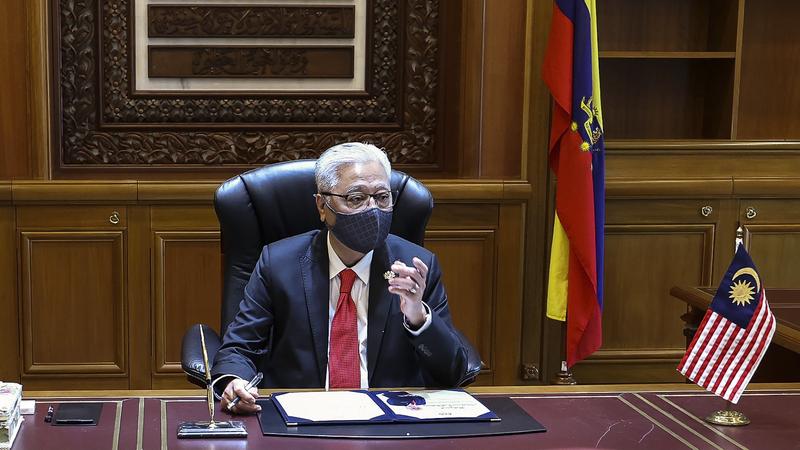 In this photo provided by Malaysia's Department of Information, Malaysia's new Prime Minister Ismail Sabri Yaakob sits at his desk on his first day at the prime minister's office in Putrajaya, Malaysia, Aug 23, 2021. (FANDY AZLAN / MALAYSIA DEPARTMENT OF INFORMATION VIA AP)

KUALA LUMPUR - Malaysian Prime Minister Ismail Sabri Yaakob has voiced his concerns that the newly-established security partnership among Australia, the United Kingdom and the United States (AUKUS) would raise tensions and spark a regional arms race.

In a phone call with his Australian counterpart Scott Morrison, Ismail Sabri warned that the partnership, which would arm Australia with nuclear-powered submarines, would provoke other powers to also act aggressively in the region, especially in the South China Sea, according to a statement by the Malaysian Prime Minister's office on Saturday.

"As a country in ASEAN, Malaysia holds the principle of maintaining ASEAN as a Zone of Peace, Freedom and Neutrality," he said, urging all parties to avoid any provocation as well as arms competition in the region, and emphasized the importance of respecting and maintaining the status quo.

The United States and Britain said recently that they will share highly sensitive nuclear submarine technology with Australia, a key part of the three countries' newly-established security partnership AUKUS, which is a violation of the Treaty on the Non-Proliferation of Nuclear Weapons (NPT).

With over 190 signatories worldwide, the NPT has shown the international community's commitment to preventing the dispersal of nuclear weapons and promoting cooperation in peaceful uses of nuclear energy.