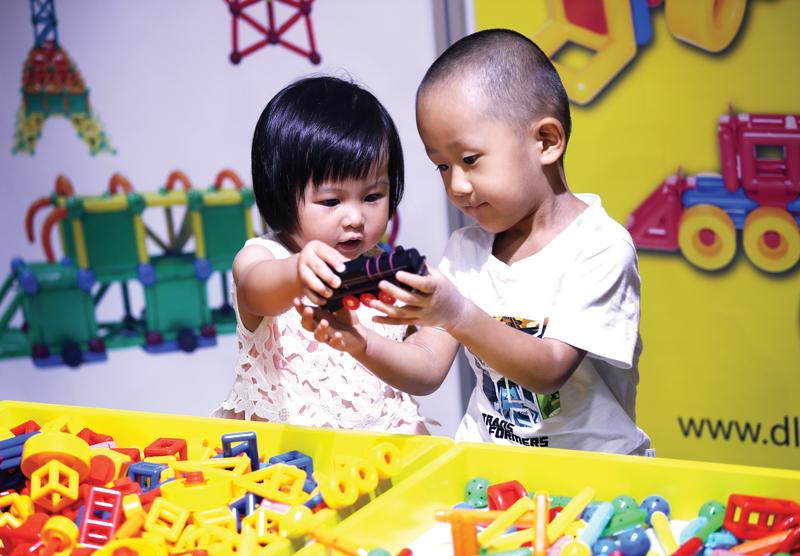 Children play with a toy train at a toy fair in Beijing. China’s policy to allow all married couples to have a third child is expected to help expand the market scale of maternity and baby products. (ZOU HONG / CHINA DAILY)

China’s policy to allow all married couples to have a third child, announced on May 31 with a view to offset any possible effects of an aging population on both the economy and society, has elicited mixed responses from people.

Financial considerations and work-related pressures appear to be weighing on the minds of most married couples in urban areas, dissuading them from going in for a second or third child.

Raising more children is not an easy task — in terms of the time, energy and money required — some couples said.

Yet, among all age groups, many well-off young Chinese, especially parents born in the 1990s, have shown a relatively strong willingness to have three children, a recent report found.

Most of them are single-child families — and they long for a sibling or two for their only child, and think having multiple kids in the family is the way toward happiness.

In terms of income, those with an annual family income ranging from 800,000 yuan (US$123,024) to 2 million yuan indicated the highest willingness to have a third child, according to a poll conducted by the China Index Academy, China’s largest independent property research organization.

The third-child policy was announced three weeks after China released its latest census, which showed the country’s population was growing at its slowest rate in decades.

In late July, the State Council Information Office held a news conference and gave further explanations about the third-child policy. Authorities have promised cheaper child-rearing and education options as part of the measures to facilitate the implementation of the policy.

By 2025, a comprehensive support system will be established to “significantly reduce” child-rearing costs. The National Development and Reform Commission, the country’s top economic regulator, said it is working with other departments to build a “fertility-friendly society”.

The move is a major bid to reverse the country’s falling birthrate and turn around an aging population in the world’s most populous nation, industry mavens said.

In the 14th Five-Year Plan period (2021-25), the government aims to bolster the fertility rates by helping families alleviate the costs of giving birth, raising children, and meeting the kids’ school and university education expenses. And more supportive policies are expected to be rolled out, according to the plan.

“In the short term, the third-child policy is foreseen intensifying desire for childbearing, driving the structural growth of the consumption market. In the long term, the relaxation of the family planning policy is expected to alleviate the pressure emerging from an aging society in China,” said Li Jincan, an analyst at the LeadLeo Research Institute, a market research provider.

In 2016, China relaxed its 35-year-old single-child policy in favor of a second-child policy. That encouraged Chinese couples to give birth to more than 10 million second children, according to China’s latest national census.

Still, increasingly, Chinese women are getting married later and delaying their motherhood, fueled by constant economic growth and a change of lifestyle.

“Low fertility rate is a result of economic and social development. The fertility rate is affected by policy factors, and it is also affected by economic, social and cultural factors. The influence of the latter factors is gradually increasing in China,” said Ning Jizhe, head of the NBS, at a news conference in May.

“With continuous social development and economic growth, people’s notion of childbearing has changed, especially as a result of industrialization and modernization. Low fertility rate has become an issue that is widely faced by most developed countries, and it’s going to become a practical problem in China,” Ning said.

Meanwhile, the number of women who are in a suitable age to give birth is declining. According to United Nations data based on the number of fertile women aged between 15 and 44, the population of women in this age group in China started to decline in 2008.

When women give birth at an age of 35 or older, they would be defined as expectant mothers in an older age, according to medical definition in China. For those who have the willingness to have three children, it is highly likely that they would have turned 35 or older at the time of giving birth to the third child.

With advancing age, the rate of women getting pregnant and safely giving birth decreases. Thus, the demand for follicle-stimulating hormonal treatment and other assisted reproductive services is expected to increase gradually, said Li of LeadLeo.

Between 2020 and 2023, the compound annual growth rate of the domestic assisted reproduction market is expected to reach 14.5 percent. By 2023, sales are foreseen to reach 49.6 billion yuan, according to a forecast by Guoyuan International Holdings Ltd.

Such forecasts are driving the future plans of enterprises such as Jinxin Fertility Group Ltd, a Chengdu-based and Hong Kong-listed company that provides assisted reproductive services in China.

Jinxin Fertility Group provides services like artificial insemination and in vitro fertilization. IVF accounts for a larger part of its business. Besides, it provides nutritional guidance and psychological counseling services to support the assisted reproductive business, the company said.

Last year, the number of IVF treatment cycles at Jinxin Fertility reached 22,879. It also offers its services in the United States where much of the demand for its services comes from the West Coast, it said.

The company also said the third-child policy and the implementation of attendant supporting measures are expected to help create more business growth opportunities for the assisted reproductive services sector.

“It has been less than two months since China announced its new third-child policy. A pronounced effect is yet to be discerned. In the long term, however, the policy is expected to promote population growth to a certain extent in China,” said Jinxin Fertility, in a written reply in July.

“Among those women who are willing to get pregnant, some of them are in a higher age range. As fertility rate declines with age, it’s likely that more people may seek assisted reproductive services. With the strengthening of national supervision of the application of assisted reproductive technology, the sector barriers will also continue to rise.”

In addition, the third-child policy is expected to have a long-term impact on some other related sectors, such as pharmaceuticals, biotech, food and beverage, textiles and clothing.

The potential growth in the number of newborns is expected to help expand the market scale of infant formulas, toys, car seats, strollers and other maternity and baby goods, and would be favorable to the development of those sectors, LeadLeo said.

Maternity and infant goods consumption sectors are likely to continue finding favor with investors. Those sectors include medical examination equipment and medicines that help with pregnancy preparation; infant and baby food; supplements and diapers; children’s consumption areas like toys, clothes, animations and education.

On the day the third-child policy was announced, stock markets in Shanghai, Shenzhen, Guangdong province, and Hong Kong cheered the news with a big thumbs-up.

Shares of children’s products maker Goodbaby surged as much as 31 percent in Hong Kong, while those of infant formula maker Beingmate rose 8 percent in Shenzhen.

Besides, apartment and car retailers may see higher demand from enlarging families wishing to upgrade to roomier flats and multipurpose vehicles, according to a research report from Ping An Securities.

Last year, about 930,000 maternity and baby product makers newly registered their businesses in China, up 52 percent year-on-year, indicating fierce competition in the market, according to Tianyancha, a business information provider.