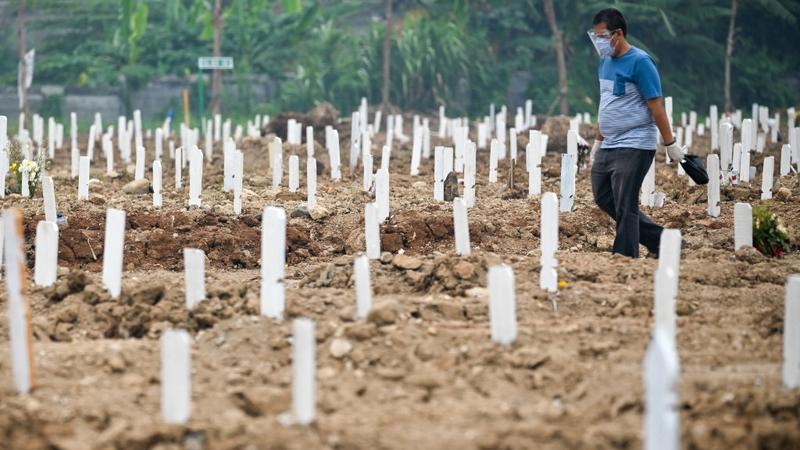 A family member visits his relative's grave at a cemetery for coronavirus victims in Rorotan, Jakarta, on July 22, 2021. (BAY ISMOYO / AFP)

TOKYO / SINGAPORE / SYDNEY / JERUSALEM / NEW DEHLI / BANGKOK / SINGAPORE / WELLINGTON / MANILA / JAKARTA / KUALA LUMPUR / DHAKA / SUVA / ISTANBUL / SEOUL - The COVID-19 death rate for people in the Indonesian capital of Jakarta who were not vaccinated was more than three times higher than those who were, according to new health ministry data.

The mortality rate of those who were not vaccinated was 15.5 percent compared with 4.1 percent for those who had received two shots of either the Sinovac or AstraZeneca vaccine, according to data from state hospitals and almost 68,000 patients in Jakarta from May to July.

Data from the town of Banyuwangi on Java island, showed that 93 percent of COVID patients who died from March to July were not vaccinated, while 6 percent had received a first dose, and 1 percent had been fully vaccinated.

In Indonesia, 18 percent of the population have had one dose of a vaccine, while 8 percent are fully vaccinated, according to health ministry data. Indonesia has had 100,600 deaths.

Grappling with the spread of the highly transmissible Delta variant that was first identified in India, Indonesia has quickly become Asia’s coronavirus epicentre, now recording more than 3.5 million cases in total since the start of the pandemic. 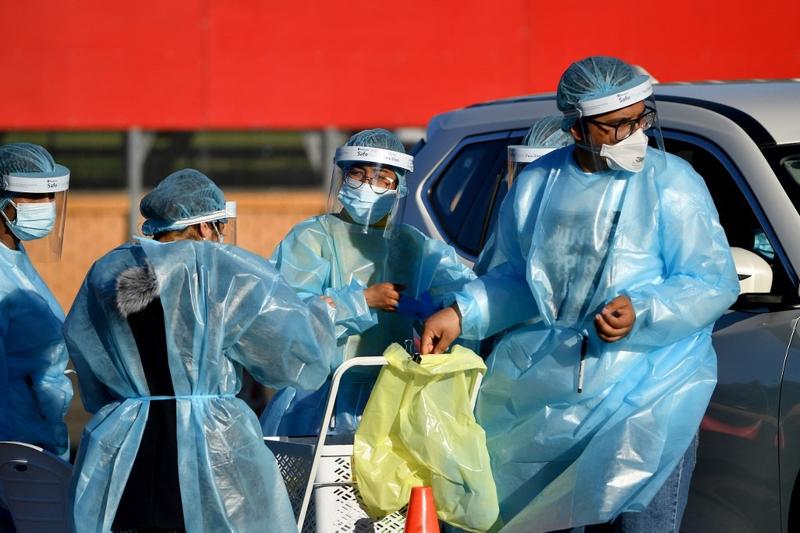 About two-thirds of Australia’s population is in lockdown as the Delta variant spreads across the nation, with authorities in Melbourne enforcing stay-at-home orders for the sixth time since the pandemic began.

Melbourne and the rest of Victoria state will enter a seven-day lockdown from 8 pm local time on Thursday after eight new infections were detected in the past day, Premier Daniel Andrews told reporters. Sydney, meanwhile, has issued stay-at-home orders until at least August 28.

“There are no alternatives,” said Andrews, who last year presided over one of the world’s longest and strictest lockdowns in Melbourne, which only emerged from its most recent round on July 28. “If you wait, it will spread. And once it spreads, you can never even hope to run alongside it, let alone get out in front of it and bring it back down to zero.”

The lockdowns show the limits of Australia’s so-called “COVID-zero” strategy, which has relied on closed international borders and rigorous testing to eliminate community transmission of the virus. Its economy, particularly the domestic tourism and retail sectors, is increasingly being hit by the outbreaks.

The move by Melbourne authorities comes on the same day that New South Wales state reported 262 new infections - a record number since the highly contagious variant leaked into Sydney’s community in mid-June. Five more people died, and four of them weren’t vaccinated, Premier Gladys Berejiklian told reporters in the city, which has been in lockdown for almost six weeks.

The outbreak’s spread to other regions of New South Wales saw Berejiklian on Thursday announce that the Hunter Valley region -- including Newcastle, a city of around 500,000 people - will be placed into a one-week lockdown.

The Indian government has asked state authorities to impose restrictions ahead of festivals across the country, warning that overcrowding could lead to "super spreader" events and a new surge in infections.

India has reported an average of 30,000 to 40,000 new coronavirus cases every day since July, and the federal government has warned that although cases have dipped from a high of 400,000 daily at the peak of the deadly second wave, the danger has not abated yet.

"The Indian Council for Medical Research (ICMR)... have expressed concern regarding the potential of mass gathering events during festivals turning into super-spreader events, thereby leading to a spike in COVID cases," federal health secretary Rajesh Bhushan said in a letter to state governments released late on Wednesday.

Jolted by the devastating second wave that killed thousands in April and May, Prime Minister Narendra Modi's government has asked states to be cautious while opening up their stringent lockdowns this time around, saying the second wave was not yet over.

The western state of Maharashtra, which was the worst-affected in the second-wave, has significantly eased restrictions in the last month. The state is still reporting the second-highest caseload in the country, behind Kerala. 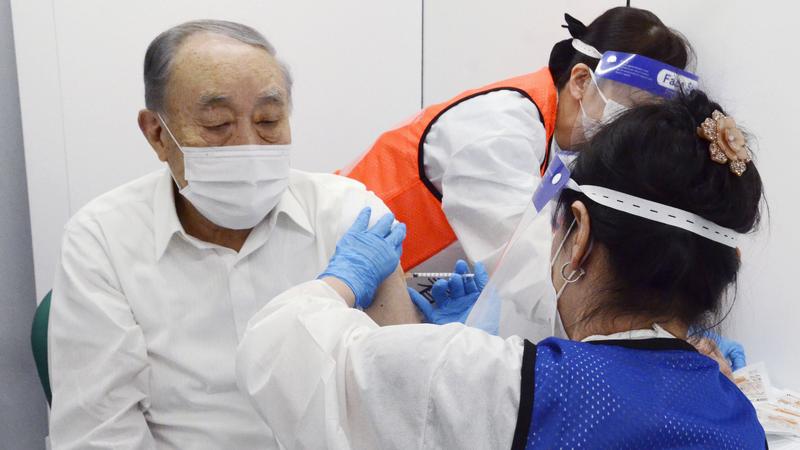 An elderly man receives a shot of the Pfizer's COVID-19 vaccine in Nagoya, Aichi prefecture, central Japan on April 14, 2021. (KYODO NEWS VIA AP)

Japan decided on Thursday to expand its COVID-19 emergency curbs to cover more than 70 percent of the population, as a record surge in cases strained hospitals in the Olympics host city Tokyo and other parts of the country.

Suga announced the new steps - which are mostly voluntary, unlike strict lockdowns overseas - as new daily cases in Tokyo hit a record 5,042. Nationwide new cases topped 15,000 for the first time, while medical advisors to the capital said the Tokyo figure could double in two weeks, NHK public TV reported.

"The situation on the ground (at hospitals) is extremely severe," Economy Minister Yasutoshi Nishimura told a panel of experts before Suga's formal announcement. He said serious cases had doubled in the past two weeks.

The death toll from the coronavirus in Israel rose by eight to 6,503 on Wednesday, the Ministry of Health said.

The number of active cases rose to 24,268, the highest since March 16, while the number of patients in serious condition rose from 221 to 234, the ministry added.

A total of 262,563 people in Israel have received the third dose of the COVID-19 vaccine in four days, according to the ministry's statement on Thursday.

Thailand reported on Thursday a record 20,920 coronavirus cases, bringing total cases in the Southeast Asian nation to 693,305 since the pandemic began last year. 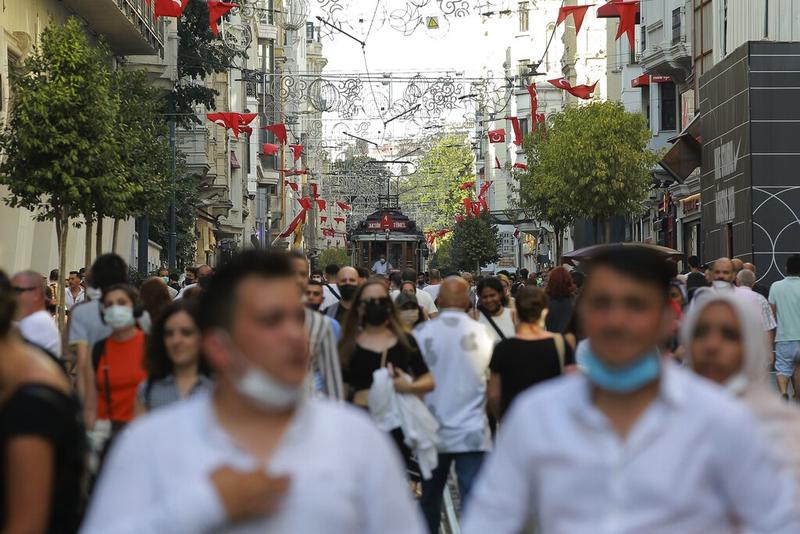 Turkey on Wednesday registered 26,822 new COVID-19 cases, raising its tally of infections to 5,822,487, according to its Health Ministry.

More than 74.6 million citizens in Turkey have taken at least one dose of the COVID-19 vaccine amid rising daily infections, the ministry said Thursday.

South Korea plans to invest 2.2 trillion won (US$1.9 billion) to become one of the world's five largest COVID-19 vaccine manufacturing bases by 2025, its President Moon Jae-in said on Thursday.

The remarks were made at a meeting of a public-private committee created to explore ways to boost vaccine production amid global supply shortages and shipment delays, Moon's office said.

Moon said he would designate COVID-19 vaccines as one of three national strategic technologies, along with semiconductors and batteries, aiming to ramp up investment, give tax breaks and offer other incentives to help firms localize materials, parts and equipment.

"We will strive to take a leap forward to become one of the top five global vaccine producers by 2025," Moon told the meeting.

The project aimed to nurture some 200 new medical scientists, 10,000 clinical trial professionals and 2,000 bio production workers every year, he said.

Health Minister Kwon Deok-cheol said the funds will also be used to support the development of homegrown vaccines, including securing original technology for mRNA products.

Singapore's Ministry of Health (MOH) reported 95 new COVID-19 cases on Wednesday, bringing the total tally in the country to 65,410.

There were three more imported cases, who had already been placed on Stay-Home Notice (SHN) or isolated upon arrival in Singapore.

A total of 555 cases are currently warded in the hospital. Most are well and under observation. There are currently 42 cases of serious illness requiring oxygen supplementation, and seven in critical condition in the intensive care unit (ICU).

There was a noticeable drop in marriages coinciding with COVID-19 alert level 4 when people are required to stay at home or move within 2 km from home to prevent community transmission of the virus, he said. 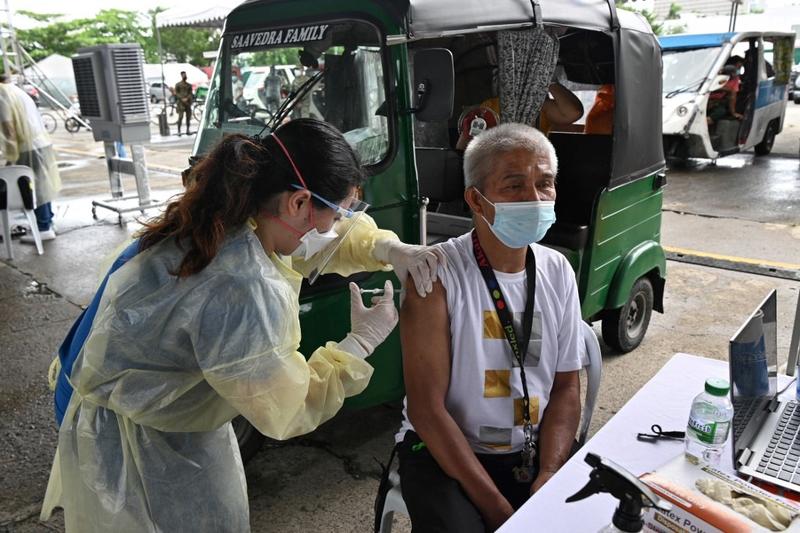 A volunteer medical worker administers a dose of the Sinovac COVID-19 vaccine to a tricycle driver during a vaccination drive for economic frontliners, organized by the vice president's office and city government, in Manila on July 20, 2021. (TED ALJIBE / AFP)

Chaos overtook several COVID-19 vaccination sites in Manila on Thursday as thousands showed up hoping to receive a shot before the Philippines capital heads back into lockdown for two weeks.

Movement restrictions will be reimposed across greater Manila, an urban sprawl of 16 cities that is home to 13 million people, from midnight on Thursday to try slow the spread of the highly infectious Delta variant.

The nearby province of Laguna, and the cities of Iloilo and Cagayan de Oro in the central and southern Philippines, respectively, will also be placed on lockdown, presidential spokesperson Harry Roque said in a statement, as health facilities are overwhelmed.

Photos on social media showed people jostling each other to be the first in line at vaccination centres, prompting police intervention to enforce social distancing rules.

Just 10.3 million people, or 9.3 percent of the Philippines' 110 million population, have been fully vaccinated. The government target is to immunize up to 70 million people this year.

The Philippines' Department of Health (DOH) reported on Thursday 8,127 new COVID-19 infections, bringing the total number of confirmed cases in the Southeast Asian country to 1,627,816.

The death toll climbed to 28,427 after 196 more patients died from the viral disease, the DOH added.

Malaysia reported 20,596 new COVID-19 infections in the highest daily spike since the outbreak, bringing the national total to 1,203,706, the Health Ministry said Thursday.

Health Ministry Director-General Noor Hisham Abdullah said in a press statement that 34 of the new cases are imported and 20,562 are local transmissions.

Bangladesh on Thursday recorded the highest single-day deaths from COVID-19 at 264, bringing the overall death toll to 21,902, said the country's Directorate General of Health Services (DGHS).

The official data showed 12,744 more confirmed cases were recorded in the country, raising the total tally to 1,322,654.