Chinese delegation first to win over 30 golds at Tokyo Olympics

By Wang Xu in Tokyo and Sun Xiaochen in Beijing 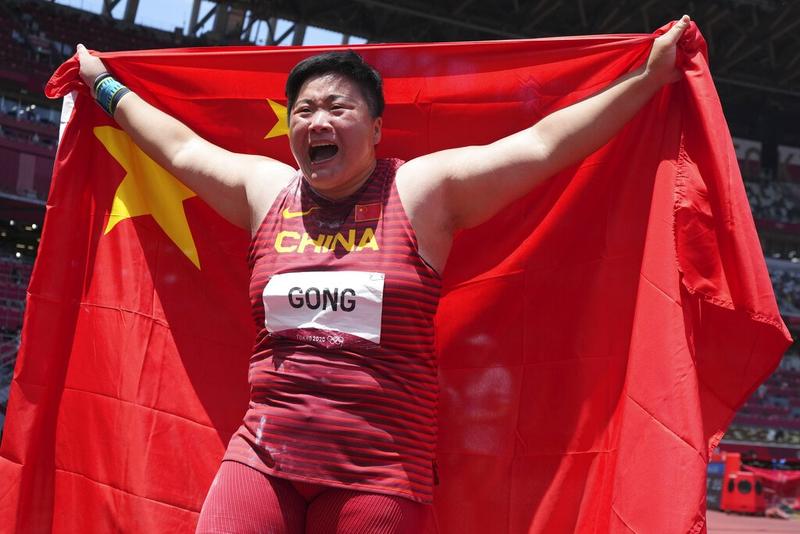 Gong Lijiao, of China, celebrates after winning the gold medal in the final of the women's shot put at the 2020 Summer Olympics, Aug 1, 2021, in Tokyo. (MATTHIAS SCHRADER / AP)

China became the first country to win more than 30 gold medals at the Tokyo 2020 Games, as victories came at the gymnastics venue and diving pool on Tuesday.

Chinese hammer thrower Wang Zheng won silver with a throw of 77.03m in the final, 1.45m behind gold medalist Anita Wlodarczyk of Poland

Team China leads the medal table with 32 golds, 21 silvers and 16 bronzes, ahead of the United States with 24 gold, 28 silver and 21 bronze medals.

At the age of 16, Guan became one of the youngest winners of the event after Shawn Johnson from the US, who won the balance beam at age 16 at the Beijing 2008 Games.

"I never expected that I would get a medal. My coach said, 'This is your first time in the Olympics and no one knows you, so just go ahead and do your best'," Guan said after her victory.

Despite her young age, Guan said: "I actually started gymnastics much later than other people, so I think this is a good result for me. Even though this competition is very tiring, I'm very happy with this result."

Tang took the early lead with 14.233 points for her routine. Biles moved into second after a clean and confident routine gained her 14.000. The American star, who won a team silver medal last week, has been in the spotlight after withdrawing from several individual events, citing mental health challenges.

ALSO READ: Tears of Wang Chunyu reveals the heart of a Chinese Olympian

Despite the pressure, Guan executed her routines to near perfection, earning 14.633 points to claim the gold.

"Although I won a gold medal this time, there's no way I could have done this on my own. It really was a worldwide effort to hold the Olympics, and so I would like to thank everybody who made a contribution toward that," Zou said.

In the diving pool, Xie Siyi took his second gold in Tokyo, winning the men's 3-meter springboard. He finished ahead of teammate Wang Zongyuan, with whom he had earlier partnered to win the men's 3m synchronized diving event.

The 25-year-old burst into tears after his win.

"It's really not been easy all these years," Xie said. "I feel like all the stress and burdens I was carrying were relieved in that moment (of victory)."

On the track, Wang Chunyu made history by finishing fifth with a personal best of 1 minute 57 seconds in the women's 800m final. It was the first appearance of a Chinese woman in a final of the event at the Olympics.

Chinese hammer thrower Wang Zheng won silver with a throw of 77.03m in the final, 1.45m behind gold medalist Anita Wlodarczyk of Poland.

Sprinter Xie Zhenye, the current Asian record holder in the men's 200m, failed to reach the final with a time of 20.45 seconds. Xie made history by becoming the first Chinese runner to reach the men's 200m semifinals at an Olympics.