Politics, drama as Biles, Belarus and NZ's Hubbard in focus 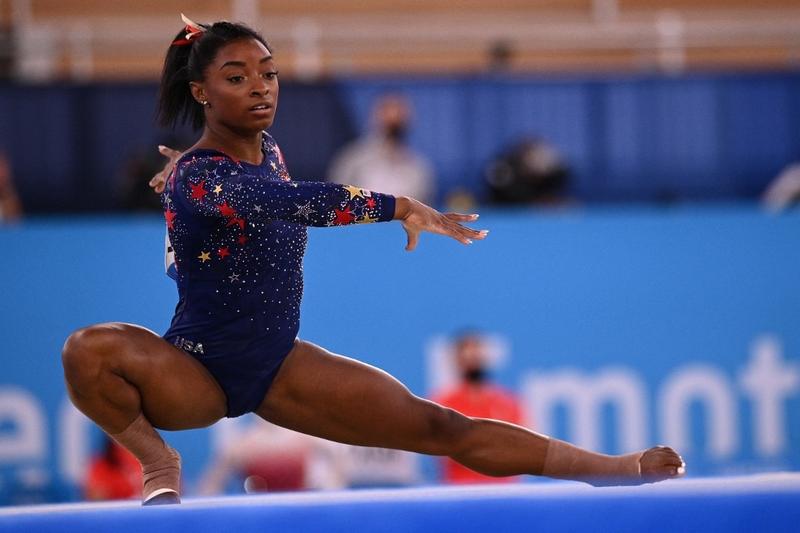 In this July 25, 2021 photo, USA's Simone Biles competes in the floor event of the artistic gymnastic women's qualification during the Tokyo 2020 Olympic Games at the Ariake Gymnastics Centre in Tokyo. (MARTIN BUREAU / AFP)

TOKYO - Three women dominated the focus at the Olympics on Monday - US gymnast Simone Biles, Belarus sprinter Krystsina Tsimanouskaya and New Zealand's Laurel Hubbard - as politics and personal issues played out at the Tokyo Games.

In athletics, Netherlands' Sifan Hassan unleashed her sizzling pace in the final lap to leave a gaping distance to the chasing pack and claim the women's 5,000 metres gold, kicking off her bid for an unprecedented Olympic treble.

Biles will compete in the balance beam competition, officials said on Monday, in what would be the superstar gymnast's last chance for gold in Tokyo after pulling out of other events citing mental health issues.

Biles shocked the world last week when she withdrew from several events, putting a focus on athletes' mental health and deepening the drama at a Games that have seen plenty of controversy.

Belarusian sprinter Krystsina Tsimanouskaya was granted a humanitarian visa by Poland after taking refuge in the Polish embassy in Tokyo. She had refused her team's orders to board a flight home early from the Games on Sunday.

Tsimanouskaya plans to leave for Poland in the coming days, a Polish deputy foreign minister, Marcin Przydacz, told Reuters. She is "safe and in good condition" after walking into the embassy on Monday morning, he said.

New Zealand's Laurel Hubbard made history on Monday by becoming the first openly transgender athlete to compete at an Olympic Games, but suffered disappointment with an early exit from the women's +87 kg final after failing to make three lifts.

USA Gymnastics said Biles will take part in the balance beam final and they were "excited" about the prospect.

The 24-year-old Biles, who won four golds at the 2016 Rio Games, dropped out of the all-around, floor exercise, vault and asymmetric bars finals in Tokyo.

The Games are taking place without spectators and under strict measures to prevent the spread of the pandemic, an unprecedented event in the history of the modern Olympics.

The Tokyo Olympics have already been hit by public opposition, as polls have shown that most Japanese people oppose holding the Games amid the worsening pandemic.

READ MORE: Olympics: Lee grabs all-around gold for US as Biles watches on

China has pulled ahead on the medals tally with 29 golds, followed by the United States with 22 and Japan on 17.

China's cycling team sprinters, Bao Shanju and Zhong Tianshi, broke their world record in the first round and although they were fractionally slower in the final, it was enough to beat Germany and retain the title.