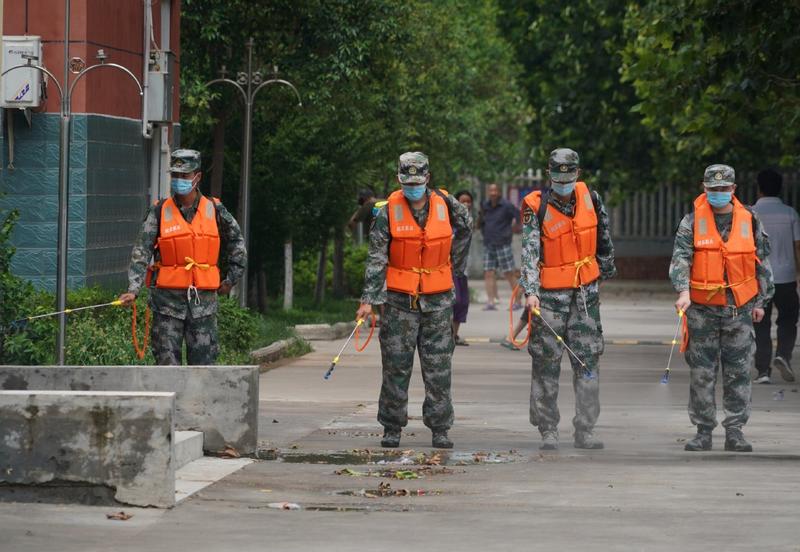 Rescuers disinfect a primary school in Weihui, Henan province, on July 28, 2021. The school is being used to accommodate people affected by the recent flooding in northern Henan. (PHOTO / XINHUA)

On Friday, a two-way lane opened and all cars entering the tunnel honked their horns and flashed their lights as a mark of respect for the dead.

As the deluge hit, water quickly filled the Jingguang Expressway tunnel, which consists of three sections. A total of 247 vehicles were submerged, and five men and one woman were killed, according to the Zhengzhou government.

The Zhengzhou's tunnel maintenance center said the downpour far exceeded the design capacity of not only the tunnel, but the entire city, to deal with heavy floods

Yang Junkui, a driver with a car-hailing service platform, said when he passed the tunnel at around 4 pm on July 20, water was pouring in "as swift as big waves".

As the water level rose quickly, the wheels of his car were lifted off the ground. He jumped out of the car and persuaded nearby motorists to abandon their vehicles.

"The water level went up so quickly that when some drivers realized the danger, they were unable to open their car doors," he was quoted as saying by China National Radio.

A total of 2,000 rescuers worked nonstop for five days to pump all the water, more than 600,000 cubic meters, out of the tunnel.

The tunnel is equipped with a drainage system, but it apparently failed to cope with such a huge flood. An essay published in 2013 by the Engineering Survey, Design & Research Institute of Zhengzhou said the northern section of the tunnel has an automatic drainage function. Two pump stations in the section start running automatically after water accumulates to "a certain level", the essay said

Ramps at the tunnel entrances were also specially designed to try to prevent floodwater from entering the area.

However, the Zhengzhou's tunnel maintenance center said the downpour far exceeded the design capacity of not only the tunnel, but the entire city, to deal with heavy floods.

Rainwater cascaded over expressway barriers, sharply increasing the water level in the tunnel, according to a Southern Metropolis Daily report.

"The scenario back then was the entire city was flooded … there was no more space to accept accumulated water in the tunnel," the report reads, quoting an unnamed city official. 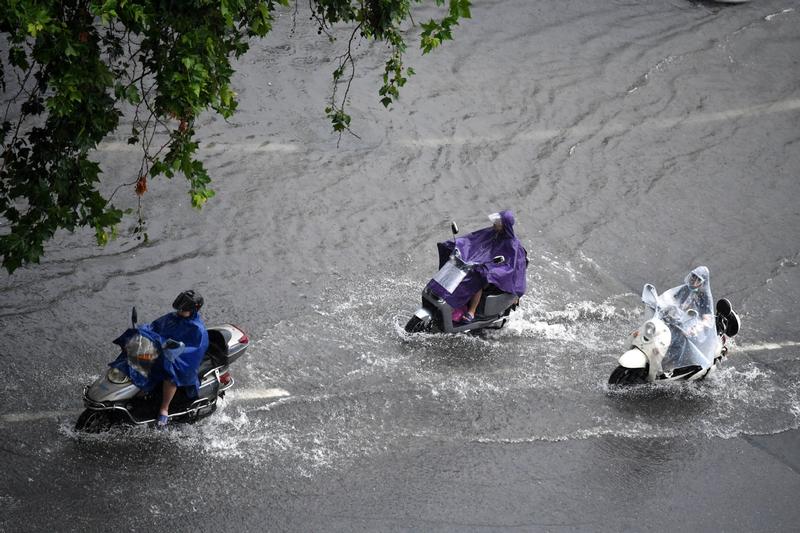 On July 26, at a videoconference in Beijing on fighting the floods and providing disaster relief, Premier Li Keqiang called for stronger early flood warnings. Contingency plans must be made to ensure public safety in subways and tunnels, Li said, adding that measures can be as harsh as necessary in order to avoid casualties.

In some southern cities that are hit more frequently by typhoons and rainstorms, local authorities have started building "smart tunnels" that can automatically initiate a water prevention process and shut tunnels automatically if the water reaches a certain level.

Guangzhou's Huangpu district, for example, has used such a system in 19 tunnels since July 2020.

With the help of electronic meters as well as ultrasound wave sensors, the system can monitor water levels in a tunnel in real-time, according to the local urban-rural development authority.

In some southern cities that are hit more frequently by typhoons and rainstorms, local authorities have started building "smart tunnels" that can automatically initiate a water prevention process and shut tunnels automatically if the water reaches a certain level

A water level of 10 centimeters triggers an emergency warning that involves flashing lights and the broadcast of a warning. If the water level in the tunnel reaches 27 cm, access is cut off and barrier gates close to stop water entering the tunnel.

However, he said early warning systems are important to avoid heavy casualties and economic losses caused by extreme weather.

Compared with relying on a drainage system, it's more important to quickly shut down underground transportation facilities and issue warnings to the public, Zhan said. Authorities should also be flexible on working hours and suspending classes at schools.

Qin Hu, senior director of research with the Environmental Defense Fund's China program, said both at home and abroad awareness of the consequences of severe weather is inadequate. This is one of the major factors for the vulnerability of urban areas in extreme weather events.

Both city managers and the general public don't have enough knowledge to realize how vulnerable they can be during extreme weather patterns, he said. This results in a lack of motivation to ramp up investment to enhance emergency responses.

In such areas, urban managers and the public should attach higher importance to early warning information and make necessary preparations, he said.

A multipronged response mechanism should be established among different government bodies, including public security, meteorological, emergency, transportation and urban infrastructure management, Qin said, so "they can provide support in a comprehensive manner when extreme weather events occur".