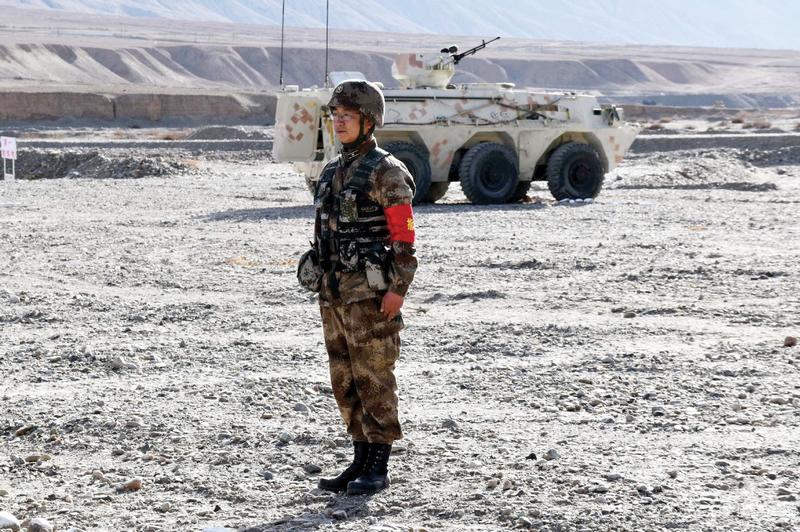 When Chen Hongjun was young, he often ‘stole’ his uncle’s army cap and put it on his own head, his mother recalls. Also, when one of his high school classmates was recruited by the military, Chen borrowed the uniform from the friend, wore it and had a picture taken of himself in the army clothing.

“He told me that one day, he would have his own uniform,” said the mother, Ding Nianbi.

After graduating with a major in psychology from Northwest Normal University in Lanzhou, Gansu province in 2009, Chen realized his life-long ambition by joining the military, taking up a posting in a People’s Liberation Army Ground Force unit at a border area in the Qinghai-Tibet Plateau.

When he was in his final year at university, Chen passed a police recruitment exam and had an opportunity to join the local SWAT team, but he decided to give it a miss.

Later, he saw a military draft notice on campus. Without any hesitation, he signed up for it because it offered him a chance to fulfill his dream.

After being recruited by the army, Chen called her mother and told her excitedly, “I can serve as an honorable soldier now.”

In the following years, Chen was assigned to different positions in the border defense regiment and had consistently performed well. His prowess led to him becoming the youngest commander in the infantry battalions under the regiment last year.

“No matter which position the Party put you in, you need to make contribution in that position” — these were some of the words in a book highlighted by Chen during his military years, referring to the Communist Party of China.

On June 5, 2020, Chen’s wife, Xiao Qianwen, had a chat with him via video call. She knew that her husband had always wanted a baby girl.

“Will you love our baby if it’s a boy?” Xiao, then pregnant, asked Chen.

The answer was a firm “yes”, but Chen, an officer who served in the military for more than a decade, unfortunately would never get to know if the couple was going to be blessed with a baby boy or girl.

A few weeks after that conversation with his wife, the then 33-year-old Chen died in a skirmish at the border with India.

The video call was, in fact, the last time that Chen and his wife saw or talked to each other. After that call, Chen could not be reached via his phone. “I called him over 80 times, but I could not get into contact with him anymore,” said Xiao.

Chen was only four months away from becoming a father and had promised his wife that upon retirement from the military, he would help her in raising their child, assist in household chores and would also go fishing with her, the PLA Daily, the military’s flagship newspaper, noted in a report.

Born in 1987, Chen grew up in a small town in Gansu, a landlocked province in northwestern China. He enrolled in university in 2005 and served as a psychological counseling volunteer during the Wenchuan earthquake in 2008, giving counseling to those who got injured or lost their loved ones in the disastrous event.

In the rural area where he lived, becoming a soldier or a university graduate is seen as an honorable accomplishment, and Chen had done both.

The remote region of Karakoram mountains, where Chen was stationed during military service, has an average altitude of over 5.5 kilometers, snowfall around the year and low-oxygen conditions.

Someone once said that lying still in Karakoram equals walking on the ground carrying a weight of almost 20 kilograms, and one’s heart beat can increase to 150 beats per minute there.

The harsh natural conditions mean hardship in defending the border, but Chen never complained or told his family about the tough conditions. He also lived a very thrifty life. After Chen died, his mom found the bedding he had used was soaked with sweat and his knitwear even had holes on it.

For nearly half a century, the border between China and India on the Karakoram mountains has been contested, and conflicts between both sides have occurred occasionally.

According to the PLA Daily, since April last year, “foreign troops” severely violated the previous agreement between the two militaries by crossing the borderline to build roads and bridges. They intentionally instigated problems and even attacked Chinese soldiers that were sent for communication, the newspaper said.

In June, tensions escalated as Indian soldiers crossed the Line of Actual Control at Galwan Valley, which the PLA saw as a violation of a bilateral agreement.

Following the rules and terms for border dispute management that had been agreed upon by both sides, Qi Fabao, a commander of the border defense regiment, led several soldiers to negotiate with the foreign troops and try to resolve the problem.

According to the PLA Daily, during the negotiation, Qi discovered that the Indian military, which had ignored Chinese soldiers’ efforts for a peaceful resolution, had hidden and deployed a large number of soldiers in the hope that the Chinese troops would be scared off due to sheer numbers.

Although Qi and his soldiers were outnumbered, they bravely defended themselves in the face of the Indian troops’ steel bars, clubs and rocks before Chen and his men rushed to protect Qi.

Qi was rescued, but as Chen led his men to a safer area, he saw several Chinese soldiers were besieged. Once again, Chen and his soldiers charged forward.

Within a short time, the Chinese soldiers expelled the foreign troops who “paid a heavy price”, leaving many injured, the PLA Daily said in a report.

The skirmish was short, but it cost Chen his life.

“Before we were ready to rescue those soldiers at the valley, Chen said he would lead us there and promised to take everybody back safely,” said Qu Yuanjun, one of the officers who participated in the rescue.

“However, he was unable to keep his promise that time,” he said, referring to Chen’s own tragic demise.

While his heroic deeds were a testament to his loyalty to the country, they also brought infinite grief to his family.

“He had bought a house close to his sister’s home for us. Perhaps he thought she would take care of us in case he left us one day,” said Ding, who is still struggling with her son’s death.

In a television interview, Xiao said among her husband’s belongings that were returned to her, she found his wallet, which contained a photo from their wedding.

Chen was buried in the martyrs’ cemetery in Lanzhou, capital of Gansu province. As the family headed to the cemetery, police officers led the way, with motorcycles flashing red and blue lights to pay tribute to the martyr.

During a later visit, Xiao stood with the family in front of Chen’s tombstone and held their baby boy, who was born four months after his father’s death.

Medal, as the Communist Party of China marked the 100th anniversary of its founding. The CPC Central Committee decided to award the medals for the first time this year to recognize outstanding contributions to the Party and the people amid the Party centenary.

Ding often holds her grandson in her arms and points to Chen’s picture on the wall, telling the child, “That is your father … He is a soldier of PLA ... You should treat him as a role model in future.”