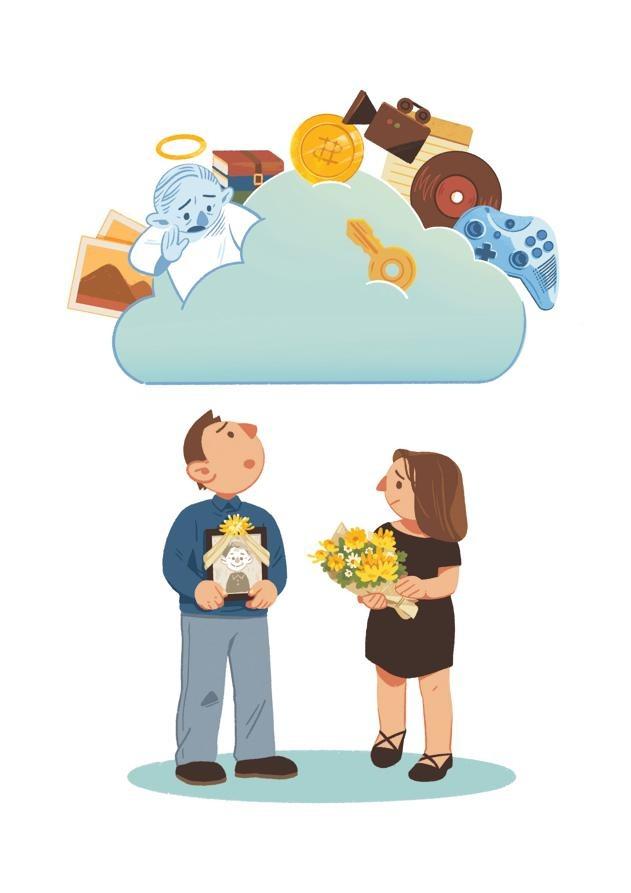 When Xiaoqi (pseudonym) lost his father at age 12, he didn't expect that one day he could find a connection to his deceased father in the virtual world.

Digital items with monetary value can be inherited, while for the ones with sentimental value, users should plan in advance, because in most cases, users have the right to use their accounts but operators have ownership of these accounts.

Before dying of stomach cancer in 2013, he was Xiaoqi's father in Ningbo, Zhejiang province, while in cyberspace, he was Green Arrow, a warrior in his favorite computer game World of Warcraft, even during his last bedridden days. The last time he logged in the game, Green Arrow reaching level 90 was standing in front of the Auction House for the Valley of Wisdom in Orgrimmar.

Three years after his father's death, Xiaoqi joined his father's guild, trying to find clues about his father's game account, and explore "the world his father once lived in, the road he took and the scenes he enjoyed".

"When I saw his back on the screen, it felt like he was there," Xiaoqi says.

On Blizzard's support portal, there are some inquiries like Xiaoqi's about how to claim the account of a dead relative. Users buy the license to use such content when they agree upon the company's terms and conditions to buy the games.

In May 2017, Blizzard was reported to have updated its policy which allows passing on the account of a deceased direct relative to the relevant user.

For Xiaoqi, his father's game account, although virtual, matters. In the internet age, many people encountered the question: How to inherit the digital legacy of a beloved one who passed away?

Almost everyone leaves their digital footprints, such as email, social media accounts, cloud-stored photos, books, videos and music, and even virtual currency. China had the largest number of internet users at 989 million, including 260 million aged 50 and above, by the end of 2020, according to the National Bureau of Statistics.

Infographics, A Day in Data, released in 2019 by London-based content marketing agency Raconteur shows how exponential the data created has grown over recent years, thanks to the popularity of the internet and mobile devices.

In the digital universe, every day about 5 billion searches are made and 294 billion emails are sent, according to the infographics. By 2025, it's estimated that 463 exabytes of data will be created each day globally, compared with last year's 2.5 exabytes. An exabyte equals 1 quintillion bytes, which means one with 18 zeros after.

How to deal with digital items when the last day comes－to pass on legal ownership to a beneficiary or to delete everything－has become an issue raising concern among users, companies and governments.

Some technology companies, from home and abroad, are trying to find a solution. During Apple's Worldwide Developers Conference in June, the US tech company announced that it will offer a digital legacy service for user accounts later this year. This will allow users to nominate people as "legacy contacts" who will be granted access to their Apple account in the event of their demise.

Shortly after Apple's announcement, Chinese tech company Tencent's patent relating to digital asset inheritance was released on Chinese corporate information data provider Tianyancha in early July. The 28-page patent was applied in March 2019, which states that a new technology would supply "information processing methods, and related devices in the inheritance and transfer of digital asset certificates".

In December, Chinese video-sharing and livestreaming platform Bilibili launched its "memorialized account" service to commemorate deceased uploaders, "who have shared this world with us, seen the same landscapes as us, and laughed or cried for the same reasons that we do," according to the company statement.

Bilibili's average monthly active users reached 223 million in the first quarter of the year. The platform allows family members to have an account set as memorial status after submitting supporting documents like the death certificate. Later the account will be frozen that no one can log on but the content will still be accessible as it was originally shared. The tipping feature will be deactivated.

"A memorial account is Bilibili's attempt in the field of digital inheritance," according to the company.

Before the memorial account feature, a 25-year-old woman who studied in the United States died of lung cancer on Dec 11. Her vlogs on Bilibili had attracted more than 183,000 followers. On Oct 6, a 41-year-old uploader from Shandong province died of cancer. In January, Bilibili set a 22-year-old uploader's account on memorial status, after the young man died of illness in his rented room in a remote county in Sichuan province. His death had gone viral and many people visited his homepage with condolences. Other than a previous 200 followers, the account now has nearly 2 million.

In September, Chinese microblogging platform Sina Weibo issued a statement on protecting accounts of dead users. Sina Weibo allows people to report that a user is deceased and provide documents for verification. Once the account is set as protected status, it cannot be logged on, and the content will remain but no change is permitted. Facebook and Instagram have provisions to memorialize deceased users.

Sui Li, who is in charge of Sina Weibo client service sector, told China National Radio that the movement highlights user privacy. If the posts were set invisible to others by the deceased users, the content will not be accessible to others.

According to China Will Registration Center, from 2017 to 2020, about 21 percent of the total 553 registrants born after 1990 have listed digital assets, including accounts for Alipay, WeChat, QQ and mobile games, in their wills.

The good news is that the Civil Code, which took effect on Jan 1, is catching up with technology. It states that "inheritance is the legal personal property left by a natural person upon death," which means data and virtual assets are under legal protection.

However, in practical implementation, lawyers and industry experts say challenges still exist in identifying the scope of digital legacy and to protect privacy.

"Digital items with monetary value can be inherited, while for the ones with sentimental value, users should plan in advance, because in most cases, users have the right to use their accounts but operators have ownership of these accounts," Zhao says.

According to Wang Cheng, a professor at Peking University Law School, inheritance has financial value.

"There is no doubt that valuable virtual coins and coupons can be inherited. But whether social media accounts, like WeChat and Sina Weibo, can be inherited is still questionable, because they are highly personal," Wang says.

He adds that social media accounts do not only involve the holders' opinions, but also their communication and interaction with others, which can be public or private.

"The inheritance of these accounts should consider the complicated issues, including privacy, portrait rights and confidential communication," Wang explains.

According to a survey conducted on Sina Weibo last year, 47 percent of respondents said they preferred to see their digital footprints deleted on death.

The popularity of the internet has made digital assets an issue as important as physical assets, posing questions to lawmakers everywhere. In 2014, Delaware became the first US state to enact a law that ensures families' rights to access digital assets of loved ones during incapacitation or after death.

According to European Union's Data Protection Regulation, which went into effect in 2018, individuals have the right to have personal data erased. It is also known as the "right to be forgotten".

However, many agree that there is still a long way to go in handling digital inheritance.