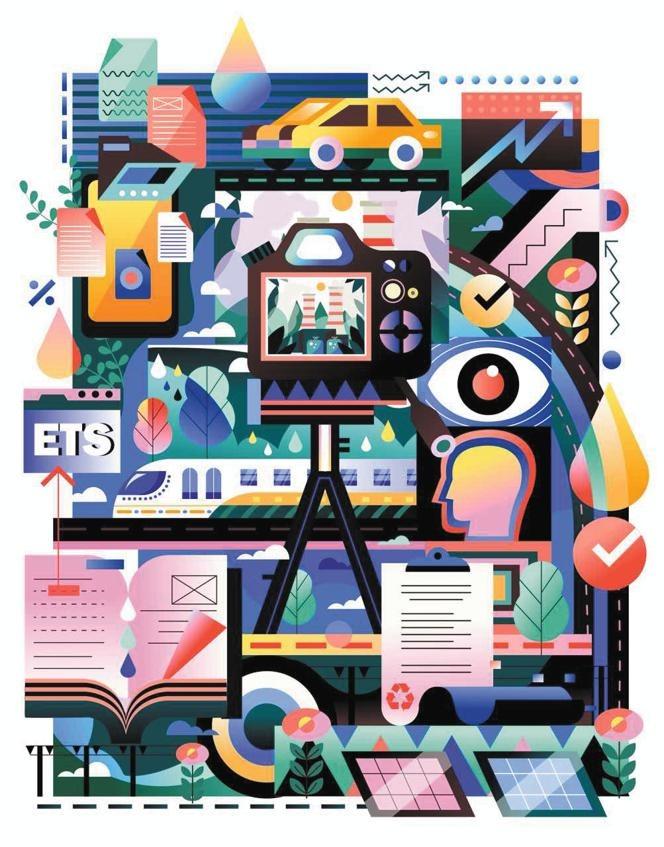 For many, the trading of carbon emissions credits to balance environmental and economic interests as we battle to curb global warming is a really cool idea. However, getting governments, not to mention business and society as a whole, to grapple with the complexity of such schemes can be fiendishly difficult.

One person who appreciates that better than most is Zeng Yingying, a young scholar who for 10 years has dedicated herself to researching climate issues and trying to put some of the ideas she has picked up into practice. There is enough disagreement about global warming and how to tackle it to depress anyone with the sunniest disposition, but Zeng remains quietly optimistic about the resolve of humankind to mitigate it.

China's national carbon emissions trading market opened on July 16, and Zeng says transparency, inclusiveness and openness will play an important role as the country's economy is gradually decarbonized over the next few decades.

Zeng, 30, associate professor of climate law and economics at Zhongnan University of Economics and Law in Wuhan, Hubei province, has devoted herself to the field since she was a university undergraduate.

That has included being an intern with the secretariat of the United Nations Framework Convention on Climate Change in Bonn, Germany, through for six months until March 2018 as she pursued a doctorate at the University of Groningen in the Netherlands.

In Bonn she served on the presidency team of the 23d Climate Change Conference of the Parties (COP 23) and later played a role in drafting rules, modalities and procedures of Article 6 of the Paris Agreement on climate change, which deals with an international carbon market mechanism.

The drafting of these implementation rules was considered the most contentious part of the Paris Agreement as Article 6 was being drawn up, and to this day participating parties have still to reach a full and final consensus. Negotiations on Article 6 will continue to be a key focus of the COP 26 meeting in Glasgow, Scotland, in November.

In Zeng's research, she has paid particular attention to the regulatory differences of emissions trading systems of China and the European Union, the two largest carbon markets, and has tried to work out not only why such linkage is essential, but more importantly how and when this can be done. The answer to the first question is relatively simple: It is likely to deliver profound economic, political and environmental benefits to the two parties.

Article 6 proposes to support voluntary international collaboration by trading credits for emissions reductions between governments that are working to implement their national climate plans known as nationally determined contributions (NDCs).

Hopes that this will happen sooner rather than later have risen since China announced that it is committed to reach peak carbon dioxide emissions before 2030 and realize carbon neutrality by 2060, which appeared in the Government Work Report－a firstin this year's two sessions in March.

"Carbon markets should be connected in one way or another," the former central bank governor Zhou Xiaochuan said during the International Finance Forum 2020 Annual Meeting in Shanghai in November. "Separated markets will lead to pricing problems and reckless speculation."

He proposed possibly linking carbon markets of China and Asian and European countries given the existence of Shanghai-Hong Kong Stock Connect, adding that the countries can work more closely together by, for example, setting up a special fund for carbon emissions reductions and clarifying the responsibilities to reduce emissions on trans-Eurasian transport routes.

It is rare for Chinese officials to raise such far-reaching proposals publicly, particularly given that the effectiveness of the national carbon market remains to be seen and the details of Article 6 are still pending.

Zhou, now vice chairman of the Boao Forum for Asia and head of the China Society for Finance and Banking, talked more about linking carbon markets recently, saying that with increasing public pressure for action on climate change, China should prepare well and endeavor to provide its wisdom for international negotiations.

There is a consensus that incomes from any kind of domestic carbon tax, carbon emissions credits trading or border adjustment tax should be used to reduce emissions, for example, to encourage activities applying new technologies and devices, he says.

As the EU is planning to impose border adjustment taxes on imports－mainly aluminum, steel, cement, fertilizer and electricity－from countries and regions with emissions limits regarded as lax. Zhou said the revenue should be reinvested to support climate actions of developing countries.

According to the UN Framework Convention on Climate Change, 18 industrialized countries said in 2015 that they would jointly mobilize an annual amount of 100 billion dollars by 2020 to address the needs of developing countries concerning mitigation actions and transparency on implementation, but that commitment has not been lived up to even once.

During the G7 Summit in Cornwall, England, last month the UN Secretary-General Antonio Guterres reiterated his call to fulfill for this pledge to be honored and for it to be clarified how the fund will materialize. All this is fundamental to building trust and will be important in ensuring that COP 26 is a success, he said.

The G7 countries－the US, the UK, Canada, France, Germany, Italy and Japan－reaffirmed in a joint communique after the summit that they could "jointly mobilize US$100 billion per year from public and private sources, through to 2025".

At the 12th Petersberg Climate Dialogue via video conference on May 8 China's Minister of Ecology and Environment Huang Runqiu also emphasized the importance of the negotiations to Article 6 and promoting full and effective implementation of the Paris Agreement.

He stressed that all developing countries have the right to use the fund and developed countries should provide sufficient, predictable and sustainable financial support in line with the principles of equity and common but differentiated responsibilities and respective capabilities.

One of the main obstacles is double counting that could diminish the effectiveness of climate actions and lead to a failure of overall mitigation in global emissions.

According to the second item of Article 6, countries selling carbon emissions credits should remove the amount from their NDCs, and those buying credits could add the amount to their NDCs.

For example, during COP 25 Brazil insisted that its forest carbon sinks including those from the Amazon rainforests should be added to its NDCs even as it sold the sinks to other countries, which zhishifenzi.com, a new media platform initiated by the renowned scientists Rao Yi, Lu Bai and Xie Yu, appears to regard as an instance of double counting.

However, deforestation spreading in Brazil and frequent wildfires, especially the catastrophic ones of 2019 and last year, may have cast a pall over the country's already cool attitude toward climate issues.

Many scientific essays have suggested that the world's rainforests may become carbon emitters rather than major carbon stocks within 20 or 30 years.

In April Brazil's environment ministry disclosed its position on the topic, declaring it would institute a voluntary carbon market that engages the private sector and aims to avoid double counting when regulations are adopted.

However, the technical note said "in view of the fundamental misconceptions referring to Article 6, any definition by the Brazilian government about an accounting system at this time would be inopportune".

Also at COP 25 the parties involved disputed whether and how to transfer carbon credits under the clean development mechanism in accordance with the Kyoto Protocol into the new market mechanism after 2020, which might pose a threat to climate goals being achieved.

Speaking of her experience several years ago with the UN Framework Convention on Climate Change, Zeng said: "I had been closely following the process academically but was still surprised by the vast differences in the parties' views and also different extents they deemed necessary to delve into the process."

China should join the process of making standards in both a topdown and bottom-up manner, and linking carbon markets is a good way to promote Chinese standards of carbon offset credits and raise technical and legal compatibility, she says.

As early as Zeng's third year of college she served on a legislative drafting team for the first local law in Shenzhen related to climate change.

Shenzhen, Beijing, Shanghai and four provincial-level administrations have been test models whose experience in legislation and other matters to do with climate change has been drawn on nationally since 2013.

The Ministry of Ecology and Environment says that by June the pilot markets had had turnover of more than 11 billion yuan ($1.7 billion), covering 3,000 companies in over 20 industries, and involving more than 480 million metric tons of carbon emissions.

And figures from the local markets show that Shenzhen accounts for 13.4 percent of trading volume and 12.92 percent of revenue with only 2.5 percent of market quota in the pilots programs.

In June the city published an exposure draft relating to new interim measures of carbon emissions trading, using the 2014 version as its foundation.

Zeng says the new draft provides a guideline for entities now covered by the national system regarding when and how to withdraw from the Shenzhen market.

In general, Zeng's research has given a glimpse into how complicated but beneficial it would be to link China and the EU, starting by analyzing different system designs and regulatory features of the two systems.

The EU emissions trading system, set up in 2005, is the most maturely operated greenhouse gas market in the world, and until the Chinese system opened a few weeks ago was the largest.

Quotas used to force countries to reduce their emissions have the effect of creating demand for carbon credits, thus driving up the market price, and so encouraging continuous and consistent carbon abatement is possible.

By July 28 the cumulative volume of carbon emission allowances in the national carbon market was 5.8 million tons and the cumulative turnover was 293 million yuan, with a ceiling price of 56.8 yuan a ton that day.

"The price in China's pilot programs is not enough to give an incentive for consistent abatement," Zeng says. "It's just like getting married: before you tie the knot you need to be mature and independent.

"Linkage will not be plain sailing. It all comes down to the political will to explore the benefits of linkage and to what extent incompatibility issues can be harmonized and risks mitigated, especially once the pandemic is gone.