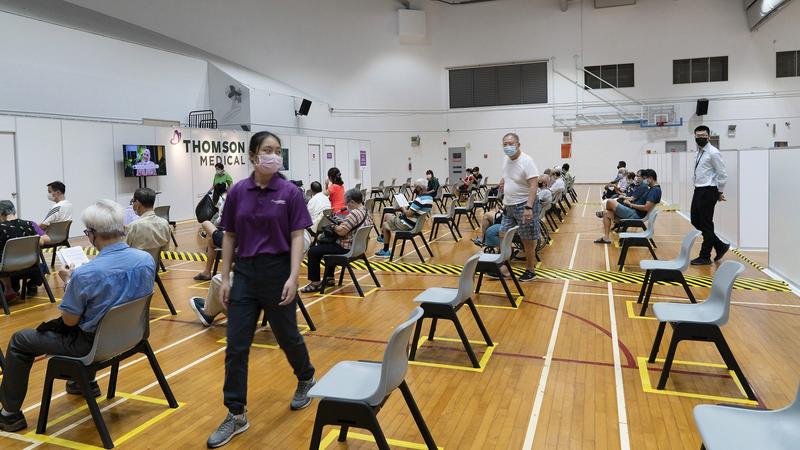 In this photo dated March 8, 2021, a health worker leads a senior citizen to an observation area after receiving the Pfizer-BioNTech COVID-19 vaccine at the Senja-Cashew Community Centre Vaccination Centre, operated by Thomson Medical, in Singapore. (PHOTO / BLOOMBERG)

Singapore is aiming for a feat no country has achieved so far: reopen to the world and emerge from the pandemic with a death toll still in the double digits.

While the US and UK have plowed headlong into reopening their economies, their failure to contain the virus early on resulted in hundreds of thousands of fatalities. Vaccine hesitancy is also providing a reality check for strategies that treated inoculation as the magic bullet.

At the other end of the spectrum, places like Australia and New Zealand managed to avoid the pathogen almost entirely, but slow progress with shots means they’re unable to lift the border controls and quarantines that keep them isolated.

Singapore is seeking to succeed at both. In a plan laid out by officials this week, the tiny city-state that relies on being globally connected is eyeing the resumption of some international travel by September.

To do that, it’s trying to snuff out an outbreak driven by the delta variant and reach a vaccination level - 80 percent - that few countries have achieved, but which the government says will put Singapore in a position where it can live with the virus without carnage.

We are determined to get to our destination of being a COVID-resilient Singapore ... But our journey must take into consideration public health realities. Sometimes, we may need to take a detour if we see hazards ahead. This way, we can ensure that we will get to our final destination safely, even though it may take a little longer.

Its leaders don’t have much of a choice. The country’s success at limiting the number of COVID-19 deaths to 37 came in part from efforts to seal off its population from the outside world for more than a year.

Other restrictions include limiting indoor dining, exercising, and social gatherings. The result is an island nation with cabin fever, desperate to venture beyond the 50 km it runs from east to west, and 27 km from north to south.

While the promise of easier travel for the vaccinated sparked jubilation in Singapore, the question remains if its leaders will actually take what will be a leap of faith for a nation where even one locally-transmitted COVID-19 case makes the front page.

They earlier pledged to begin easing restrictions once half the population was vaccinated; that milestone came and went on July 19.

Like other so-called COVID-19 Zero countries, which eliminated the virus with aggressive rules and border curbs,

Singapore has lower levels of natural immunity, which makes opening up borders that have kept the virus in check for so long a daunting proposition.

“At this stage, given the multitude of public statements on the vaccination coverage, the government has not really given themselves much room to maneuver,” said Nydia Ngiow, Singapore-based senior director at BowerGroupAsia, a strategic policy advisory firm. “They need to put their money where their mouth is and make the steps towards an endemic COVID-19 once we hit the 80 percent threshold, or risk being held accountable.”

Singapore’s hesitation in opening up, despite vaccination levels that would be the envy of much of the world, reflects the conundrum its traditionally cautious leaders find themselves in.

The rise of the delta variant and evidence that vaccinations may offer less protection against infection by new strains led officials to question the safety of their earlier plans.

“We are determined to get to our destination of being a COVID-resilient Singapore,” said Gan Kim Yong, the trade and industry minister who’s also co-chair of the pandemic taskforce. “But our journey must take into consideration public health realities. Sometimes, we may need to take a detour if we see hazards ahead. This way, we can ensure that we will get to our final destination safely, even though it may take a little longer.”

If Singapore pulls off its pivot, it’ll provide a template for COVID-19 Zero places that include Australia and New Zealand to rejoin the world. Yet it also risks becoming a cautionary tale.

While those leading the pandemic response say they expect to treat Covid as an endemic infection, much like influenza, the flu can infect a thousand people in Singapore every day during peak season.

It’s hard to imagine political and public health leaders that have shut down the country over a smaller number of often mild COVID-19 infections standing by if 1,000 people a day come down with COVID-19.

“Will there be deaths? Yes. Is there a threshold that will cause the government to waver? There should be one if the government is sensible,” said Jeremy Lim, associate professor at the Saw Swee Hock School of Public Health at the National University of Singapore. 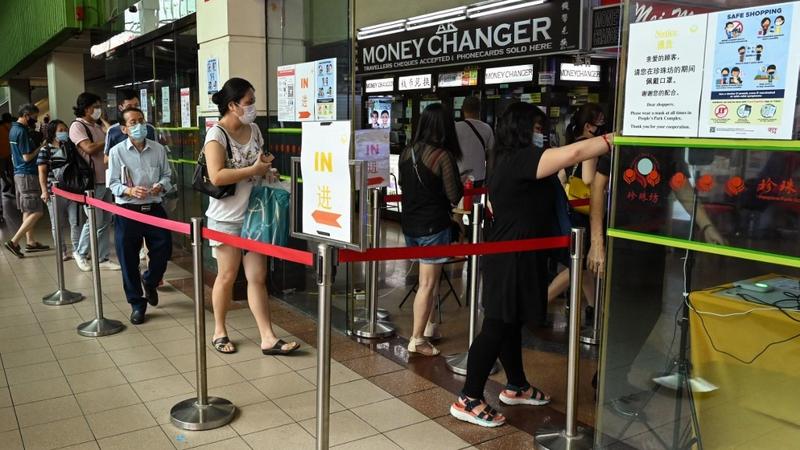 People queue as they wait to use a check-in service, which aids the process of contact tracing for COVID-19 cases, to enter a shopping centre in Chinatown district in Singapore on July 7, 2021. (ROSLAN RAHMAN / AFP)

If new variants of concern emerge, particularly any that are more dangerous than the delta strain, or if hospitalizations and deaths far exceed anticipated numbers, then dialing back the reopening plan “would not only be technically correct, but also morally an imperative,” he said.

Singapore’s stance positions it to be one of the first countries to test the theories that epidemiologists and virologists crafted when COVID-19 first emerged.

Many predicted that herd immunity - a widespread level of protection that essentially means that the virus does not have enough vulnerable people left to infect and therefore can’t take hold in a community - would exist in areas where more than 70 percent of the population has been vaccinated.

Singapore’s leaders have said they aren’t aiming for herd immunity, which may require even higher levels of vaccination. Instead, they expect the virus to circulate at low levels in the community, a so-called endemic state, that will allow them to live with it

While flattening the curve and getting to herd immunity via vaccination was a goal of many nations, Singapore may show whether it’s attainable.

Others, including the Maldives, the United Arab Emirates and Malta, are also flirting with the 80 percent vaccination rate that Singapore has targeted, though they suffered broader outbreaks that provide some natural immunity.

“No country has demonstrated that it has sufficiently high levels of immunization so that the virus cannot replicate enough to survive in the community in circulation,” said Harvey Fineberg, a former dean of the Harvard School of Public Health and ex-president of the US National Academy of Medicine. “The more transmissible the virus becomes, the harder it is to achieve that level of community protection, because the highly transmissible virus is better able to find someone that it can infect and then infect yet another.”

Singapore’s leaders have said they aren’t aiming for herd immunity, which may require even higher levels of vaccination.

Instead, they expect the virus to circulate at low levels in the community, a so-called endemic state, that will allow them to live with it.

“Ours will be a controlled opening,” Health Minister Ong Ye Kung told Parliament on July 26. “We are not going to do a big bang – and then predictably blow up!”

The point of regret and reversal could come faster than expected, as the most recent spate of infections show how gun-shy the Singapore government can be.

A series of linked clusters found at a fishery port and karaoke lounges resulted in local cases reaching a record high.

The outbreaks were an opportunity for Singapore to move beyond its “COVID Zero” approach. A new normal with endemic infections would require the city-state to accept a rising number of daily cases, as long as few people ended up in the hospital and the health care system wasn’t stretched. Though daily cases rose into the triple digits, two unvaccinated patients were in critical condition.

But Singapore blinked. Instead of sticking with its reopening plan, the rising number of cases that had spread into wet markets frequented by locals, particularly the elderly, prompted the government to re-impose restrictions lifted just four days earlier, such as banning dining-in.

For now, government leaders say they’re unlikely to stray from the course again after the current clusters come under control. Among average citizens, there’s growing frustration over the slow walk.

READ MORE: Singapore offers a blueprint for restaurants back in lockdown

National Day celebrations on Aug 9, which would have been a triumphant marker of reopening before they were postponed for two weeks after the new flareups, have become a bugbear for those anxious to see real progress toward normalcy.

“The intention to hold the event is maybe to rally the country and show resilience,” said Deborah Rosabel Devaraj, a marketing executive. “Maybe a better way to show resilience is to move forward with reopening and live with the virus.”