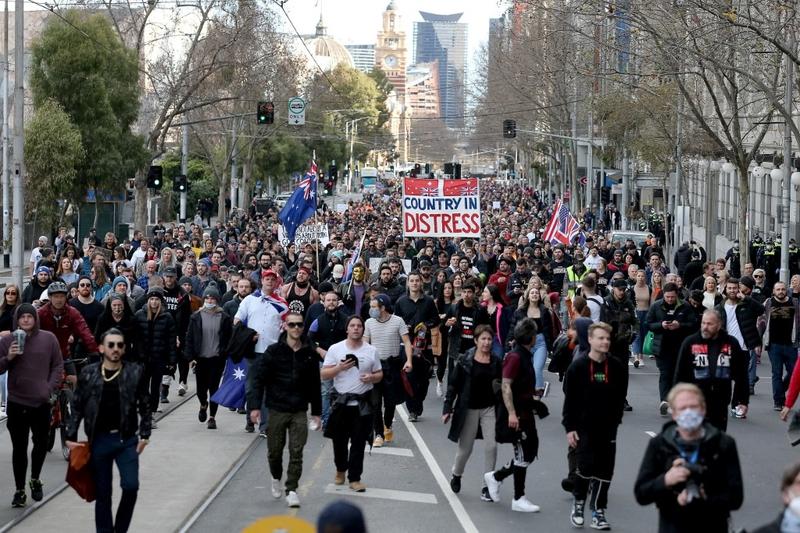 Protesters take part in a rally in Melbourne on July 24, 2021, as scores of anti-lockdown and anti-vaccination activists gathered to demonstrate in Australia's two largest cities. (CON CHRONIS / AFP)

Some demonstrators in Sydney were seen hurling bottles and plants - torn from the sidewalk - at police officers, while others chanted “Freedom, freedom” as they marched along Broadway in the city’s central business district. A major rally also took place in Melbourne and other protests were being held nationwide.

More than 50 people were charged with offenses in Sydney, David Elliott, police and emergency services minister for New South Wales, told reporters. “What we saw today were 3,500 very selfish boofheads,” he said, using local slang for fools. “These are the sort of people who are going to prolong this lockdown.”

Millions of Australians, including in Sydney and Melbourne, are currently under lockdown measures as the country grapples with the highly-contagious delta variant and a slow rate of inoculations. Australia has administered enough doses for just 21 percent of its population, according to the Bloomberg Vaccine Tracker, compared with 53 percent in the US and 62 percent in the UK.

Australia had last month recommended that only people aged 60 and above should use the AstraZeneca vaccine, which has been linked to rare blood clots.

New South Wales reported 163 new cases in the community Saturday, and confirmed the death of a man aged in his 80s in southwest Sydney on Friday. Infections have reached 1,940 cases since the outbreak began in mid-June.

Australia plans to set new vaccination targets that would allow the country to respond to future COVID-19 outbreaks without the need for lockdowns, according to Prime Minister Scott Morrison.

The government will set the targets in coming weeks, Morrison said in a speech Saturday. When Australia moves to a second stage of its vaccination program, lockdowns would occur only “in extreme circumstances,” and would not be implemented at all once the nation progress to a third stage, he said.

AstraZeneca Plc is planning to import COVID-19 vaccines to Southeast Asia as its only manufacturing facility in the region struggles to ramp up output to meet demand from countries hit hard by the delta variant.

The Anglo-Swedish drugmaker is scouring more than 20 supply chains in its global manufacturing network to find additional vaccines for Southeast Asia, including Thailand, James Teague, managing director for AstraZeneca Thailand, said in an open letter Saturday. The company “will leave no stone unturned” in manufacturing vaccines as fast as possible, he said.

“A global supply crunch for COVID-19 vaccines and shortages of the materials and components required to produce the vaccine, make it difficult to provide certainty today, but we are hopeful of importing additional doses in the months ahead,” Teague said.

Southeast Asia is reeling from a resurgent COVID-19 outbreak with the emergence of the more infectious delta variant, with Thailand and Indonesia setting record for new cases and deaths in recent weeks. Thailand reported 14,260 new cases and 119 fatalities Saturday, with more than 90 percent of the nation’s total infections coming during the third wave of the outbreak that began in early April.

AstraZeneca’s inability to scale up production has contributed to the slow vaccination rate in countries including Thailand, the Philippines and Vietnam, which are in line to receive shots made by its Thai partner Siam Bioscience Plc. Thailand has said it’s in talks to procure additional vaccines from companies including China’s Sinovac Biotech Ltd to fill the supply gap.

Cambodia on Saturday confirmed 860 new COVID-19 infections including 395 imported cases, pushing the national total caseload to 72,104, the Ministry of Health (MoH) said in a statement.

Thirty-two more fatalities had been recorded, taking the overall death toll to 1,254, the ministry said, adding that 1,074 other patients had recovered, bringing the total number of recoveries to 64,548.

India's COVID-19 tally rose to 31,332,159 on Saturday as 39,097 new cases were registered during the past 24 hours across the country, showed the federal health ministry's latest data.

Besides, 546 deaths due to the pandemic since Friday morning took the death toll to 420,016. 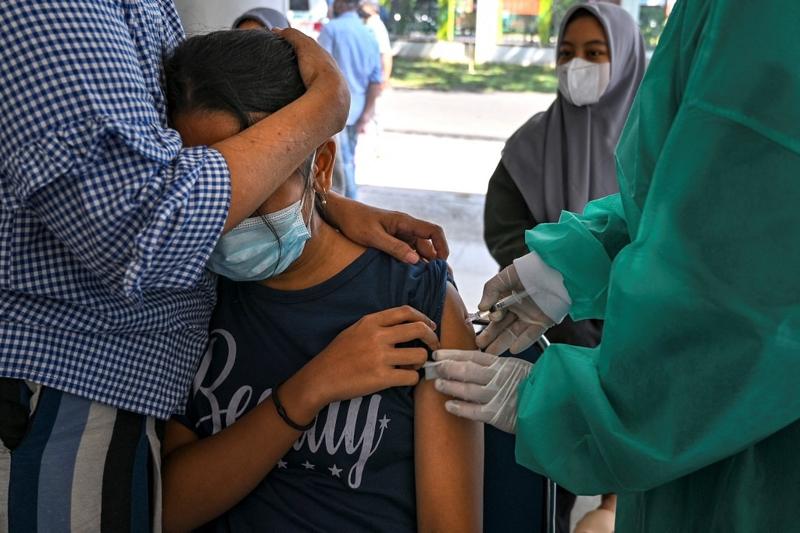 A girl (center) is comforted while receiving a dose of the Sinovac COVID-19 vaccine at a vaccination centre in Banda Aceh on July 24, 2021. (CHAIDEER MAHYUDDIN / AFP)

The Indonesian island of Bali is running out of oxygen for its COVID-19 patients as infections surge, the chief of its health agency said, as Southeast Asia’s biggest country struggles with the region’s worst COVID epidemic.

Bali, famous for its tourist beaches and temples, along with the main island of Java and 15 other regions are under tight coronavirus restrictions, due to expire on Sunday. The government is debating whether to extend them or not.

The COVID-19 mortality rate is lower among fully inoculated residents of Jakarta, where almost 70 percent of the population has received at least one vaccine dose, the government said.

In a study conducted Jan 12-July 9, almost 17,000 out of a total of 5.16 million people under observation got infected despite receiving at least their first jab, the Information Ministry said on Twitter late Friday. Of the approximately 15,000 who had received just one shot, about 50 people died. Among almost 2,000 fully vaccinated people who got infected, only four died from the disease, showing a case fatality rate of 0.21 percent.

“Vaccines are effective in bringing down fatality rates,” the ministry said. “The assessment also shows that vaccinated population has smaller chance of getting infected.”

The study compares with health ministry data that showed the weekly COVID-19 death rate in the city of 10 million people fell to 0.61 percent in the second week of July from 0.96 percent a month earlier, and 2.78 percent in mid-May. Indonesia is mostly using vaccines made by China’s Sinovac Biotech Ltd.

The pandemic has so far claimed 88,273 lives in Iran, up by 210 in the past 24 hours, the Iranian Ministry of Health and Medical Education said in a briefing published on the ministry's official website. 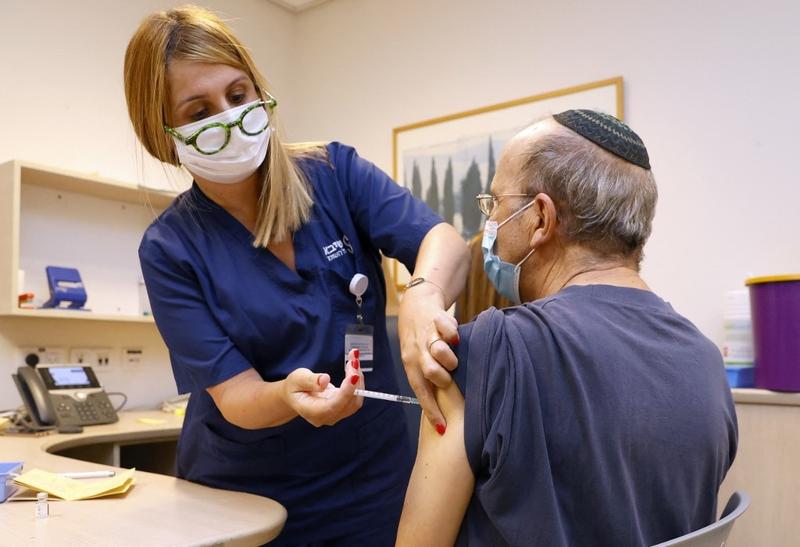 A man receives a third dose of the Pfizer-BioNTech COVID-19 coronavirus vaccine at the outpatient clinics of the Cardiovascular Centre at Sheba Medical Center near Tel Aviv, Israel, on July 12, 2021. (JACK GUEZ / AFP)

The number of active COVID-19 cases in Israel rose to 10,166, the highest since March 27, the ministry said.

The death toll from the virus in Israel remained unchanged at 6,457. The total recoveries from the disease climbed to 841,354 after 726 newly recovered cases were added.

Infections have been on the rise in recent weeks, reaching 1,979 on Thursday, the highest since January.

The number tends to be lower on holidays and weekends due to less testing.

Laos reported another record high of 278 new cases of COVID-19 on Saturday, surpassing the previous record of 256 cases registered on Thursday, according to the Lao Ministry of Health.

The National Taskforce Committee for COVID-19 Prevention and Control reported 278 new imported cases and no locally transmitted cases, Deputy Director General of the Department of Communicable Diseases Control under the Lao Ministry of Health Phonepaserd Sayamoungkhoun told a press conference in Lao capital Vientiane on Saturday.

Phonepaserd said that the imported cases were detected among returning workers from neighboring countries.

Mongolia's COVID-19 tally rose to 155,224 after 1,442 more locally transmitted cases were recorded over the past 24 hours, the country's health ministry said Saturday.

Meanwhile, six deaths were reported in the past day, bringing the national tally to 794, the ministry said in a statement.

New Zealand reported three new cases of COVID-19, said the Ministry of Health in a statement on Saturday.

The number of active cases of COVID-19 in New Zealand was 75 and the total number of confirmed cases in the country reached 2,504, it said.

Pakistan added 1,841 new COVID-19 cases over the past 24 hours, the National Command and Operation Center (NCOC) said on Saturday.

The NCOC, a department leading Pakistan's campaign against the pandemic, said that the country's number of overall cases rose to 1,001,875 amid concerns of the fourth wave.

According to a statement by the NCOC, the country's southern Sindh province has been the worst hit, with a total of 363,101 confirmed cases, followed by east Punjab province where the disease was detected in 352,153 people.

A total of 22,971 people died of the disease, including 32 patients who died over the last 24 hours, the NCOC said, adding that 2,551 are in critical condition.

Some of Singapore’s top chefs are fed up with the government’s on-again, off-again measures to stop the spread of Covid-19, which include a temporary shutdown of in-person dining.

Faced with a surge of cases from clusters related to karaoke lounges and a fishery port, authorities announced tighter controls, including a prohibition on eating in restaurants until Aug 18. That ban took effect Thursday - just a month after dining-in had been re-allowed - dealing another blow to an industry that has struggled for more than a year to navigate changing rules, policies that eat into revenue and tight scrutiny.

Singapore's Ministry of Health (MOH) reported 133 new COVID-19 cases on Friday, bringing the total tally in the country to 63,924.

The new infections included 130 locally transmitted cases, of which 78 were linked to the Jurong Fishery Port cluster and six belonged to the KTV cluster.

South Korea passed its sixth extra budget of the pandemic, seeking to shore up the economy as the country’s worst virus wave so far shows little sign of abating. The 34.9 trillion-won (US$30.3 billion) spending plan approved by lawmakers early Saturday includes a 250,000-won cash handout for most people, blunting the economic damage from a semi-lockdown affecting half the population.

The Philippines' Department of Health (DOH) reported on Saturday 6,216 new COVID-19 infections, bringing the total number of confirmed cases in the Southeast Asian country to 1,543,281.

The DOH said the death toll climbed to 27,131 after 241 more patients died from the viral disease.

The DOH reported Saturday that it had detected additional 17 new Delta variant cases, raising the country's tally to 64.

A healthcare worker administers a dose of COVID-19 vaccine to a man at Kizilay Square in Ankara, on July 11, 2021. (ADEM ALTAN / AFP)

Turkey's daily COVID-19 cases jumped to 11,094 on Friday, the highest count since May.

"We should turn from flexibility to strict precautions and have our first doses of vaccine immediately," Turkish Health Minister Fahrettin Koca tweeted on Friday.

Turkey lifted its restrictions on July 1 and has seen a rapid surge of infections in the past week.

Turkey has started mass vaccination against COVID-19 on Jan. 14 after the authorities approved the emergency use of the Chinese Sinovac vaccine.

More than 39.26 million people have received their first doses of the vaccine, while over 22.05 million have taken their second doses. Turkey has so far administered over 65.05 million doses including third booster jabs. 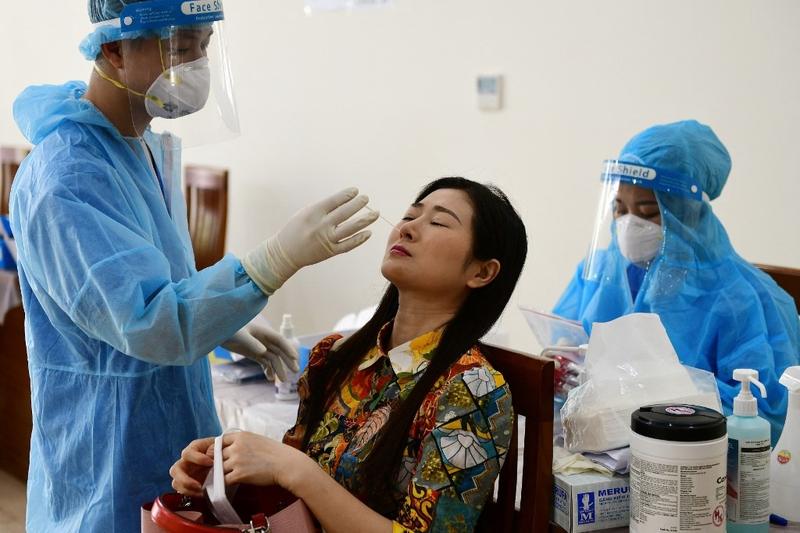 Health workers collect a swab sample from a member of the media during COVID-19 coronavirus testing in Hanoi on July 12, 2021, ahead of the upcoming 15th National Assembly meetings. (NHAC NGUYEN / AFP)

Hanoi's municipal authorities released a circular on the issue Friday night, saying that the social distancing would go in line with Directive 16 of the Vietnamese Prime Minister Pham Minh Chinh, and would last for 15 days.

According to the directive, residents must stay at home and only go out for basic necessities such as buying food or medicines, or to work at factories or businesses that are still allowed to open.

As of 6 am local time Saturday, Hanoi had recorded 884 COVID-19 infections since the start of the latest outbreak in Vietnam in late April. Almost half of those were detected since early July when local cases were registered again in the city after it went through nine days without any, according to local media VnExpress.