Russia has been in the grip of a surge in cases that authorities blame on the more contagious Delta variant.

The coronavirus task force confirmed 23,947 new COVID-19 infections across the country in the last 24 hours, down around 5 percent on the previous week. In Moscow, 3,376 new cases were reported, down 26 percent.

Russia’s Ministry of Labor, together with the public health regulator Rospotrebnadzor, recommended that employers be allowed to suspend employees without pay for refusing to get vaccinated, except for medical reasons. The recommendations say an employer can allow an unvaccinated employee to work remotely. They also clarify that herd immunity at a company means that 80 percent of employees either have been vaccinated or had COVID-19.

Efforts must be reinforced to prevent the transmission of the Delta variant of coronavirus as it has become the most dominant strain across much of Europe, top health authorities in Europe warned on Friday.

The SARS-COV-2 Delta variant is moving fast across Europe based on surveillance data collected between June 28 and July 11, the World Health Organization's (WHO) Regional Office in Europe and the European Centre for Disease Prevention and Control (ECDC) said in a joint statement.

"Based on current trends, the Delta variant will be the globally dominant strain over the coming months and has already been identified in almost all European countries. It will continue to spread, displacing the circulation of other variants unless a new, more competitive virus emerges," the statement said.

"We are seeing a significant rise in cases associated with the spread of the highly transmissible Delta variant," Hans Kluge, regional director of WHO Europe, said in the statement.

He warned that despite tremendous efforts by states to vaccinate people, millions more remain unvaccinated and therefore at risk of ending up in hospital.

The WHO official reiterated that receiving a full vaccination series significantly reduces the risk of severe disease and death. "When called to do so, people should get vaccinated."

Both organizations noted that intensive implementation of the current public health measures, including increased access to testing, will be required to control COVID-19 transmission, particularly while the progress of vaccination is still not sufficiently high in many countries.

The number of confirmed COVID-19 cases in Africa reached 6,380,914 as of Friday afternoon, the Africa Centers for Disease Control and Prevention (Africa CDC) said.

The Africa CDC, the specialized healthcare agency of the African Union, said the death toll from the pandemic stands at 161,772 while 5,589,196 patients across the continent have recovered from the disease.

South Africa, Morocco, Tunisia, Egypt and Ethiopia are the countries with the most cases in the continent, according to the Africa CDC.

Brazil reported 108,732 cases of COVID-19 in the last 24 hours, double the amount from the previous day and the second-highest number of daily infections since the pandemic started, according to Health Ministry data. The government attributed the sharp rise in daily infections to delayed notification of 63,000 cases from Rio Grande do Sul state.

Latin America’s largest country confirmed 135 cases of infection by the delta variant as of July 22, including 87 in Rio de Janeiro, the Health Ministry said.

Canada reported an average of 448 new COVID-19 cases daily on July 16-22, up 13 percent over the previous week, the Public Health Agency of Canada (PHAC) said Friday.

Ontario, the most populous province with 14 million people, confirmed 192 new cases of the novel coronavirus on Friday, which came after 85 new infections on Thursday. Before that, the province reported case numbers below the 150 mark for three days.

Ontario's rolling seven-day average now stands at 160, up from 151 at this point last week.

Chilean authorities said on Friday that China’s Sinovac had begun evaluating potential sites for the construction of a vaccine plant in Chile that could begin producing doses of the Chinese shot as early as the first half of 2022.

Chile, a global leader in vaccinating its citizens against the coronavirus, has leaned heavily on the Sinovac vaccine in its fast-paced mass vaccination program. The Andean nation also helped spearhead clinical trials of the shot late last year. A delegation of executives from Sinovac this week visited potential sites for the factory near the capital Santiago and in Chile’s northern desert.

In a statement, the official added that 83 more deaths were also recorded, bringing the total to 34,875. 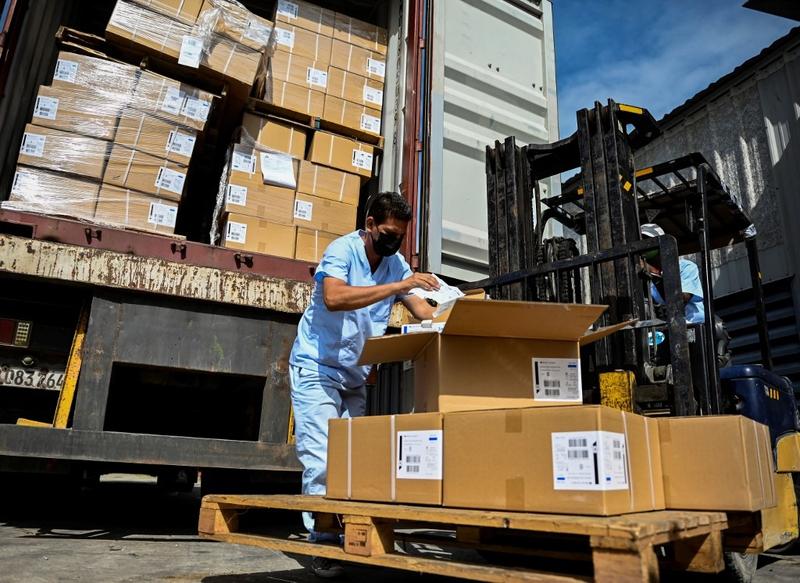 Workers of Cuban organization of biotechnology and pharmaceutical industries BioCubaFarma's Marketing and Distributor Company of Medicines (EMCOMED) unload a donation of 1,6 million syringes sent by Cuban solidarity groups based in the United States for the vaccination campaign against COVID-19, in Havana, on July 23, 2021. (YAMIL LAGE / AFP)

It also announced 66 more deaths, bringing the death toll to 2,203.

The ministry's national director of hygiene and epidemiology Francisco Duran called on the population to reinforce health measures.

The province of Matanzas remains the epicenter of the pandemic in Cuba, reporting 1,603 cases in the last day, followed by Havana (1,357) and Ciego de Avila (969), which has one of the highest presence of the Delta variant of the novel coronavirus on the island.

According to the GHS, the West African country's total cases stood at 100,250 with 819 related deaths. 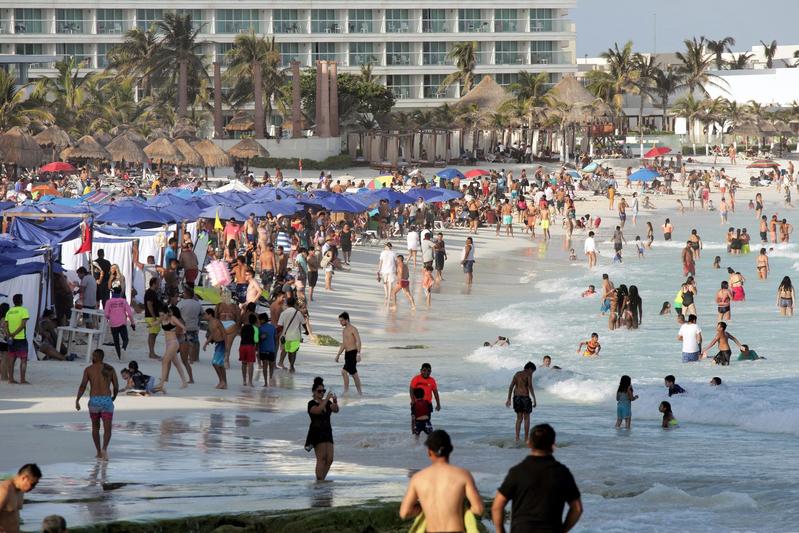 A third coronavirus wave fueled by the highly contagious delta variant is battering two of Mexico’s most popular tourist destinations on opposite coasts, Los Cabos in the Pacific and Cancun on the Caribbean.

In Cancun, cases have soared to a point where the Hard Rock hotel has set aside two floors for guests with symptoms. Some hotels say they offer discounts for those in quarantine until they’re no longer contagious.

In Baja California Sur, where Los Cabos is located, authorities are again rushing to add beds to strained hospitals, which reached 75 percent capacity last week before improving to 62 percent on Thursday. Beaches in the town of La Paz were ordered closed, though local media show many ignoring the order.

Since Mexico hasn’t limited who can fly during the pandemic, both domestic and international tourists have flocked to the resort areas. In June, 557,400 passengers landed in Los Cabos, a 15 percent jump from June 2019. Cancun received just over 2 million, slightly below pre-pandemic levels but far more than the 175,000 visitors last year.

“The delta variant has a strong presence in the Yucatan peninsula, particularly Quintana Roo and in Baja California Sur, where around 80 percent of new tests are now delta,” said Alejandro Macias, who oversaw Mexico’s H1N1 epidemic in 2009.

The country's death toll rose by 19 to 9,536, while 559 people are in intensive care units, said a statement by the Ministry of Health.

Vaccination against COVID-19 has prevented about 700 deaths since May 2021 in Portugal, according to study results released by the Public Health Institute of the University of Porto (ISPUP) on Friday.

According to the study, the main factor for the decrease in deaths is that vaccination protected a significant portion of the population most vulnerable to the pandemic, especially the elderly.

At least 29 people died in the third wave of the COVID-19 pandemic in Tanzania and 176 new cases were recorded in a single day, a senior official said Friday.

Tunisia recorded 317 coronavirus-related deaths in the last 24 hours, a daily record since the start of the pandemic, the health ministry said on Saturday.

The ministry also reported 5,624 new cases, increasing concerns about the country’s ability to fight the pandemic, with intensive care units in hospitals completely full and a lack of oxygen supplies. The vaccination campaign is moving slowly.

The World Health Organization (WHO) says the daily COVID-19 death tally in Tunisia is now the highest in Africa and in the Arab world. 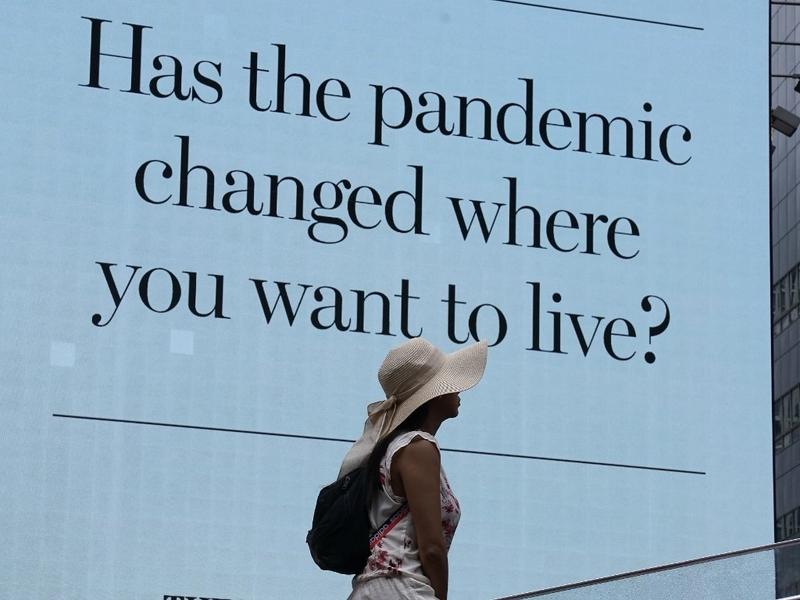 A person passes a billboard in Times Square on July 22, 2021, as the Delta COVID-19 surge is renewing calls for mask mandates in New York. (TIMOTHY A CLARY / AFP)

The Los Angeles County Department of Public Health said in a release that it was the third day in a row with more than 2,500 daily cases reported. Over the last four days, more than 10,000 cases were reported in the most populous county in the United States, home to over 10 million residents.

Pfizer Inc and German partner BioNTech said on Friday the US government has purchased 200 million additional doses of their COVID-19 vaccine to help with pediatric vaccination as well as possible booster shots - if they are needed.

A Biden administration official with knowledge of the contract said that as part of the agreement, Pfizer will provide the United States with 65 million doses intended for children under 12, including doses available immediately after the vaccine is authorized for that age group.

The US government also has the option to buy an updated version of the vaccine targeting new variants of the virus.

The deal comes as the Delta variant of the coronavirus sweeps across the country and drives up infections, contributing to the debate over whether or not Americans will need a booster dose this fall.

The purchase brings the total number of doses of the Pfizer/BioNTech vaccine to be supplied to the United States to 500 million, of which roughly 208 million doses have already been delivered, as of Thursday’s data from the government.