China refutes US accusations on next stage of virus origin tracing 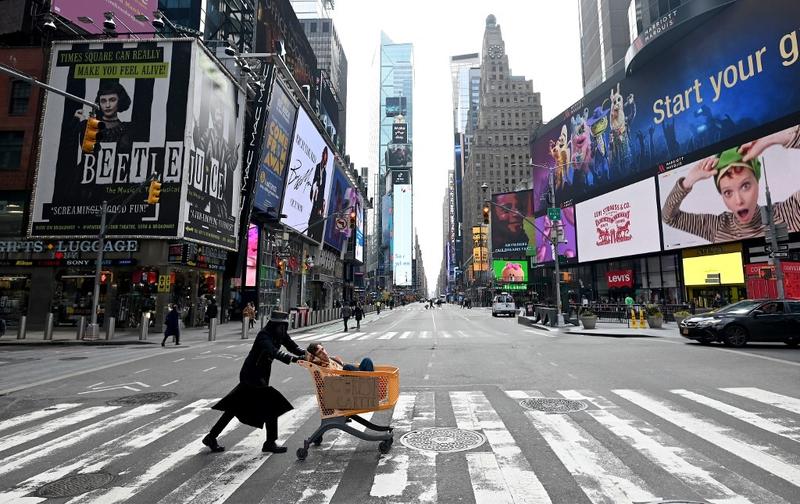 In this file photo taken on March 17, 2020, a man with a mask pushes a cart with a sign reading "corpse cartte" at Times Square in Manhattan in New York City. (JOHANNES EISELE / AFP)

BEIJING - China on Friday refuted accusations from the United States that China's stance on the next stage of the global origin-tracing issue was "irresponsible and dangerous".

In a daily news briefing, Foreign Ministry spokesperson Zhao Lijian said that the US side has been extremely irresponsible and shameful in its behavior toward its own people and the international community.

READ MORE: Chinese diplomat rebukes US for covering up experiments

Zhao made the remarks when asked to comment on the "deep disappointment" expressed by the White House concerning China's stance on the next stage of global origin tracing.

Zhao said that some people in the United States have continued to slander and smear China, using the epidemic as an excuse, totally disregarding common sense and taking an arrogant approach to science.

The United States has never responded to reports that early COVID-19 cases in the United States may be earlier than the first case currently reported. It is also turning a blind eye to concerns by the international community regarding the US military facility Fort Detrick and 200 plus US overseas biological laboratories, said spokesperson Zhao Lijian

"China resolutely says no to this," said Zhao.

He said that, not only did China take the lead in controlling the domestic epidemic, but it has also offered over 300 billion masks, 3.7 billion protective suits, 4.8 billion test kits and large quantities of other epidemic-prevention materials to more than 200 countries and regions around the world. China has also provided more than 600 million doses of vaccines and has continuously made important contributions to the global fight against the epidemic.

China has always maintained an open and transparent attitude on the origin-tracing issue and has invited WHO experts to China twice. The expert group visited all the places they wanted and met everyone they wanted, said Zhao.

"China's fight against the epidemic can withstand the test of history and the people. However, it is the actions of the United States that have deeply disappointed the international community and its own people," said the spokesperson.

The United States has never responded to reports that early COVID-19 cases in the United States may be earlier than the first case currently reported. It is also turning a blind eye to concerns by the international community regarding the US military facility Fort Detrick and 200 plus US overseas biological laboratories, said Zhao, adding that this is the most dangerous attitude.

Zhao said that viruses are the common enemy of mankind, and origin-tracing is an important and complex scientific issue that needs the cooperation of scientists from all over the world, as well as the joint efforts and cooperation of the governments and people of all countries.

He stressed that stigmatizing other countries using the epidemic and politicizing the origin-tracing issue will only provoke strong dissatisfaction and resolute opposition from the international community, and will never succeed.