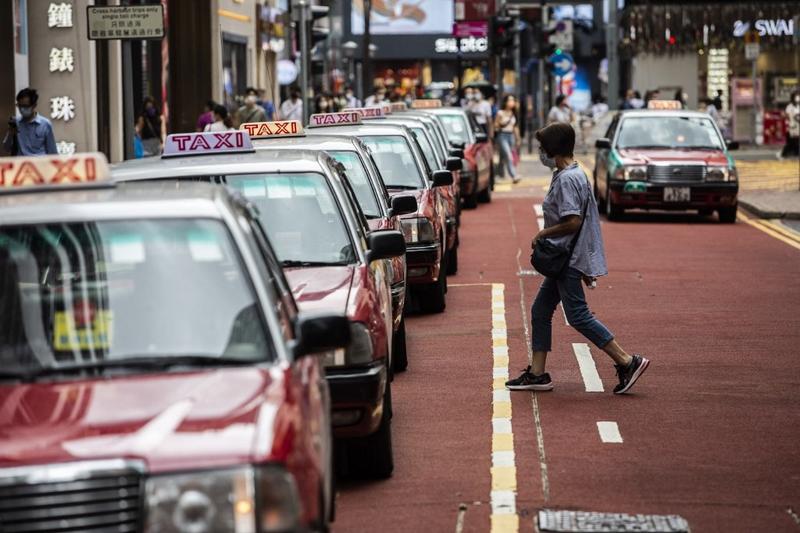 A woman walks past a row of taxis waiting for passengers in Hong Kong on July 16, 2021. (ISAAC LAWRENCE / AFP)

The two new cases involved a 36-year-old woman flying to the city from the United Arab Emirates and a 21-year-old woman from Bangladesh, according to a statement issued by the Centre for Health Protection.

The UAE case involved the L452R mutant strain and triggered a targeted exercise in Tuen Mun overnight. Some 300 residents at Block 6 of Handsome Court -- where the woman lives -- have been tested and no new COVID-19 case was detected.

You can imagine you have two vaccines at the same time, so naturally, you have more side effects, fever, fatigue, etc.

The woman left Hong Kong for Dubai on July 12 and returned on Monday. Her infection was classified as imported.

According to the CHP, a total of 23 cases have been reported in the past 14 days, including 22 imported cases and one import-related case.

A day earlier, two scientific committees under the CHP on Thursday recommended a minimum interval of 14 days between the administration of a COVID-19 vaccine and any other vaccine.

The recommendation is based on a study indicating that co-administration of two different vaccines may increase local and systemic side effects by about 15 percent, said Scientific Committee on Emerging and Zoonotic Diseases Chairman David Hui Shu-cheong said at a media session.

"You can imagine you have two vaccines at the same time, so naturally, you have more side effects, fever, fatigue, etc," Hui said.

The same study also has shown that co-administration of the two vaccines may reduce the antibody level, he added.

The committees also said getting vaccinated against COVID-19 is a priority in particular for older adults and those with pre-existing conditions as they have a higher risk of severe disease and death.

"The elderly should receive the COVID-19 vaccine as soon as possible, well before the arrival of the winter influenza season," Hui said.

Both the mainland-made Sinovac and Germany-produced BioNTech vaccines are highly effective in protecting against severe diseases and death from COVID-19 infection, according to the committees.

The committees, meanwhile, considered that it is too early to confirm if a third dose of COVID-19 vaccine will be needed for the general population. They recommended to continue monitoring any new scientific evidence that becomes available.

As of Thursday night, more than 5.07 million doses of COVID-19 vaccine have been administered in Hong Kong since the rollout of the city's COVID-19 Vaccination Programme on Feb 26. Some 2.95 million people, or about 43.4 percent of the eligible population, have taken at least one shot of the vaccine, and more than 2.12 million people have been fully vaccinated.

In another development, the Hong Kong government said it had revoked quarantine exemptions for a Saudi Arabian consulate’s family after two children were found to have violated rules when undergoing self-isolation at home.

The 13-year-old girl and 11-year-old boy, who flew to the city on Friday, tested negative at the airport but the samples they gave later tested positive for the virus.

The boy was found to have visited the Peak Galleria and Cityplaza Phase 2 in Quarry Bay during self-isolation, while the girl had dined at Citygate shopping mall in Tung Chung.