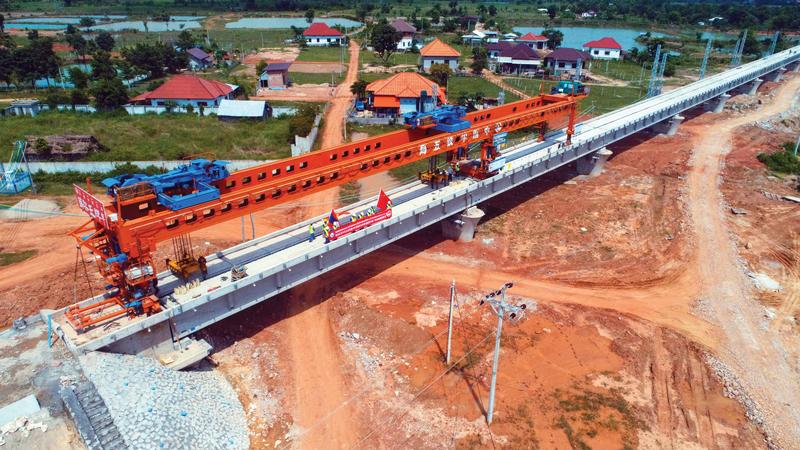 With the completion of the China-Laos Railway within sight, experts say the project will play a crucial role in improving Laos’ connectivity and supporting its post-pandemic recovery.

“Completing the project on schedule will help Laos’ post-pandemic recovery a lot, and it can promote trade, investment and tourism,” said Phouphet Kyophilavong, associate professor and dean of the Faculty of Economics and Business Management at the National University of Laos in Vientiane.

Noting that COVID-19 infections have remained low in Laos despite a recent outbreak, Phouphet said the project, when completed, is expected to help strengthen Laos’ cooperation with China and other countries in the region that have managed the pandemic relatively well.

The electrified passenger and cargo railway will conduct its first trial run in August, Vientiane Times reported on June 23. The project will be fully completed and begin operation in December as scheduled, five years after construction began.

While most of the construction sites are located in tropical mountainous areas, with complex geographical and poor traffic conditions, Xiao Qianwen, general manger of the Laos-China Railway Co, a joint venture for the project’s construction and operation, was quoted by Xinhua News Agency as saying that the company has been striving to complete construction by Dec 2.

The railway, which is the first modern railway in Laos and the longest outside China in Asia, is a major project under the Belt and Road Initiative, one that also synergizes with the Lao government’s plan to transform the Southeast Asian country from a landlocked country to a land-linked hub.

The venture, built with Chinese management and technical standards, features an investment of 37.4 billion yuan (US$5.78 billion).

The railway stretches more than 1,000 kilometers from Kunming, capital of China’s Yunnan Province, to Laos’ Vientiane and is expected to slash travel time between the two cities to less than a day, according to China State Railway Group Co.

The Lao section, which links Boten border gate in northern Laos with Vientiane, spans more than 400 kilometers, with trains set to operate at 160 km per hour. It will cut transport costs by 30-40 percent compared with traveling by road.

Noting that Laos is one of the 32 landlocked developing countries in the world, Sandra Seno-Alday, lecturer of international business at the University of Sydney Business School, said the new China-Laos Railway will increase the nation’s transport connectivity.

“Landlockedness has been identified as a really big challenge to economic development, simply because about 90 percent of world trade is done by sea,” Seno-Alday said.

“The transport network, in turn, should give Laos access to tourism markets around its neighbors and particularly (the massive) China market,” she said.

“The Laos-China Railway will lay a new foundation for the introduction of foreign investment, and Laos will surely take advantage (of the railway) to participate in the regional and global industrial chain,” said Valy Vetsaphong, advisor to the Lao prime minister and vice-president of the Lao National Chamber of Commerce and Industry.

Noting that physical infrastructure which supports international business and trade will be a key factor for a company’s overseas expansion, Seno-Alday from the University of Sydney said the Lao government has also done “an excellent job” of establishing the equally important policy infrastructure to support trade.

This includes trade-facilitation measures that will allow smooth movement of goods across borders and make it easier for international companies to do business in Laos, Seno-Alday said, adding that the improvement of digital infrastructure will also be important in helping Laos better reap the benefits from the transport project.

Litthikay Phoummasak, president of Laos’ Small and Medium Enterprise Promotion Association, said he expects the railway to create more business opportunities for companies in Laos and beyond, particularly those in the tourism and logistics sectors.

He expressed the hope that the Lao government can come up with more supporting measures for local SMEs to benefit from the railway project.

Phouphet from the National University of Laos said that like many countries, Laos has also been suffering from economic slowdown and increased poverty due to the pandemic.

The economic growth of Laos declined to an estimated 0.4 percent in 2020, the lowest level in three decades, according to the World Bank.

As the railway is expected to further link with other member countries of the Association of Southeast Asian Nations, Phouphet said the project will enable the ASEAN region to promote trade, investment and the free flow of labor.