China on track for glory 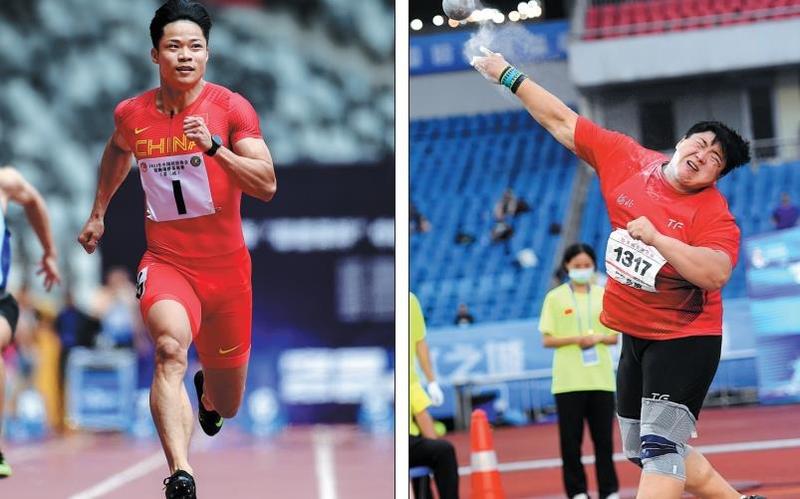 Sprinter Su Bingtian and shot putter Gong Lijiao are two of the most experienced members of Team China's track and field squad. In Tokyo, the 31-year-old Su will aim to become the first Chinese to reach an Olympic 100m final, while reigning world champion Gong, 32, is going all out for gold at the Games. (PHOTO / XINHUA)

Editor's Note: In the first installment of a preview series on China's chances at the Tokyo Olympics, China Daily takes an in-depth look at the nation's track and field squad.

After an extra year of waiting, Team China's track and field stars are raring to deliver medals and breakthroughs at this summer's Tokyo Olympics.

With the COVID-19 pandemic and the resulting postponement of the Games presenting unprecedented challenges for the nation's athletes, domestic events have replaced international meets as the most effective way to gauge their preparations.

Last month's Chinese National Athletics Championships in Chongqing was the last of those tune-ups, with a number of encouraging performances boding well for the team's medal chances at the Games.

With the COVID-19 pandemic and the resulting postponement of the Games presenting unprecedented challenges for the nation's athletes, domestic events have replaced international meets as the most effective way to gauge their preparations

A few weeks previous at the Olympic trials in Shaoxing, Zhejiang province, Gong's winning throw of 20.31m saw her become the first female shot putter in the world this year to break the 20m mark.

"I can feel the Olympic gold medal is right in front of me, and I'm really looking forward to competing at the Games," said Gong after her victory in Chongqing.

"I'd actually planned to refresh my personal best here. However, just before my final throw, the sudden sound of cheering for the javelin competition disrupted my pace a little bit. I hope I won't have such a regret and can deliver my best performance in Tokyo.

"My good form in recent competitions is not unexpected. I've had quality and comprehensive training, and now I can consistently go beyond 20 meters.

"I believe I can have even better results at the coming Olympics."

"The top Chinese race walkers－big sister Hong, Qieyang Shijie and me－are actually also the top athletes of the sport across the globe. So the domestic events are already very competitive," the 25-year-old Yang told Xinhua.

"I'm the youngest among the three of us, and I haven't competed in any Olympics. So competing with them means a lot more pressure for me… As for the postponement of the Games, I think it's beneficial for me.

"Last year I wasn't in great shape, and now I'm feeling a lot better and have had more time to prepare. Physically and technically I'm in better condition, and that's why I refreshed the world record this March.

"Due to the pandemic, I haven't competed in any events over the last year. So I was not that confident and I felt I lost some momentum for that period of time.

"In 2016 I went to the Rio Olympics, but then I was just a reserve athlete. So, I know what it feels like to have to just sit there and watch, and that's why I've kept fighting until now."

For veteran Liu, her fourth Olympics will likely be her last Games. After winning gold in Rio, she retired from race walking to become a mother.

However, she decided she had some unfinished business at the Olympics and returned to competition in 2019, when her daughter was barely a year old.

Liu admits that trying to take on the youngsters, as well as taking care of her daughter, is a lot of work.

"I think as an athlete, I'm now an explorer. I'm trying to seek a new solution for those who want the same thing that I want in a similar situation," Liu told thepaper.cn.

"Actually I have achieved everything that a race walker can achieve, but now I still have some dreams to be fulfilled.

"I know some people may not understand my choice, but for me this is very natural. I'm proud of myself as I have surpassed the previous me."

Liu said the pandemic had massively disrupted her training plans, but, as a mother, she was more worried about her daughter, who traveled with her over the last year from city to city for training and competition.

"The postponement of the Tokyo Games was unexpected, but for me it had a big effect on my daughter, who now needs stability in her life and to go to kindergarten," said Liu.

"Changing bases from time to time is normal, as it helps freshen up our training. Competing is not only my personal business, it's also a challenge for my family. But still I want my daughter to witness my journey as I chase my dream again."

The Chinese athletics squad won two golds, two silvers and two bronze medals five years ago in Rio－certainly nothing to be ashamed of, but still relatively far behind the world's track and field powerhouses such as the United States, which counted 13 golds among its 32-medal haul in Rio.

That leaves plenty of room for improvement, especially on the track, where China's sprinters are hopeful of some breakthroughs.

Veteran Su Bingtian heads to Tokyo in impressive form after clocking 9.98 seconds to win the 100m at the nationals in Shaoxing. It was the seventh time the 31-year-old has dipped under the 10-second mark in the discipline. "If everything goes well, and I can stay in good shape, then I'm confident that I can go under 10 seconds in Tokyo," said Su after that victory.

"My overall condition is good now, but there are still some minor issues to sort out. I still have room for improvement."

Su, who became the first-ever Asia-born sprinter to break the 10-second barrier in the 100m in 2015, has not had an easy journey to the Tokyo Olympics.

READ MORE: For Tokyo 2020 ticketholders, an Olympic dream gets dashed

The pandemic wiped out the entire 2020 season to thwart his comeback plans from a waist injury, sustained in late 2019.

Now, thanks to "the effort and help of his support team", Su is feeling somewhere close to the form that saw him run an Asian-record 9.91 seconds in 2018, and clock 9.92 to take that year's Asian Games title in Jakarta.

"For athletes who are not strong enough to stand on the podium at the Olympics, the postponement of the Games was not necessarily a bad thing. That meant one more year of preparation," Xie told China Newsweek.

"The men's 100m for me or Su is about making breakthroughs. China has never made it into an Olympic 100m final before.

"In terms of the 200m, my goal is also to make the final. We are not very strong over these distances, so this time we want to make some history."