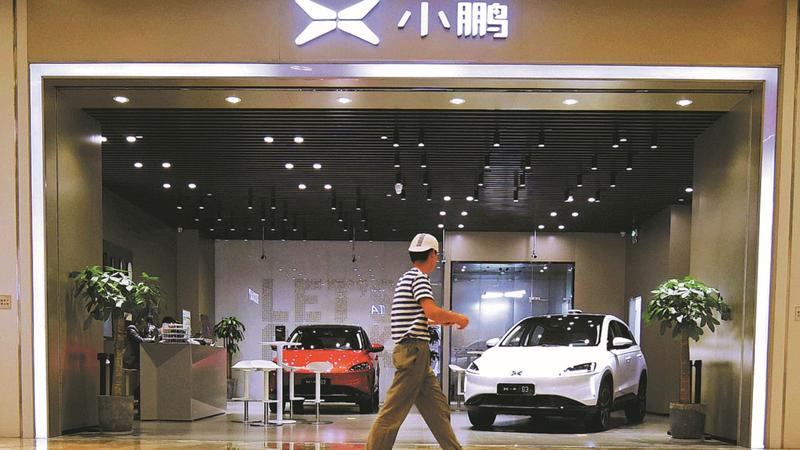 In this undated file photo, a visitor passes by a dealership of Xpeng Motors in Hangzhou, Zhejiang province. (LONG WEI / FOR CHINA DAILY)

The US-listed firm sold 85 million shares at HK$165 each, according to an exchange filing on Wednesday, confirming an earlier Bloomberg News report. The offer price represents a discount of about 4.1 percent to its closing price of US$44.32 on Tuesday on the New York Stock Exchange.

Xpeng had set a maximum price of HK$180 for the portion reserved for retail investors. One of Xpeng’s American depositary shares is equivalent to two ordinary shares. Trading in the HKSAR is slated to start on July 7

Xpeng had set a maximum price of HK$180 for the portion reserved for retail investors. One of Xpeng’s American depositary shares is equivalent to two ordinary shares. Trading in the HKSAR is slated to start on July 7.

Xpeng is the latest to join a slew of US-traded Chinese mainland firms selling shares in the HKSAR, giving them a hedge against the risk of being kicked off American exchanges while broadening their investor base closer to home. About US$37 billion has been raised through such homecoming-listings since Alibaba Group Holding Ltd started the trend in late 2019. Prior to Xpeng, online travel platform Trip.com Group Ltd raised US$1.2 billion in a second listing in the city in April.

The Guangzhou-based firm will be the first among three US-listed Chinese EV makers to complete a dual listing. Nio Inc. and Li Auto Inc are also planning share sales in the Asian financial hub, Bloomberg News reported in March.

Xpeng went public in New York in August last year through an initial public offering that raised US$1.72 billion. The timespan makes the HKSAR listing dual primary instead of secondary, unlike the other homecoming listings, which require at least two years of trading on another exchange.

The stock in New York has declined about 39 percent from a Nov 23 peak but is still trading at almost triple its IPO price, giving it a market value of about US$36 billion.

After the rally in 2020, electric car-makers have seen their shares decline this year amid increasing competition from legacy automakers, the global semiconductor shortage and general wariness among investors about holding onto riskier assets.

READ MORE: Xpeng Motors kicks off production at its own plant in Guangdong

The HKSAR share sale will add to Xpeng’s war chest as it competes with an array of upstarts in Chinese mainland, the world’s largest market for electric vehicles. It has already raised billions of dollars through its share sales as well as bank loans.

Xpeng has yet to turn a profit, pledging to break even by late 2023 or early 2024. Revenue has been increasing, however, reaching 2.95 billion yuan (US$456 million) in the first quarter, with deliveries in May growing 483 percent compared to the same month a year earlier.

With the proceeds from the HKSAR offering, the company aims to expand its product portfolio and develop more advanced technology, develop new models and improve hardware technology, among other targets. The firm is also planning to expand its presence in international markets starting with some European ones.

JPMorgan Chase & Co and Bank of America Corp are joint sponsors for the HKSAR offering.