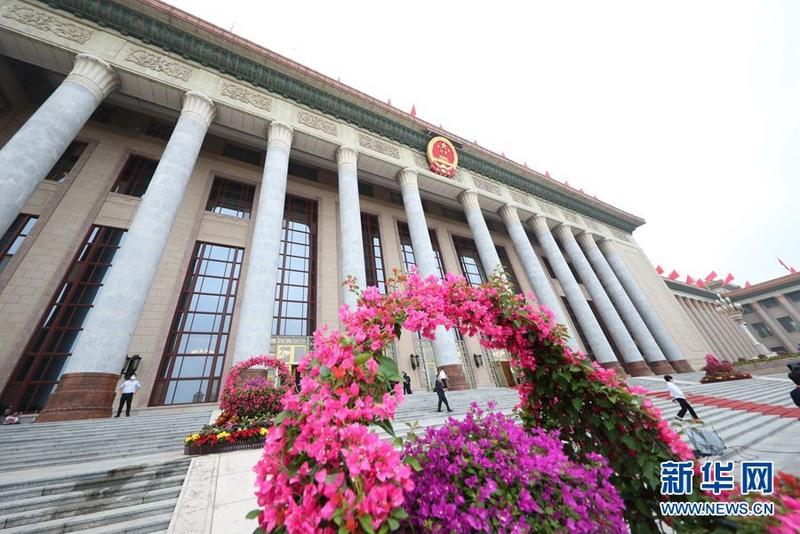 The Great Hall of the People in Beijing, where the ceremony awarding the July 1 Medal took place, is seen in this June 29, 2021 photo. (XINHUA)

BEIJING - Xi Jinping, general secretary of the Communist Party of China Central Committee, said on Tuesday that the CPC has written a splendid chapter in the history of the Chinese nation's development and that of humanity's progress over the past century.

Recipients of the July 1 Medal are ordinary heroes who fulfill their duties and make quiet contributions. Their deeds can be followed and their spirit can be pursued, Xi said

He made the speech at a ceremony to present the July 1 Medal, the Party's highest honor, to outstanding CPC members in Beijing in the morning.

A total of 29 CPC members who have made "outstanding contributions to the Party and the people" received the honor, some posthumously.

This is the first time the medal has been awarded as the CPC is set to celebrate its centenary on July 1.

In the Great Hall of the People, Xi draped the medals around the necks of the recipients, shook their hands and congratulated them.

Xi, also Chinese president and chairman of the Central Military Commission, addressed the attendees after presenting the medals.

Over the past 100 years, generations of CPC members have worked hard and made selfless contributions in the pursuit of national independence and the liberation of the people, as well as in striving for a prosperous and strong country and the people's well-being, said Xi.

Noting that the awardees have been outstanding representatives of CPC members on all fronts, Xi said they embody Party members' staunch faith, fighting and dedicated spirit, integrity and devotion, and loyalty to the Party's fundamental tenet -- putting the people at the very center of their hearts, and wholeheartedly serving the people. 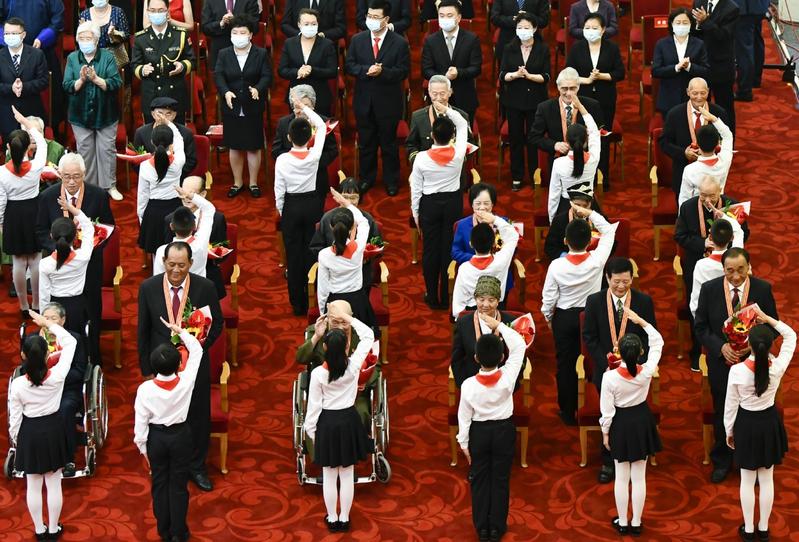 Members of the Chinese Young Pioneers salute recipients of the July 1 Medal after presenting flowers to them at the Great Hall of the People in Beijing on June 29, 2021. (PHOTO / XINHUA)

To maintain staunch faith is to stay true to the Party's original aspiration and dedicate everything, even one's precious life, to the cause of the Party and the people, said Xi.

All Party members should trust, love and devote themselves to the Party, he said.

The ceremony was presided over by Wang Huning, and attended by Li Keqiang, Li Zhanshu, Wang Yang, Zhao Leji and Han Zheng -- all members of the Standing Committee of the Political Bureau of the CPC Central Committee, as well as Vice President Wang Qishan.

Wang Huning read a decision of the CPC Central Committee on conferring the medals.

Recipients of the July 1 Medal embody the Chinese Communists' quality and spirit of maintaining staunch faith, and are heroes coming from the people, Xi said. They are everyday heroes that fulfill their duties and make quiet contributions. Their deeds can be followed and their spirit can be pursued, he added.

They include a veteran of the Red Army and those who fought in the War of Liberation and the War to Resist US Aggression and Aid Korea. They also include a volunteer who has spent decades serving her community, a Uygur village official resolutely fighting ethnic separatist activities, a welder, a weaver, a veteran diplomat and a police detective. 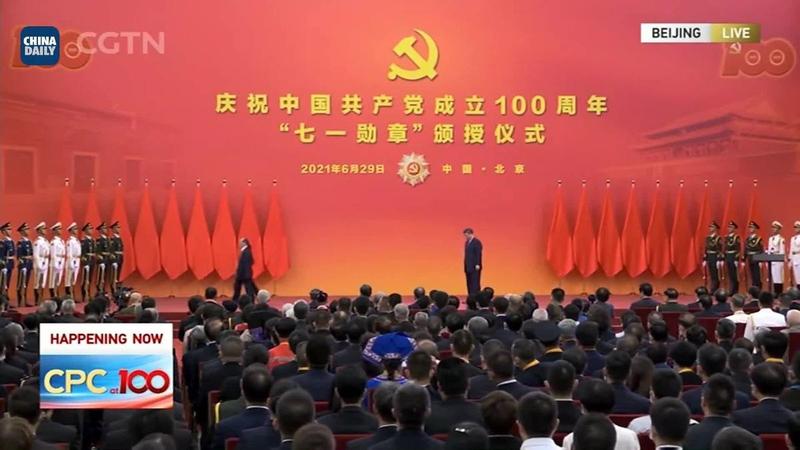 A battalion commander who sacrificed his life defending the Chinese border, a Party official who was sent to a village to fight poverty and died on the front line, and a war hero who worked in obscurity after retiring from the military were awarded the honor posthumously.

Zhang Guimei, the principal of a senior high school that offers free education to girls from impoverished families, called herself an "ordinary teacher" when she delivered a speech on behalf of the honorees after receiving her medal.

"The honor belongs to every CPC member working on different fronts," said Zhang. "What we've done is just what many CPC members are doing every day."

According to figures released last year, the CPC has more than 91 million members.

Xi called on the Party to follow the example set by the awardees, saying every CPC member can make accomplishments for the Party and the people in the great cause of national rejuvenation.

"The new era needs heroes and can give birth to heroes," he said. 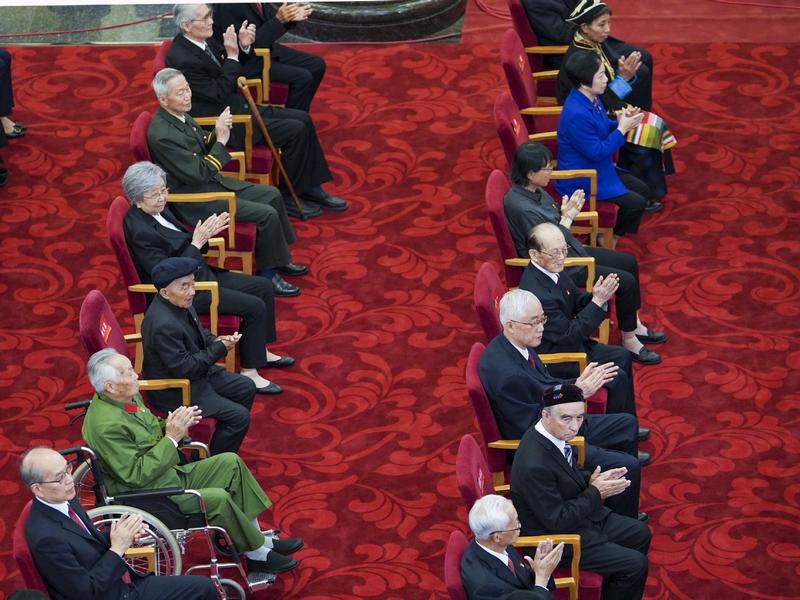 Recipients of the July 1 Medal clap during a ceremony to present the medals — the highest honor in the Party — at the Great Hall of the People in Beijing on June 29, 2021. (PHOTO / XINHUA)

At the end of the speech, Xi called on CPC members and officials to boldly advance toward the second centenary goal of fully building a modern socialist country, as well as the Chinese Dream of national rejuvenation.

After the ceremony, Xi and other leaders took a group photo with the medal recipients.

Before the ceremony, Xi and other leaders met with awardees of the titles of outstanding Party members, exemplary Party workers, and advanced community-level Party organizations from across the country, and took a group photo with them.

The meeting on awarding the three titles was held Monday, which was attended by Wang Huning and Zhao Leji.