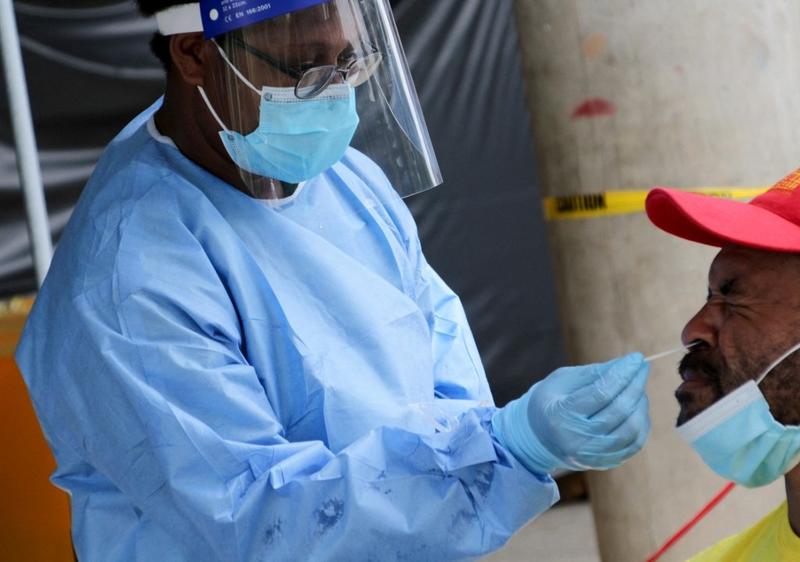 A health worker takes a swab from a man to test for COVID-19 outside a makeshift clinic in a sports stadium in Port Moresby, Papua New Guinea on April 1, 2021. (ANDREW KUTAN / AFP)

For much of the time since the COVID-19 pandemic broke out early last year, the island nations of the Pacific were considered among the luckier places in the world as they managed to avoid the worst of the outbreak. But all that changed recently.

In several countries in the region, there has been a spike in coronavirus infections in the past few months, upending people’s lives and straining the local health systems.

Border closures have isolated communities, hindered food supplies and crippled businesses and economies across the Pacific, a region that is almost entirely dependent on exports and tourism.

Since April there has been a dramatic rise in the number of COVID-19 infections in Fiji, with its case tally reaching 2,848 as of June 25, a day that a record 308 cases were reported, according to data from the World Health Organization.

In Fiji, the number of COVID-19 cases spiked in recent months, prompting calls for a total shutdown of the country. Before June, Fiji’s highest infections a day were less than 50 cases. In less than eight weeks, there have been about 1,500 cases of the Delta variant of the virus that ravaged India in recent months.

Raina MacIntyre, principal research fellow and professor of global biosecurity at the Sydney-based University of New South Wales, said the early easing of pandemic restrictions has contributed to the surge of the virus in the Pacific

In Papua New Guinea there were more than 17,000 cases recorded but the real figure is thought to be much higher. According to local media reports, one in three people are testing positive at the Port Moresby General Hospital.

This year has also seen a major spike in the number of cases recorded in French Polynesia, with 18,952 cases as of June 15 and 142 deaths.

Raina MacIntyre, principal research fellow and professor of global biosecurity at the Sydney-based University of New South Wales, said the early easing of pandemic restrictions has contributed to the surge of the virus in the Pacific.

“We do not have a good handle on what variants of concern are circulating (in the Pacific) and in what proportion,” MacIntyre said.

“More transmissible or vaccine-resistant variants may also account for the problems.”

Vaccine supply problems, logistics issues and misinformation over the jabs have also added to the problems facing Pacific Island nations, according to the professor.

The supply was initially only a small amount from COVID-19 Vaccines Global Access or COVAX, a worldwide initiative aimed at equitable access to coronavirus shots  and co-led by Gavi, the Vaccine Alliance; the Coalition for Epidemic Preparedness Innovations; and the World Health Organization.

One of the big problems facing the vaccination program in the Pacific has been cultural and anti-vaccine misinformation carried on social media.

Hassan Vally, an associate professor with the Department of Public Health at La Trobe University in Melbourne, said there is no “simple answer” as to why the virus has spread so quickly in the Pacific.

Vally, who has spent time working in both Fiji and Papua New Guinea, said one of the main problems health workers must try and overcome are the cultural differences in many of the Pacific Island countries where there is a suspicion of outsiders.

“Having said that, there are a lot of amazing people who are playing a prominent role in trying to fight this pandemic and getting the message across to ordinary people,” he said.

Papua New Guinea’s prime minister, James Marape, told Radio New Zealand, or RNZ, on June 18 that the government had done everything possible to provide COVID vaccines during a time of global demand.

If people did not get themselves vaccinated and later became sick or died, they only had themselves to blame, he said. 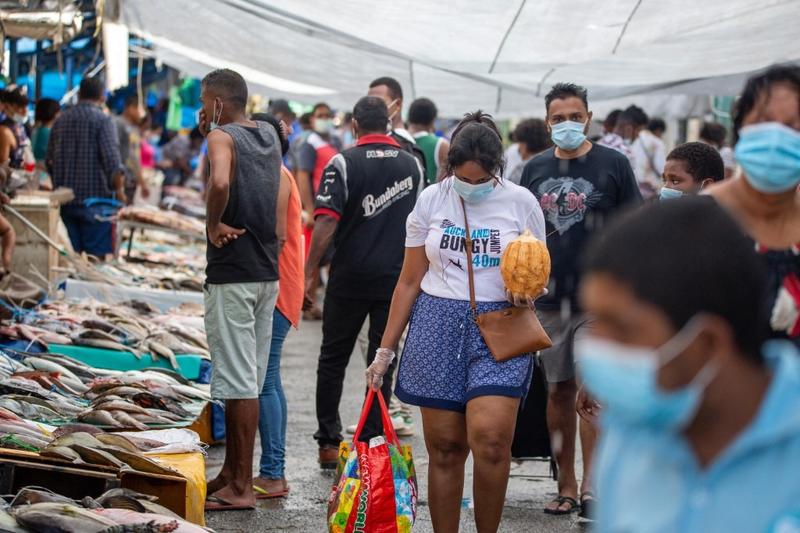 Glen Mola, the head of obstetrics and gynaecology at Port Moresby General Hospital, told RNZ that the PNG government could be more vigorous in quelling misinformation from anti-vaxxers.

Hassan Vally, an associate professor with the Department of Public Health at La Trobe University in Melbourne, who has spent time working in both Fiji and Papua New Guinea, said one of the main problems health workers must try and overcome are the cultural differences in many of the Pacific Island countries where there is a suspicion of outsiders

“It's just ridiculous that we spend hundreds of hours out of our precious health worker time countering the ridiculous conspiracy theories of a few people,” he told the radio, referring to people who are opposed to vaccinations and spread various misinformation, fueling vaccine hesitancy among the general public.

Authorities should exercise powers under the National Pandemic Act to declare people who spread fear on social media as a threat to public safety, Mola said.

Such people should be given a warning and told to halt their harmful activities. And if they fail to heed the warning, they should be sent to jail, he said.

He said he feels “extremely sad” that the group had ignored evidence that vaccines were vital to break the cycle of the pandemic, and instead promoted misleading information to the public.

“While I respect individual points of view, I will not allow deliberate misinformation to scare people that wish to protect themselves from COVID-19,” Sogavare said.

“If such deliberate misinformation continues, those involved will be held accountable in accordance with provisions of the relevant regulations.”

Henry Ivarature, a professor at the Australian National University, noted that the Pacific countries with the highest rates of COVID-19 infections are colonies unable to exercise sovereign control over their own borders.

The list includes French Polynesia, which went from 62 infections to more than 20,000 after its borders were opened to tourists last August, and American territory Guam, where the arrival of a US navy aircraft carrier seeded the virus on the island.

On May 21, China delivered 50,000 doses of Sinopharm to the Solomon Islands. The vaccine is now being used alongside AstraZeneca jabs to vaccinate frontline workers and "special groups", including students who plan to travel to China.

China has also pledged to provide 200,000 doses of Sinopharm to Papua New Guinea. Sinopharm was approved for emergency use by the World Health Organization in May — the first COVID-19 vaccine developed by a non-Western nation to receive this backing.