India's cases rise by more than 50,000 amid variant concerns 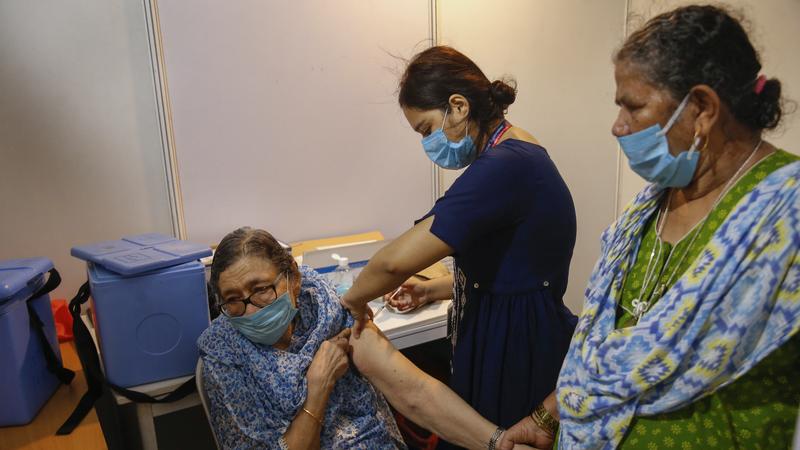 An elderly woman (left) holds the arm of her domestic helper as she receives Covishield vaccine against the coronavirus at a vaccination center in Mumbai, India, on June 22, 2021. (RAFIQ MAQBOOL / AP)

The COVID-19 death toll in the country rose by 1,258, including 511 deaths reported from the state of Maharashtra, the health ministry data showed.

New variants are a particular concern in India, where more than half the population has not been vaccinated. Less than 6 percent of India's adult population of 950 million has received two doses.

At least 20 cases have been found linked to the Delta variant, which India last week designated a variant of concern last week, according to the health ministry.

Johnson & Johnson’s one-shot vaccine could be available in India as early as July, India Today reported, without saying where it got the information.

The Association of Healthcare Providers is privately procuring the vaccine, which will be priced at US$25, the publication said. The vaccine will have limited supply, however, with only a few thousands thousand available initially.

Two Afghan businessmen have donated more than 10,000 oxygen cylinders to COVID-19 hospitals as the cases of the virus are on the rise in the Asian country, the Ministry of Industry and Commerce said Saturday.

"Following a request from the Minister of Industry and Commerce Nisar Ahmad Ghoryani to national businessmen to assist in providing the oxygen needed at COVID-19 hospitals in Afghanistan, Afghan national businessmen Khairuddin Mayel and Kamal Nabizadah imported from abroad more than 10,000 oxygen capsules and donated them to COVID-19 hospitals in Mazar-i-Sharif city and the national capital Kabul," the ministry said in a statement.

The donation of the oxygen cylinders would be helpful to ease the situation amid an acute oxygen crisis in the nation, according to the statement.

Afghanistan on Saturday recorded 1,095 new confirmed cases of COVID-19 after health authorities conducted 3,840 tests in the past 24 hours, bringing the total tally to 114,220, the Ministry of Public Health said.

A totoal of 300 COVID-19 patients were reported to have recovered, raising the number of recoveries from the pandemic in the Asian country to 67,483.

An additional 56 deaths from the coronavirus epidemic were recorded, bringing the overall death toll to 4,650, the ministry said in a graph providing daily COVID-19 figures.

Millions of Australians were under virus restrictions Sunday to fight a COVID-19 outbreak that includes the highly contagious Delta strain.

While the count of new local cases was comparatively low, including 30 in New South Wales state, officials fearful of the highly contagious variant warned the tally may climb. The flareup puts more pressure on the government to step up a vaccination program that has lagged behind some other developed nations.

“There will be cases that will follow,” Health Minister Greg Hunt said in a televised briefing Sunday, adding he’s confident the nation will contain the pathogen and that more vaccines are being rolled out.

The restrictions span the country, including a 48-hour lockdown from Sunday in Darwin - the capital of the Northern Territory - and another already underway in Sydney through July 9. Other rich nations like the US and UK are aiming to move past such steps after ramping up vaccines.

The Northern Territory’s Chief Minister Michael Gunner said he couldn’t rule out an extension of the Darwin lockdown, which followed the detection of four new local cases in the region. The cluster is linked to a worker at a Newmont Corp. gold mine in the Tanami Desert in the central Northern Territory, and hundreds of employees are now in isolation, according to a statement.

In New South Wales, where Sydney is grappling with the Delta variant, Premier Gladys Berejiklian said Sunday “case numbers are likely to increase even beyond what we have seen today.” The state’s 30 new local cases were recorded in the 24 hours through Saturday night, and some of those people were in the community while potentially infectious, Berejiklian said.

The official data showed that 19,262 samples were tested in the last 24 hours as of 8:00 a.m. local time Saturday across Bangladesh.

According to Brunei's Ministry of Health, Case 258 is a 38-year-old man and Case 259 is a 39-year-old woman, who both arrived in the country from Indonesia on June 13.

A new batch of Sinovac COVID-19 vaccines arrived in Phnom Penh, capital of Cambodia, on Saturday, giving another boost to the country's vaccination drive.

Speaking to reporters while receiving the vaccine at the capital's airport, Economy and Finance Ministry's permanent secretary of state Vongsey Vissoth said the vaccines were purchased from Chinese biopharmaceutical firm Sinovac Biotech.

He thanked China for supplying the vaccine to the Southeast Asian nation timely.

"The special bond of Cambodia-China friendship has played an invaluable role to ensure that the vaccines are available on time for Cambodia to inoculate our people," he said.

Cambodia has so far acquired more than 10 million doses of COVID-19 vaccines from China and the World Health Organization's COVAX Facility, Vissoth said.

Fiji recorded 266 new cases of COVID-19 and one more death in the last 24 hours, according to the Ministry of Health on Saturday.

Ministry of Health permanent secretary James Fong said 265 new cases are from the Lami-Suva-Nausori Containment Zone while one is from Nadi, Fiji's third largest city.

Indonesia has set a target of administering two million doses of the COVID-19 vaccine per day in August in efforts to curb the surge in coronavirus infections following the Eid al-Fitr holiday in May, according to President Joko Widodo on Saturday.

According to the president, the surge in COVID-19 cases in the Southeast Asian country was worsened by the inclusion of the more contagious coronavirus variants of concern such as Delta, Alpha and Beta.

"I hope that starting today the target of 1 million doses of vaccine (per day) is achieved for the entire Indonesian population and we will keep it until July. In August, we are targeting twice," Widodo said.

Indonesia on Saturday recorded 21,095 new confirmed cases of COVID-19 in the past 24 hours, marking the highest daily spike and bringing the total tally to 2,093,962, the Health Ministry said.

The shots are produced by Iran’s Actoverco Pharmaceuticals under a licensing deal with Russia. The company aims to produce 2 million doses of Sputnik V vaccines per month, the report said without providing details.

The pandemic has so far claimed 83,711 lives in Iran, up by 123 in the past 24 hours, the Iranian Ministry of Health and Medical Education reported.

The Iraqi Ministry of Health said Saturday that Iraq entered the "third wave" of coronavirus pandemic, while the ministry reported 4,814 new COVID-19 infections.

Spokesman of the ministry Sayf al-Badr told the official Iraqi News Agency (INA) that "the new wave in the country is more severe and dangerous than the previous waves that entered the country."

"Confronting the new wave requires focusing on precautionary measures, especially wearing masks and social distancing, in addition to vaccination," al-Badr said, stressing that the ministry has a plan to enhance the vaccination process by increasing the vaccination centers in Baghdad and other Iraqi provinces.

Separately, Ruba Falah, head of the ministry's media office, said in a press release that she predicts "strict and tough measures to curb the spread of the pandemic and prevent the entry of any other variants."

The number of active COVID-19 cases in Israel rose to 1,147 on Saturday, the highest since May 5, according to the health ministry.

Meanwhile, the ministry reported 175 new coronavirus cases, raising the total number in the country to 840,813.

The death toll from the virus in Israel remained unchanged at 6,429, while the number of patients in serious condition decreased from 27 to 26.

The movement restrictions will now stay in place until the nation’s daily caseload falls below 4,000, Muhyiddin said on Sunday, according to a tweet from the Bernama news agency.

The government will announce more comprehensive assistance to all groups of society on Monday or Tuesday, he said during a visit to a vaccination center in the state of Selangor.

Health Ministry Director-General Noor Hisham Abdullah said in a press statement that 10 of the new cases were imported and 5,793 were locally transmitted.

An additional 81 deaths from the coronavirus epidemic were reported in the Southeast Asian country, bringing the overall death toll to 4,884.

Mongolia recorded 2,432 COVID-19 cases in the past 24 hours, bringing the nationwide tally to 109,694, the country's health ministry said Sunday.

Meanwhile, 13 more fatalities were reported, including a two-month-old baby, taking the national death toll to 537, said the ministry.

Myanmar reported 783 new COVID-19 cases and eight more deaths in the past 24 hours, bringing the total infections to 152,356 and the death toll to 3,290, according to a release from the Health and Sports Ministry on Saturday.

Over 2.7 million samples have been tested for COVID-19 in the country so far.

New Zealand will extend the COVID-19 alert level in the capital Wellington for two days, as authorities said on Sunday there is still a risk from an Australian tourist who tested positive for the coronavirus after visiting the city last weekend.

Wellington, which moved to Alert Level 2 on Wednesday, will now remain at that level until Tuesday.

"It's clear that we are not out of the woods yet," COVID-19 Response Minister Chris Hipkins told a news briefing. "More testing and more results are required in order for us to feel confident in making a decision to lower alert levels."

The measure means social distancing rules will be in place across the city, but offices, schools and businesses may remain open.

Thailand on Sunday announced new restrictions centred around its capital in a bid to tackle the country's worst coronavirus outbreak.

The new measures, which will be implemented for 30 days from Monday, include a ban on restaurant dine-ins in Bangkok, the capital, and five surrounding provinces, according to a document published in the country's royal gazette.

Shopping malls in Bangkok and the five provinces must be closed by 9 pm, and parties or celebrations, or activities involving a gathering of more than 20 people will be banned for the same duration, the document said.

It also said construction sites in the six areas will be shut down and workers' camps will be sealed off to contain clusters. The order followed the emergence of more clusters in construction camps in the capital, which has 575 such sites housing about 81,000 workers.

Thailand on Saturday reported 4,161 new confirmed cases of COVID-19, marking the highest daily tally since May 31, and 51 more deaths from the coronavirus epidemic.

The capital Bangkok still topped the list by regions with 1,276 new cases reported in the last 24 hours.

An additional 51 fatalities from the pandemic were reported Saturday in the Southeast Asian country, bringing the overall death toll to 1,870.

The Philippines' Department of Health (DOH) reported on Sunday 6,096 new COVID-19 infections, bringing the total number of confirmed cases in the Southeast Asian country to 1,397,992.

The death toll climbed to 24,372 after 128 more patients died from the viral disease, the DOH said.

Turkey on Saturday confirmed 5,266 new COVID-19 cases, including 470 symptomatic ones, raising the total number in the country to 5,404,144, according to its health ministry.

Vietnam reported 738 new COVID-19 cases on Saturday, the highest daily tally since the pandemic hit the country, with the majority detected in the southern Ho Chi Minh City, according to the Ministry of Health.

The new infections included 727 locally transmitted and 11 imported cases, bringing the total tally to 15,275, the ministry said in its latest report.