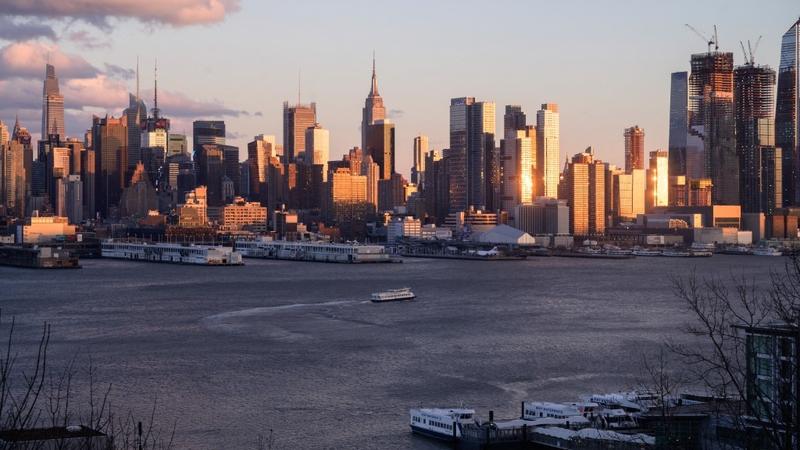 A general view of the Manhattan skyline is seen on March 14, 2021 from Weehawken, New Jersey. (ED JONES / AFP)

NEW YORK - Chinese companies have become less contented with the US business environment due to an overall adverse impact of COVID-19 and China-US relations, but remain committed to American customers, an annual survey by the China General Chamber of Commerce (CGCC)-USA Foundation showed.

The survey of 183 senior executives in March and April showed that 40 percent of the respondents said that US investment and business environment is "unsatisfactory" or "very unsatisfactory," more than double from the 16 percent in 2019.

According to a survey by the China General Chamber of Commerce (CGCC)-USA Foundation, 40% of the respondents said that US investment and business environment is "unsatisfactory" or "very unsatisfactory", more than double from the 16% in 2019

Moreover, 79 percent of respondents said the business environment for Chinese companies has worsened substantially or moderately from a year ago, whereas 55 and 52 percent said so in 2020 and 2019.

Meanwhile, 82 percent of respondents said the pandemic had severe or minor negative impacts on their companies' financial performance, down by 8 percent from a year ago.

Thirty-nine percent said their new investments in the country had decreased year-on-year, up from 17 percent in 2020 and 9 percent in 2019 and 2018 respectively, while 13 percent said anti-China or anti-Asia sentiment had impacted their businesses and caused economic losses, a drop from last year's 36 percent.

Over 70 percent of respondents said that the tightening of work visa authorizations or immigration policies have had a negative effect on their operations, according to the survey.

READ MORE: US urged not to suppress Chinese enterprises

Chinese companies are seeking to strengthen their long-term competitiveness in the US market through effective legal compliance, stronger brand recognition, better use of technology, and streamlining business operations, said Xu Chen, CGCC chairman.