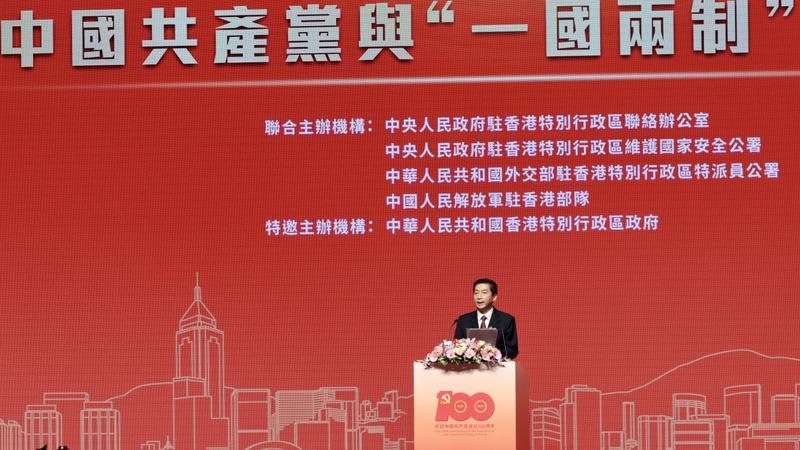 Luo Huining, director of the Liaison Office of the Central People’s Government in the HKSAR, delivers a keynote speech at a high-level seminar on the relationship between the Communist Party of China and the “one country, two systems” principle at the Hong Kong Convention and Exhibition Centre on June 12, 2021. (EDMOND TANG / CHINA DAILY)

The Hong Kong Episode in The Centennial Success Story

of The Communist Party of China

- Keynote speech at the Forum on “The Communist Party of China and the ‘One Country, Two Systems’ Model”

Good morning! In about two weeks, we will mark the centenary of the Communist Party of China (CPC) and the 24th anniversary of Hong Kong’s return to the motherland. Today, the central government’s institutions in the Hong Kong Special Administrative Region are pleased to join the SAR government and people from different walks of society in celebrating the extraordinary journey the CPC has embarked on advancing the cause of “one country, two systems”. We hope that the wisdom and strengths drawn from this journey will help to pave the way forward.

A hundred years ago, China was reduced to a semi-colonial and semi-feudal society with its land torn apart and its people living in poverty and despair. A hundred years later, the Chinese nation has stood up, grown prosperous and become strong - a tremendous transformation achieved by the Chinese people under the leadership of the CPC. General Secretary Xi Jinping has observed that the CPC’s centennial history bears witness to the party’s steadfast commitment to its original aspirations, painstaking efforts in laying a solid foundation for the rise of the Chinese nation, and relentless striving toward shaping a magnificent future. Hong Kong is a firsthand witness to the epic history of the CPC, in which the cause of “one country, two systems” constitutes a splendid chapter.

- The Communist Party of China advanced the cause of “one country, two systems”. Since Hong Kong’s return, the cause of “one country, two systems”, under the leadership of the CPC, has been making steady progress. In the political realm, the CPC properly handled the relationship between maintaining the comprehensive jurisdiction of the central government and safeguarding the high degree of autonomy enjoyed by the special administrative region; made five interpretations of the Basic Law; promulgated the Law of the People’s Republic of China on Safeguarding National Security in the Hong Kong Special Administrative Region; and improved the SAR’s electoral systems. As a result, the constitutional foundation was further improved for the practice of “one country, two systems” in Hong Kong. In the economic realm, the CPC bolstered the role of the mainland as a powerful backer for Hong Kong while encouraging the latter to improve its competitiveness; put in place a raft of favorable policies for Hong Kong and its people; supported Hong Kong in its battle against two financial crises and two major public health emergencies. As a result, Hong Kong has been able to remain rock solid in the face of adversities. In the cultural realm, the CPC encouraged Hong Kong to leverage its strength as an international metropolis and the meeting place of Chinese and foreign cultures; to expand and deepen exchanges and cooperation with the mainland; and to actively engage itself in international cultural exchanges. As a result, Hong Kong’s international influence kept rising. I am curious to know how the western media, which had proclaimed the “death of Hong Kong” before its return, would explain the fact that Hong Kong has been ranked the world’s most competitive region for many consecutive years. It is safe to assume that those, who are still bad-mouthing Hong Kong and proclaiming the “death of two systems”, will again be proved ignorant and biased by history.

- The Communist Party of China defended the cause of “one country, two systems”. Since the return of Hong Kong, the practice of “one country, two systems” has achieved a world-recognized success. At the same time, misconceptions and distortions emerged in the process as a result of propaganda by anti-China forces. The turbulence over the extradition bill in 2019, in particular, seriously jeopardized the rule of law and social order; seriously undermined the prosperity and stability of Hong Kong; and seriously breached the bottom line of the “one country, two systems” principle. Many people couldn’t help wondering if the “one country, two systems” policy would survive the crisis and carry on. Faced with the gravest challenge since Hong Kong’s return, the CPC Central Committee, led by Comrade Xi Jinping, acted in strict accordance with the law in the administration of Hong Kong; fortified the safeguards of national security; upheld the fundamental principle of “patriots administering Hong Kong”; and foiled the plot of anti-China forces to stage a “color revolution”. The practice of “one country, two systems” was subsequently returned to the correct path. It is hard to fathom whether Hong Kong would at all be able to pull itself out of the morass of violence and achieve the transformation from chaos to order if it weren’t for the central government which acted timely and decisively to set things right. What had transpired then further convinced the people of Hong Kong that “two systems” is predicated on “one country”. “One country” is like the roots of a tree. For a tree to grow tall and luxuriant, its roots must run deep and strong.

History is a record of the past, and a guide to the future. The history of the practice of “one country, two systems” in Hong Kong brings to us many lessons and inspirations.

Secondly, to advance the cause of “one country, two systems”, it is imperative to keep improving the institutions and mechanisms related to the implementation of the Constitution and the Basic Law. The vitality of a political system lies in its ability to reform and improve itself. Over the past 24 years, the CPC kept enriching and advancing the policy of “one country, two systems” both theoretically and practically, elevating this concept from being a “novel and major issue” of governance to a “fundamental policy” and “outstanding strength” of socialism with Chinese characteristics. The practice of “one country, two systems” in Hong Kong has greatly enriched the CPC’s practice in governing China in the new era. Going forward, the country will keep modernizing its governance system and capacity, while socialism with Chinese characteristics will advance to a more mature stage. The central government will, in the meantime, continue to uphold and improve the “one country, two systems” framework. On its part, Hong Kong should strive to uphold, improve, recalibrate and update the institutions and mechanisms related to its constitutional order. Facts will continue to prove that the “one country, two systems” framework, with its loopholes plugged, deficiencies addressed and different interests balanced, will better safeguard national sovereignty, security and development interests; better implement the comprehensive jurisdiction of the central government; better promote the lasting prosperity and stability of Hong Kong; and better safeguard the freedoms and democratic rights of Hong Kong residents.

Thirdly, to advance the cause of “one country, two systems”, it is imperative to promote the greater integration of Hong Kong into the national development strategy. The destiny of Hong Kong has always been intertwined with that of the motherland. The country remains the strongest source of support for the betterment of Hong Kong. Back in the 1960s when the mainland was still extremely underdeveloped, the central government invested huge sums on the Dongjiang-Shenzhen Water Supply Project and the operation of the “three express trains”, from which Hong Kong gets 80 percent of its water supply and 90 percent of livestock and farm produce. Many Hong Kong investors returned to the mainland after the country started reform and opening up. They contributed to the nation’s economic take-off, which in turn ushered in the golden era for Hong Kong’s economy. After its return to the motherland in 1997, Hong Kong doesn’t have to pay a penny in tax to the State, which, however, has always been there to support Hong Kong in times of adversity. Today’s China is becoming ever more open and prosperous, and the central government is in a stronger position to help Hong Kong boost its strengths and surmount challenges. Hong Kong will be able to derive more opportunities from the country’s new development strategy, the Guangdong-Hong Kong-Macao Greater Bay Area and the 14th Five-Year Plan. Facts will continue to prove that by strategically positioning itself and playing a more active role in the national development, Hong Kong will surely be able to develop new strengths, resolve deep-seated economic and livelihood problems, and achieve further development to the benefit of the people.

The modern history of China is replete with sufferings and setbacks. Following the Opium War, Hong Kong was separated from the motherland. China was then thronged with bandits and imperial powers with the Chinese people subjected to humiliation and indignity. Today, the people of New China, founded by the Chinese people under the leadership of the CPC, can hold their heads high and are the masters of their country. We firmly believe that as the motherland marches toward a great modern socialist country, Hong Kong compatriots will have a heightened sense of belonging to the motherland, an improved acknowledgment of the CPC, and a stronger sense of pride for being Chinese. Under the leadership of the CPC Central Committee led by Comrade Xi Jinping, and with the concerted efforts of 1.4 billion Chinese people including the compatriots of Hong Kong and Macao, the Chinese dream of the great rejuvenation of the Chinese nation will most certainly come true. The practice of “one country, two systems” in the new era will most certainly add brilliant new chapters.