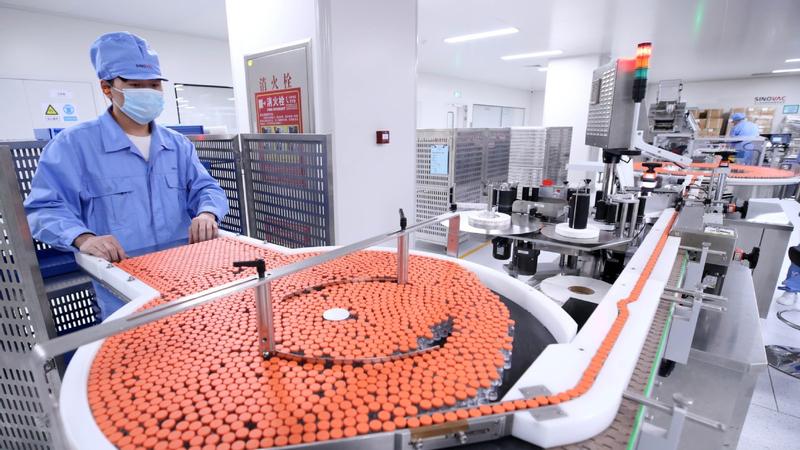 Employees of Sinovac Life Sciences process CoronaVac vaccine vials on Feb 24. As of Feb 23, about 97 countries and regions have administered more than 208 million doses of COVID-19 vaccines. (PHOTO BY CHEN XIAOGEN / FOR CHINA DAILY)

China has provided more than 350 million doses of its COVID-19 vaccines overseas and is stepping up domestic production to further increase the foreign supply, especially to developing countries, a senior health official said on Sunday.

"The No 1 priority for the global fight against the COVID-19 pandemic is to expand and accelerate mass vaccination, which rests on boosting vaccine production and promoting equitable access," said Zeng Yixin, deputy head of the National Health Commission.

"The country is now scaling up production to ensure smooth progress of its inoculation campaigns, while also exhausting all means to offer assistance to the international community, particularly those in the developing world," he said.

China has issued conditional market approval to four COVID-19 vaccines and granted authorization for emergency use to three candidates. As of Saturday, about 763 million doses had been administered in the country, according to the commission.

The No 1 priority for the global fight against the COVID-19 pandemic is to expand and accelerate mass vaccination, which rests on boosting vaccine production and promoting equitable access.

"It is clear from data that China has been striving to balance domestic vaccine rollouts and global supplies," Zeng said, adding that the stable epidemic situation has created favorable conditions for the country to achieve the balance.

More importantly, Zeng said, China is deeply committed to upholding the vision of "a community with a shared future for mankind," and honoring its promise made in May last year that all vaccines it develops will be for the public good.

"The pandemic has again underlined the significance of and the wisdom embedded in the vision," he said. "No country can conquer the virus or stay safe on its own. Global unity and coordination must be promoted.

"That's why we have been acting with a global mindset and in an altruistic manner, while rejecting narrow-minded nationalism and unfounded suspicion," he added.

In order to ramp up global vaccine coverage, strong vaccine production and sufficient supplies are a prerequisite. "In China, the speed and scale of capacity expansion have both exceeded our expectations thanks to concerted efforts from manufacturers and governments," Zeng said.

China's COVID-19 vaccines are gaining increasing recognition around the globe, according to Zeng.

Two domestic vaccines, developed separately by Sinopharm's Beijing Institute of Biological Products and Sinovac Biotech, recently gained emergency-use approval by the World Health Organization, which attested to their safety and efficacy, Zeng said. The approval allows the two vaccines to be included in COVAX, a major global vaccine-sharing platform.

Data from real-world use of Chinese vaccines has added to growing evidence of their effectiveness in reducing infections and death rates, he said.

In a town in Brazil with a population of 46,000, about 90 percent of residents age 18 or above were inoculated with doses donated by Sinovac Biotech. Compared with neighboring towns that had enforced the same disease control measures, but had not inoculated a large proportion of the population, the town reported a 95 percent reduction in the mortality rate and an 80 percent drop in symptomatic infections.

"The case in Brazil has showcased strong protection from Sinovac vaccines and has injected confidence into the global fight against the virus," Zeng said.

With growing confidence in the vaccines' role in curbing the spread of the disease, Zeng said it is worthwhile for the WHO to consider adjusting requirements on submitting data on third and late stage clinical trials when reviewing experimental vaccines for emergency use.

"Many enterprises around the world are confronted with difficulties in launching phase three clinical trials after completing all preclinical tests and earlier stages of trials, as well as passing manufacturing facility examinations as requested," he said.

READ MORE: WHO approves Sinovac virus vaccine for emergency use

"Since we have accumulated a sufficient amount of data to prove that vaccination is an effective way to prevent COVID-19 infections, it is suggested that the WHO consider waiving third-stage trial results for emergency-use evaluations."

Zeng said the proposal, if implemented, has the potential to sharply increase global vaccine supplies, reduce costs and speed up the global vaccination process.

He added that public health measures, such as wearing masks and social distancing, should be deployed together with mass inoculations.