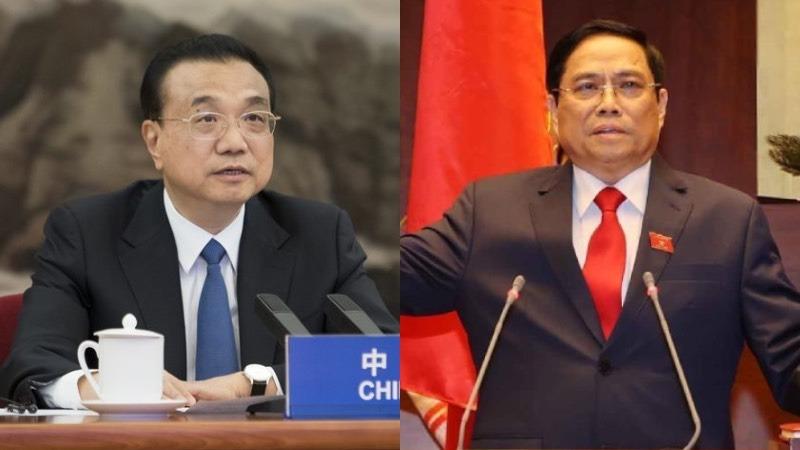 During their talks, the two leaders also agreed to properly handle maritime issues in accordance with the consensus reached between the two sides and jointly safeguard peace and stability in the South China Sea.

The two leaders' talks took place at a time when the two countries are faced with the impact of COVID-19 and challenges brought by the world economy's rising uncertainty and instability.

The expansion of mutually beneficial and win-win cooperation between China and Vietnam is conducive to East Asia's economic stability and recovery, Chinese Premier Li Keqiang said

The expansion of mutually beneficial and win-win cooperation between China and Vietnam is conducive to East Asia's economic stability and recovery, the premier said.

Beijing is ready to strengthen cooperation with Hanoi in COVID-19 prevention and control, as well as the research, development and production of vaccines, Li added.

China will continue to provide support and assistance to Vietnam within its capabilities, and it is hoped that the Vietnamese side will facilitate the vaccination of Chinese citizens in Vietnam, he said.

Economic and trade cooperation has been an important pillar and highlight of bilateral relations, and Vietnam has become China's sixth-largest trading partner.

With the joint efforts from both sides, bilateral trade overcame the difficulties of the contagion and total trade volume surpassed $190 billion last year despite the headwinds, reaching a new high, according to Chinese Ambassador to Vietnam Xiong Bo.

Speaking on overall economic collaboration, Li said China is willing to work with Vietnam to strengthen the synergy between the Belt and Road Initiative and Hanoi's Two Corridors and One Economic Circle vision.

Beijing will further promote the construction of cross-border economic cooperation zones with Hanoi, and maintain the stability and smooth operation of industrial and supply chains, he added.

To better benefit the people of the region, China is willing to make joint efforts with relevant countries, including Vietnam, to promote the early enactment of the Regional Comprehensive Economic Partnership free trade pact, Li said.

At the talks, the Vietnamese prime minister told Li that maintaining and developing the comprehensive strategic cooperative partnership between Vietnam and China is the top priority and a major emphasis.

Hanoi is willing to further strengthen its relations with Beijing and deepen cooperation in fields such as trade, investment, infrastructure and connectivity, and promote the healthy, stable development of bilateral relations, he said.

Noting that China and Vietnam are friendly neighbors linked by mountains and rivers, Li said the two sides have always cherished the profound friendship jointly created by leaders of the older generation since the start of their diplomatic relations more than 70 years ago.

At present, the leaders of the two countries maintain regular communication, he said.

It is hoped that the two sides will continue to enhance political mutual trust, continue to deepen practical cooperation and bring the bilateral comprehensive strategic cooperative partnership to a new level, Li said.

China extended warm congratulations on the 100th anniversary of the founding of the CPC on behalf of the Communist Party of Vietnam, as well as the Vietnamese government and people.