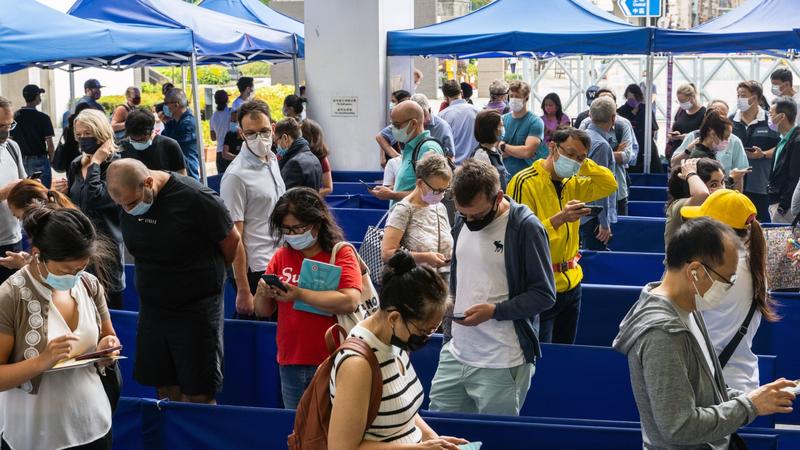 People stand in line outside a community vaccination center in Hong Kong, on April 26, 2021. (PHOTO/BLOOMBERG)

HONG KONG - The Hong Kong government is studying whether to lower the age limit for those receiving BioNTech’s vaccine against COVID-19, a spokesperson for the Food and Health Bureau said Tuesday.

In a statement issued on Tuesday night, the spokesperson said the Department of Health received on May 29 an application from Fosun Pharma to lower the age limit for receiving the Comirnaty vaccine to age 12 and the relevant phase three clinical trial data.

The spokesman said the request has been submitted to the Advisory Panel on COVID-19 Vaccines for consideration.

“The Secretary for Food and Health will consider the suggestions by the Advisory Panel. It is expected that a decision on the application for lowering the age limit for vaccination can be reached in short time,” the statement reads.

As of Tuesday, about 2,434,000 vaccine doses have been administered to residents under the city’s Vaccination Programme, according to a separate government statement.

Around 1,399,300 residents have received their first dose while around 1,034,700 have already taken their second shot.

Hong Kong has received around 4 million vaccine doses from BioNTech and Sinovac but health experts have suggested that the government should start selling some of the vaccines still in storage before they expire.

“In view of the serious vaccine hesitancy in Hong Kong, the chance of the procured vaccines being in surplus is high,” Chan said.

ALSO READ: CE: No ban on unvaccinated if inoculation rate improves by Aug

As of May 24, out of the two million odd doses each of the Sinovac and Comirnaty vaccine which have arrived in Hong Kong, there were 1.05 million and 840,000 unused doses, respectively, according to a government statement.

Hong Kong recorded one imported case on Wednesday involving a 58-year-old man from the United Arab Emirates, according to the Centre for Health Protection. The city’s tally stood at 11,848.

The CHP also clarified that the 35-year-old policeman who was reported infected with COVID-19 on Tuesday actually had a strain compatible with those found in vaccines and so he should not be considered as infected with the virus.

The CHP added that it was investigating how the policeman got contaminated while his close contacts would be released from quarantine if they test negative for COVID-19.

Meanwhile, HSBC Holdings Plc is offering all Hong Kong staff two days paid vaccination leave, as it responded to the city government’s ramped-up efforts to boost uptake of the inoculation in the Asian financial center.

A spokeswoman at the bank, which has over 20,000 employees in Hong Kong, confirmed the plan.

The move comes after Hong Kong Monetary Authority urged financial institutions to follow the government’s recent practice to give extra days of leave to vaccinated staff.

“In supporting the government’s vaccination leave measure, we will introduce the same for HSBC Hong Kong,” the memo said.

Local businesses are now responding to the call with goodies. Vision Finance Group is giving out free stocks worth as much as HK$1.5 million (US$193,340) to vaccinated clients citizens, while uSmart Securities is handing Sino Pharmaceutical Ltd and Pfizer Inc shares to new clients that have gotten the shots. China Construction Bank (Asia) is offering as much as HK$128,000 in free spending credits as a lucky draw for customers.

Other companies, restaurants, and even colleges have started offering cash payouts, extra time off, even the chance to win a US$1.4 million apartment.

The HKMA on Tuesday urged all banks to “strongly encourage” staff in client-facing roles or support functions to get vaccinated. It also told banks to hand over a list of staff they expect to be vaccinated.

Bank of America, which employs 1,600 people in Hong Kong, this week unveiled plans to get all of its staff back at their desks and encouraged its employees to get inoculated. The bank will also provide return-to-office training.