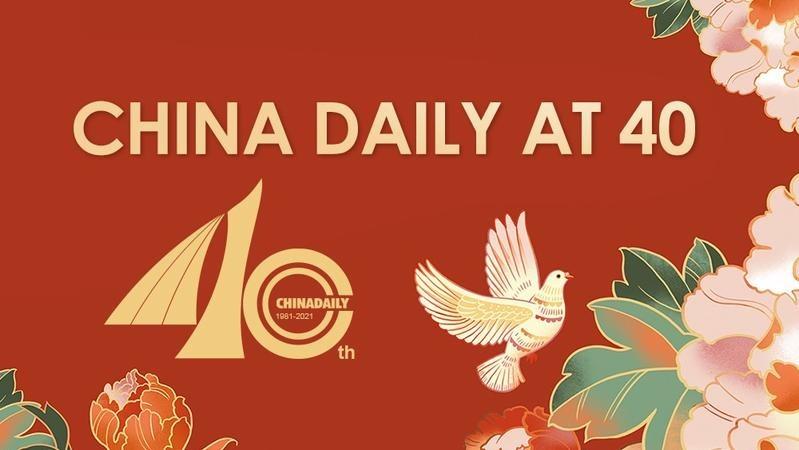 A bridge is needed when civilizations meet.

That was exactly the scenario when China opened its doors to the world more than four decades ago; now, it's all the more so given both China and the world have undergone profound changes.

China Daily, founded on June 1, 1981, has been such a bridge for communication and understanding.

When it started as an eight-page broadsheet, there was a scarcity of information about China. With scant coverage by the international media of what was happening, the world knew little of the country, except for a notion that the ancient nation offered infinite opportunities for business as well as cultural fulfillment.

As we celebrate the 40th birthday of China Daily today, the country is making headlines worldwide every day. But as is the usual case with a rapidly rising nation, particularly in a cross-cultural setting, the world is inundated with disinformation as much as information.

To be on the look-out for the well-being of the world is what good journalism is all about. We at China Daily take pride in recording all those eventful years when China made remarkable contributions to human civilization, along with monumental progress accomplished at home

While China opens wider to the world, some quarters of the globe seem to go the opposite way. Driven by prejudice and outdated mindsets, filters are constantly and stubbornly applied in the portrayal of China, apparently to fit subjective motifs and selfish purposes.

As The China Questions, a book published by the Fairbank Center of Harvard University noted, there's "an understanding deficit" of China, especially in the United States. That is a highly significant issue today, the preface explained, for the fact that "China has always mattered and always will", "but today China matters not only to the Chinese people", but also "to the entire world".

Undoubtedly, we have come to a new crossroads of history, seeking directions which will have far-reaching implications. Are we to build bridges or erect walls, to thrive in the global village or retreat to the islands of isolation, to embrace a shared future or enjoy the law of the jungle, to gallop forward with the tide of time or turn the clock back?

In reply to the question "where should humanity go from here", President Xi Jinping has stated that "we bear in mind the shared interests of mankind and make responsible and wise choices", so that "the giant vessel of human development will stay on an even keel and sail toward a brighter future".

To be on the look-out for the well-being of the world is what good journalism is all about. We at China Daily take pride in recording all those eventful years when China made remarkable contributions to human civilization, along with monumental progress accomplished at home.

China Daily is itself a product of the times, and we're fortunate to have thrived with the times. China is not what it used to be when we launched the paper, but to help promote understanding between China and the rest of the world, and in so doing, help build a better world, remains our mission and aspiration. We, as always, expect to work together with colleagues in and outside China toward that goal.

On this special occasion, and on behalf of China Daily staff, I express my sincerest gratitude to our readers worldwide, and to all those who have supported us one way or other.