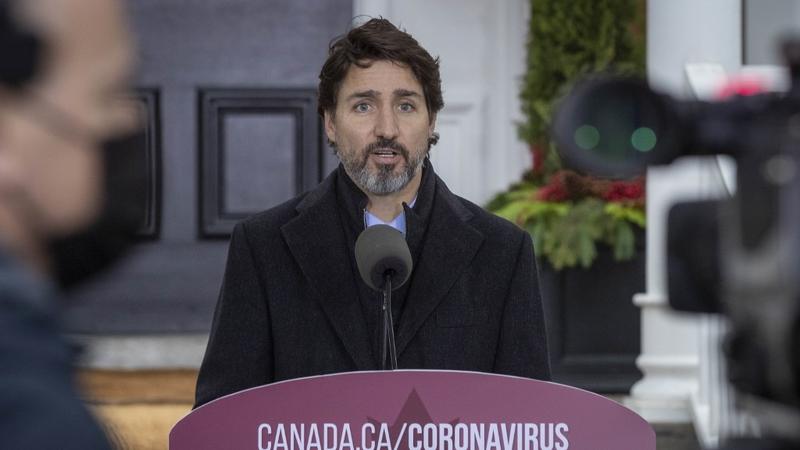 Senior officials have begun to formally talk about options for how to proceed, three people familiar with the matter said, speaking on the condition they not be identified. One question under consideration is whether to employ a two-track system in which quarantine and testing requirements would be relaxed for vaccinated travelers.

A separate official speaking on condition they not be named disputed there were any new developments or discussions on the border, saying there has been no discernible change in policy.

The world’s longest international border has been shuttered since March 2020 to most non-essential travel, dramatically reducing land and air traffic between the two countries. The restrictions have hit the nation’s tourism and airline sectors particularly hard - one estimate says the measures cost those industries about C$20 billion (US$16.5 billion) in revenue last year.

Any reopening of the border would be gradual and contingent on declining cases in both countries, the officials said.

Until now, France's vaccination programme has focussed on people over 50 or with underlying health conditions. But this week it was changed so anyone over 18 can book themselves for a shot - provided they can find a free slot.

That requires hitting refresh on online appointment booking websites, in the hope a free slot comes up, or waiting outside a vaccination centre.

While many of the people previously showing up for vaccinations cited health concerns as their reason for getting inoculated, many of the new, younger cohort, are focused on re-launching their social lives, according to interviews with people at vaccination centres.

"I'm going on holiday and I thought: 'If I can get vaccinated before I go, that will be good'," said Paul De Beon, 25, who was at a vaccination centre in south-west Paris.

At the start of France's vaccination campaign, opinion polls showed many people were reluctant to get the shot, partly because of concerns about rare side effects.

But opening up the vaccines to younger people has unlocked a surge in demand, said Tristan Eybert, who managers the velodrome vaccine centre.

Data from the US Centers for Disease Control and Prevention (CDC) showed that there are significant racial and ethnic disparities in COVID-19 vaccination in the country.

Vaccination rates among Black, Hispanic and Asian people are lower than those for the number of White people, and "these groups represent a smaller share of people fully vaccinated against COVID-19 than their share of the US population overall," CNN reported on Thursday.

The gap among Asian people is smaller, making up 5.3 percent of those fully vaccinated against 5.8 percent of the population, according to the CDC data.

White people account for 61.2 percent of the US population but 65.8 percent of those fully vaccinated against COVID-19, the data showed.

Germany returned the UK to its list of COVID-19 risk areas, widening the impact of Britain’s rise in cases linked to the so-called India variant.

The change, effective Sunday, is due to the “at least limited occurrence” of the B.1.617.2 variant first detected in India, Germany’s public health authorityu Robert Koch Institute said in a statement on Friday.

Germany reversed its stance four weeks after taking the UK off the risk-area list as the variant threatens the government’s plan to end the pandemic lockdown. The RKI said the UK was added because of the virus variant, rather than its relatively low number of cases relative to the country’s population.

The shift means travelers from the UK must register online before entering Germany and present a negative coronavirus test to avoid an extended quarantine.

The chief executive of Pfizer Inc said on Friday he had "very good reason" to believe in the success of an oral COVID-19 antiviral therapy by the drugmaker now in an early-stage US trial.

Albert Bourla said last month he was hopeful that a COVID-19 antiviral drug would be available by the end of the year. Pfizer has said the antiviral candidate showed potent activity against SARS-CoV-2, the virus that causes COVID-19, in lab studies.

"Right now we have very good reason to believe that we can be successful," Bourla told an economic forum in Athens via video conference, adding the first results on its efficacy would be available after the summer.

Confirmed deaths from COVID-19 in Colombia passed 80,000 on Friday with intensive care units almost full in the biggest cities, where large crowds have been gathering for weeks of anti-government protests.

Authorities warned this week that the demonstrations - initially called in opposition to a now-canceled tax reform but which have expanded to tackle inequality and police brutality - were set to prolong an already-devastating third wave of the epidemic. read more

The pressure on ICUs in the capital "is worrying," the government said late on Thursday, adding patients would be transferred by air to other cities.

ICU occupancy for COVID-19 patients in Bogota stands at 94 percent, according to local authorities. In Medellin and Cali, the rates are at 99 percent and 95 percent, respectively.

Brazil on Friday reported 2,211 more deaths from COVID-19, raising the national count to 432,628, the Ministry of Health said.

ALSO READ: Virus is deadlier in Brazil than India and no one knows why 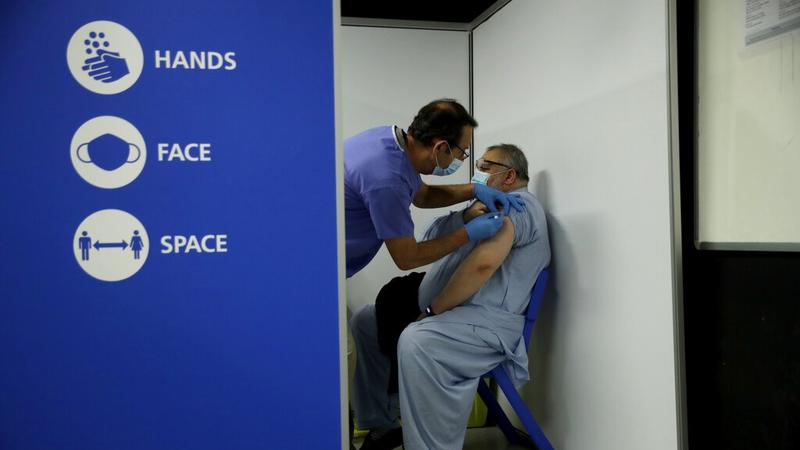 A man receives his second dose of the Pfizer coronavirus vaccine at a vaccine center in the Swaminarayan School in Neasden, north London on May 1, 2021. (MATT DUNHAM / AP)

Prime Minister Boris Johnson said on Friday Britain would accelerate its COVID-19 vaccination programme, to try to contain a fast-spreading variant first identified in India that could knock a re-opening of the economy off track.

The United Kingdom has delivered one of the world's fastest inoculation campaigns, giving a first shot to almost 70 percent of the adult population and a second to 36 percent, helping to reduce infection rates and deaths.

But the emergence of the B.1.617.2 variant in parts of northern England and London has prompted some scientists to call for the reopening to be delayed, and a rethink on the speed of the vaccine rollout.

Johnson said the government would accelerate remaining second doses to the over 50s and those clinically vulnerable to just eight weeks after the first dose, and would prioritise first doses for those eligible who had not yet come forward.

Even so, the spread of the variant could disrupt Britain's progress out of lockdown, making it more difficult to move to the final stage of a staggered reopening of the economy in June, he said.

Meanwhile, another 2,193 people in Britain have tested positive for COVID-19, bringing the total number of coronavirus cases in the country to 4,446,824, according to official figures released Friday.

Romanian Prime Minister Florin Citu said the government made a decision on Friday to gradually ease the country's coronavirus-related restrictions starting from Saturday.

As of Saturday, the night curfew will be lifted, and the mandatory mask rules will only be applied in closed public spaces and crowded open public spaces, including markets, public transport stations and workplace.

Meanwhile, restrictions on store opening hours will also be lifted, and the closing time of restaurants, bars and cafes will be extended from the current 9 pm to 12 am local time, said Citu.

He stressed that participants in outdoors activities must wear masks, have been fully vaccinated for over 10 days and have a negative RT-PCR or antigen test finished within specified time.

The pandemic situation has improved recently in Romania. The authorities attributed it to stricter control measures and intensified vaccination.

Health Minister Enrique Paris on Friday called on Chileans to maintain COVID-19 protective measures to prevent the spread of infections during this weekend's elections.

In a statement from the Ministry of Health, he said, "(We must) always maintain self-care measures, use a mask, wash hands with soap and water, use hand sanitizer, keep physical distance and, of course, carry your own blue pencil, since these are the most effective measures to avoid new infections."

Another 5,257 deaths are considered to be COVID-19 related, but not verified, according to the ministry.

Cuba registered the highest number of daily COVID-19 cases since March 2020, recording 1,277 infections in the last 24 hours, for a tally of 121,838 cases, the Ministry of Public Health said on Friday, reporting seven deaths as well, to total 785.

Havana continues to be the epicenter of the outbreak in the country, with 657 new daily cases reported in its 15 municipalities and accounts for more than half of all cases on the island.

Kenya will start administering the second dose of the AstraZeneca COVID-19 vaccine in the first week of June, the Ministry of Health said in a statement on Friday.

This followed the country's revision of the duration between the first and the second does from eight weeks to 12 weeks in line with the World Health Organization (WHO) recommendation late in April.

The ministry has revised the interval period for the administration of the AstraZeneca vaccine to 12 weeks. This means the country would begin administering the second dose of the vaccine in June," said the ministry amid a shortage of the jabs in Kenya following the crisis in India.

The ministry assured the public that efforts to acquire the COVID-19 vaccines are underway to ensure as many as eligible people are fully immunized in the shortest time possible, and that the entire adult population will be vaccinated by June 2022.

According to a statement by the Ministry of Health, the death toll rose to 9,092 with one new fatality during the last 24 hours, while 207 people are in intensive care units.

Ethiopia registered 453 new COVID-19 cases in the past 24 hours, taking the nationwide tally to 265,413 as of Friday evening, according to the country's Ministry of Health.

The ministry said 13 new deaths were reported, bringing the death toll to 3,964.