By Wu Yong in Shenyang and Zhang Xiaomin in Dalian, Liaoning 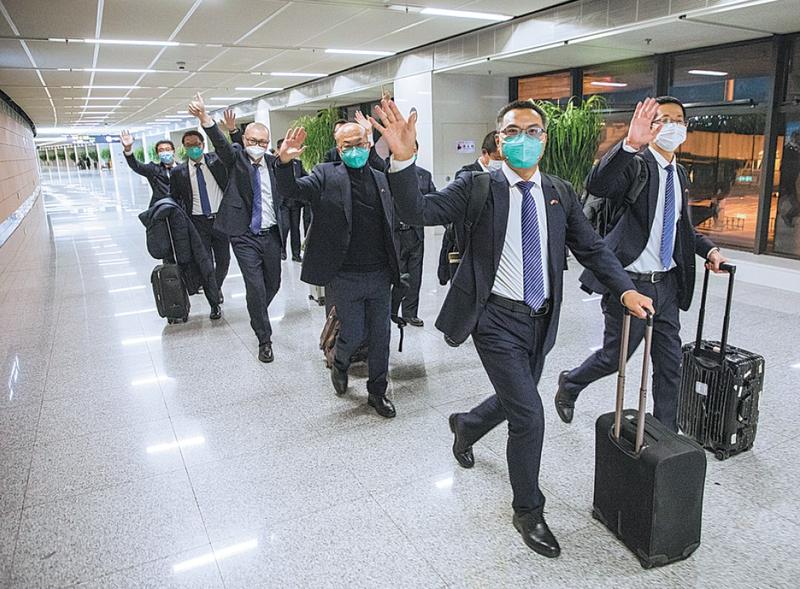 The members of the third squad of the China (Liaoning) medical aid team to Gambia return to Shenyang, Liaoning province, in January, after a 548-day work trip in the African country. (PHOTO PROVIDED TO CHINA DAILY)

The third squad of the China (Liaoning) medical aid team in Gambia completed its task, albeit six months later than planned because of the COVID-19 pandemic, and returned home safely at the beginning of this year.

Despite the risks posed by the pandemic, the medics stuck to their posts and made outstanding contributions to medical care in the African nation.

Since 1963, China has sent about 26,000 medical personnel to more than 70 countries and regions in Asia, Africa, Latin America, Europe and Oceania. They have treated about 280 million patients in total. Moreover, China has trained a large number of local medical personnel who will work as "Chinese medical teams that will never leave."

Take Liaoning for example. Data show that it has sent 99 groups of 2,417 medical professionals to Yemen, Kuwait, Albania, Gambia and four other countries in the past 55 years.

From 1966 to 2015, the province sent 88 groups of medical professionals to Yemen to work in 14 public hospitals.

"The work was not about me, but for the benefit of both countries. I was very honored to join teams and make a contribution to this glorious mission," said Taishi Kun, a 100-year-old doctor from Shenyang No. 4 People's Hospital, who joined many medical teams in the 1960s and '70s.

In March 2016, China and Gambia signed the Joint Communique of the People's Republic of China and the Islamic Republic of Gambia on the Restoration of Diplomatic Relations, which started medical and health cooperation.

Liaoning sent its first batch of medical professionals to Gambia in June 2017. They have created a new medical assistance model by integrating local public health commissions, medical teams and Gambia's health development strategy, according to Gao.

The provincial health commission has focused on the integration of medical assistance models and is striving to help Gambia's public health work.

Now, an obstetrics and gynecology center in Gambia can provide high-quality medical services for locals.

So far, Liaoning has sent four groups of long-stay medical teams to Gambia, and their outstanding contributions have won acclaim from the local government and people.

"Over the past five years, China and Gambia have been working to foster a strong friendship and add new momentum to building a China-Africa community with a shared future," said Ma Jianchun, China's ambassador to Gambia.

"Looking forward, we see a brighter future for China-Gambia cooperation. We believe that with the further development and deepening of our relationship, we will see more cooperation achievements materializing in Gambia, making positive contributions to economic development and the improvement of people's livelihoods in the country."

Chen Mo contributed to this story.