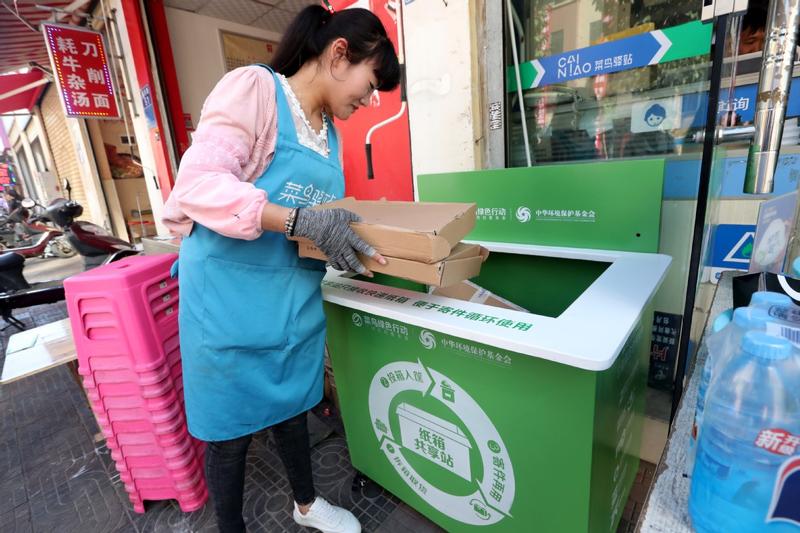 While the rapid development of express delivery services is making life in China easier and more convenient, the huge amounts of materials used for packaging are putting extensive pressure on the environment. In response to the nation's commitment to achieving carbon neutrality, leading couriers are adopting new measures to contribute, experts said.

By the end of last year, YTO Express had replaced more than 90 percent of its plastic woven bags with recyclable bags, and over 90 percent of its adhesive tapes used for sealing boxes have been slimmed down to minimize waste

The various sized boxes differ from ordinary ones as they contain no glue, metal staples or adhesive tape. What's more, they are sealed with special clips.

"The recyclable packing cases can be folded into flat cardboard for recycling or storage purposes. Although they cost more than conventional counterparts, they can be reused several times," said Li Changxiang, who is in charge of YTO Express's network service in Hainan.

By the end of last year, YTO Express had replaced more than 90 percent of its plastic woven bags with recyclable bags, and over 90 percent of its adhesive tapes used for sealing boxes have been slimmed down to minimize waste.

All these efforts are to make packaging greener and recyclable, which is also in line with China's commitment to peaking carbon dioxide emissions by 2030 and achieve carbon neutrality by 2060, experts said.

"China has become the world's greatest consumer of e-commerce parcels. There were more than 83 billion units of parcels delivered across the nation in 2020, and the figure is expected to further swell to 95 billion units this year," said Yang Daqing, a logistics industry expert.

Every year, express companies use substantial volumes of packaging materials including plastic bags, cardboard boxes, filling and adhesive tape, most of which are non-biodegradable and place major pressure on the environment, Yang said.

Each year, the nation's express courier industry consumes more than 9 million metric tons of paper waste and about 1.8 million tons of plastic waste, according to a Xinhua News Agency report.

The Chinese government is now promoting the express delivery industry to use green packaging as well as reduce package waste.

On Dec 14, eight central government departments, including the National Development and Reform Commission and the State Post Bureau, published a guideline that introduced measures such as offering incentives to businesses and setting unified standards for green packaging to ensure compliance among industry participants.

By 2022, the guideline set a goal of having 85 percent of products arriving at courier warehouses in a condition suitable for distribution.

As early as 2017, JD Logistics launched an end-to-end green and environmentally friendly plan to implement low carbon and energy saving results in various procedures including packaging, storage and transportation.

As of December, recyclable packages have been used a total of 110 million times in its green campaign.

In the meantime, new energy vehicles were put into operation in the past four years (2017-20) in more than 50 cities across the nation, allowing 120,000 tons of carbon dioxide emissions cuts annually.

As of December, recyclable packages have been used a total of 110 million times in its green campaign

As many as 10.58 million recyclable canvas sacks came into use at ZTO Express as of March. These innovative bags can be reused over 100 times and typically have a service life of 4-6 months. In the meantime, the express courier company has established 21,000 package waste recycling facilities throughout its network, said Qiu Dapeng, manager of the communications division at ZTO Express.

Likewise, Best Inc has launched a green logistics scheme throughout its business network including in operations, packaging and transport.

The express company has widely applied reusable bags embedded with chips at its major transit centers. In comparison with conventional woven bags that can only be used twice at most, the traceable bags can be reused over 40 times, said Wang Bo, director of network operations at Best Express.

Best had used a total of 9 million such bags, and their accumulated usage counts reached 280 million times.

"Green logistics is backed by the enhancement of technology, efficiency and operational capability,"Wang said.

The advancement of green packaging is taking place throughout the complete express delivery service process. Therefore, the industry could not go green without the participation of all related parties.

There are still some unsolved problems, including the supply of green packaging materials, difficulties in purchasing green biodegradable packing in Hainan and insufficient support in recycling packaging cases from end users

Authorities have established clear packaging requirements for both courier service providers and clients.

In accordance with new rules on parcel packaging that came into effect in March, courier companies should purchase packaging materials that meet government set standards and prioritize materials that can be reused or are easy to recycle, whilst clients of express delivery services should also support green packaging and comply with the new rules. Clients should also avoid using materials that are not in line with relative laws and regulations, said Xinhua, citing Guan Aiguang, an official with the State Post Bureau.

Wan Yuyang, a deputy general manager with YTO Express's network management in Hainan, said there are still some unsolved problems, including the supply of green packaging materials, difficulties in purchasing green biodegradable packing in Hainan and insufficient support in recycling packaging cases from end users.

"We are trying to solve the hardships in recycling with technologies such as chips inside reusable packing boxes so that we can trace their locations and recycle them accordingly," Wan said.

Experts also raised concerns regarding the recycling of packaging materials. Currently, about 80 percent of paper packaging waste from logistics can be reused. However, 99 percent of the plastic packaging waste cannot be effectively recycled due to low recall value.

"Hard-to-recycle plastics are often discarded in landfills and waterways without consideration for their value in other applications. The importance of plastics must be an impetus for brand owners, recyclers and other value chain partners to prevent it from being lost as waste," said Bambang Candra, Asia-Pacific commercial vice-president of packaging and specialty plastics at Dow.

China's courier sector handled more than 21.93 billion parcels in the first quarter this year, up 75 percent year-on-year, or an average of about 240 million parcels on daily basis, according to the State Post Bureau.