HK Labour and Welfare Bureau: No discrimination in FDH tests 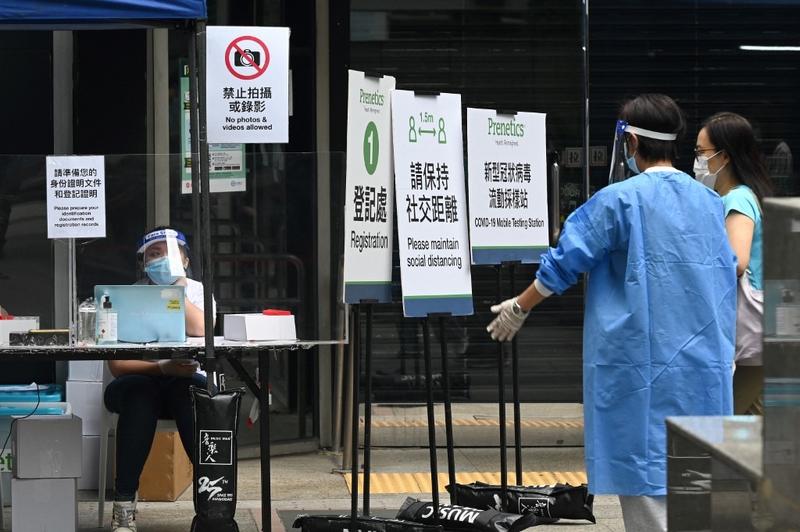 A woman (right) visits a COVID-19 testing center set up outside the immigration headquarters in Hong Kong on April 24, 2021, after a returning Philippine domestic helper tested positive for COVID-19 after completing a 21-day quarantine and later visited the building. (PETER PARKS / AFP)

HONG KONG - The Labour and Welfare Bureau on Saturday said there was no discrimination in the decision to require foreign domestic helpers in Hong Kong who were not yet fully vaccinated to get tested for COVID-19.

In a statement issued late on Saturday night, the bureau noted that the decision to require FDHs to get tested by May 9 was reached after recent incidents of FDHs testing positive for the virus mutant strain N501Y.

“There is no discrimination on race or status,” it added.

The bureau noted that the source of infection in these recent cases was unknown and that compulsory testing is an important risk-based measure to adopted to address the evolving situation of the pandemic and is supported by public health experts.

“The FDH population is significant at about 370,000. Their job mainly involves taking care of family members, including the elderly and children,” the bureau said.

“If an FDH is infected with the virus, the employer's family members may be infected. In addition, as FDHs have regular social gatherings, coupled with the high transmissibility of the N501Y mutant strain, any infection involving FDHs might result in cross-household infections,” it added.

Government data showed that over 34,000 FDHs, equivalent to less than 10 percent of the total number of FDHs in Hong Kong, had undergone voluntary testing at community testing centers since mid-2020.

The bureau said the government was also appealing to all FDHs to receive vaccination as soon as possible to protect their own health and that of their employers' family and others, and to avoid being subject to any regular testing in the future.

Regarding the arrangement of requiring FDHs to receive recognized vaccines when applying for contract renewal in the future, the Labour Department and the Immigration Department are working out the relevant details, the bureau said.

If an FDH chooses to work in Hong Kong, he or she may get vaccinated. If unable to do so due to health reasons, the FDH may be considered for exemption from the relevant requirement, it added.

The bureau also noted that under the Indemnity Fund for Adverse Events Following Immunization with COVID-19 Vaccines, an FDH, like other Hong Kong people, can apply for financial support from the indemnity fund if he or she suffers unexpected serious adverse events associated with the vaccine.

The relevant departments will make an announcement after confirming the details for the above arrangements, it added.

In a separate statement issued on Sunday morning, the Food and Health Bureau said those who have completed the COVID-19 vaccination course of two doses were exempted from the tests.

“Although the sheer number of FDHs in Hong Kong would impose challenges to the local testing capacity in the short term, we need to keep up our efforts in testing high-risk, high-exposure and high transmissibility risk groups in order to cut the latent transmission chains in the community as early as possible,” the bureau said.

“The government would like to express gratitude to all those who received test today, including FDHs, for their patience and understanding,” it added.