Hong Kong retail is overdependent on mainland visitors. Hainan will become a free port in 2025 and thus a competing shopping destination. Can HK leverage the Greater Bay Area of 72 million people and a US$1.68 trillion GDP? Luo Weiteng reports from Hong Kong.

The upside for Hong Kong's e-commerce potential is high — a large portion of the population has yet to make an online purchase. Four in 10 of the 7.5 million residents do not use e-commerce, according to the JP Morgan 2020 E-commerce Payments Trends Report. Data from market researcher Euromonitor International indicates that COVID-19 speeded up digital transactions. Annual e-commerce sales in Hong Kong grew by 27 percent in 2020. About 13 percent of all retail transactions are online. The Hong Kong e-commerce market size was HK$49 billion (US$6.31 billion) in 2020, of which about 75 percent was purchased on local retail sites, while 25 percent went to cross-border e-commerce sites. 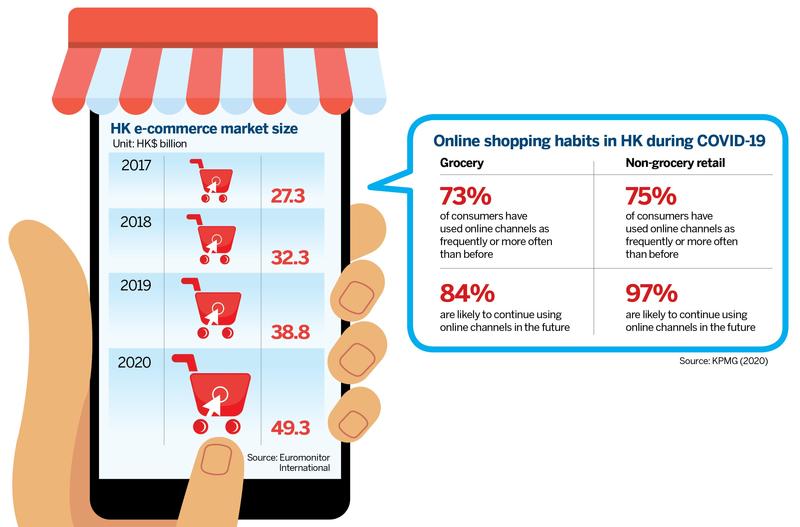 “The pandemic has introduced e-commerce to many local consumers for the first time,” said Pedro Yip, partner and head of retail and consumer goods practice, Greater China, at US-based consulting firm Oliver Wyman. According to Oliver Wyman, e-commerce demand in Hong Kong has doubled in 2020, with over 2 million local consumers making online purchases.

The COVID-19 pandemic prompted more consumers to buy groceries and consumer goods online. They are unlikely to revert back because of the convenience and exclusive promotions with online shopping, said Emily Leung, senior analyst at Euromonitor International. E-commerce is forecast to grow at a 13 percent compounded annual growth rate for the next five years.

Euromonitor International expects tourism to rebound once borders reopen. The local retail sector is highly tourism-dependent. E-commerce in Hong Kong is gaining traction as major brands and shopping platforms expanded through the pandemic and tourist lockout.

Yip categorized three types of retailers from an e-commerce perspective: those who embraced e-commerce early (and are now reaping the benefits); those who haven’t invested in e-commerce; and those who implemented e-commerce poorly, thereby being unable to fully leverage it.

“Many Hong Kong retailers are in the last two categories: They are too focused on return on investment and do not invest until they see the demand,” he said. “It is often too late when the demand is proven. They would face an uphill battle.” In addition, those with effective e-commerce infrastructure received orders beyond their fulfilment capacity, taking business away from those without online channels, Yip added. 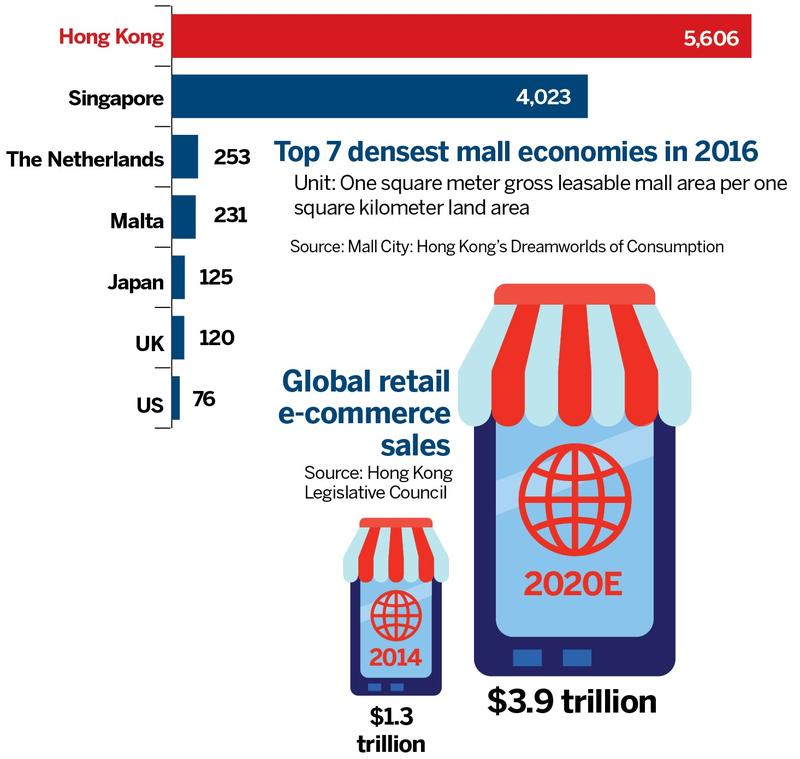 According to retailers surveyed, Mavis Hui, Hong Kong and Chinese mainland consumer sector analyst at DBS Hong Kong, observed that pre-pandemic travelers’ tourism spending on tourism-centric merchandise could contribute 40 to 50 percent of a single store’s sales. For stores located in core shopping districts like Tsim Sha Tsui, that could exceed 70 percent. Most tourist spending is not e-commerce based; they are in-shop purchases.

Hui said the robust growth in e-commerce as a percentage of total retail in Hong Kong reflects the reduced base from loss of tourism-driven retail sales, not necessarily a significant local spike in e-commerce. However, the number of hours that people spend online has risen from an average of six hours to over seven hours per day, which is an encouraging indicator.

“E-commerce is here to stay for locals, but unlikely to hit the high penetration in Europe, the United States, or the Chinese mainland, for years to come,” Yip said. “The future of the retail sector in Hong Kong is dependent on the number of tourists the city can attract when the pandemic ends. This requires close collaboration of local government, retailers, and the hospitality industry.”

Hong Kong Tourism Board data recorded fewer than 10,000 arrivals in Hong Kong over the first two months of 2021, down 99.7 percent against the same period last year. In 2020, total visitor arrivals from the mainland plummeted to 2.7 million — the 1998 level.

While some operators in the retail and tourism sectors hold high hopes for vaccinations hastening the reopening of borders to resume travel, Hui does not see a very speedy post-COVID tourism recovery to prior levels.

Competition from other tax-friendly shopping destinations such as Hainan, coupled with the dramatic decline of mainland tourist visits, further underscored the danger of overreliance on the mainland factor, Cheng said.

Hainan’s free trade status will be better established by 2025, as an alternative to Hong Kong for mainland travelers. Macao also once became a preferred destination in late-2019, when social unrest in Hong Kong kept tourists away, Hui added. 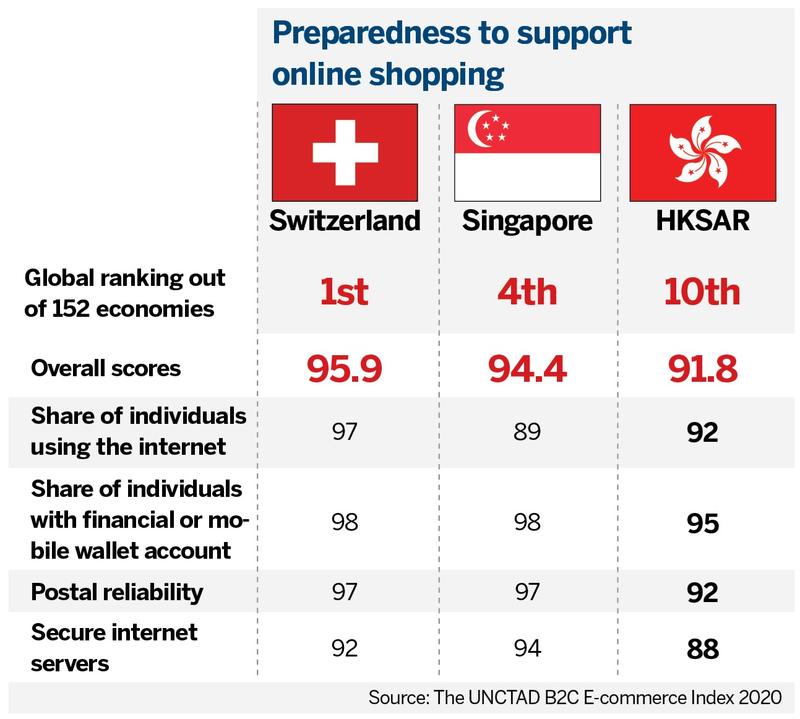 On June 1, Chinese authorities released the Overall Plan for the Construction of Hainan Free Trade Port. The plan lays out a four-stage timeline for achieving the development. Authorities plan to have the free trade port basically in place by 2025.

Cheng calls for a major shift in retailers’ operating strategies, toward e-commerce and online-to-offline integration, coupled with timely and targeted government support for structural transformation of the retail industry. “The COVID-19 lesson serves to remind Hong Kong retailers that they cannot afford to rely on a passive, single-channel revenue model, built on the mainland travelers,” he said.

Cheng urges traditional retailers to rebalance their portfolios and strengthen capabilities for cross-border e-commerce, to serve overseas markets and customers, and to diversify their geographical exposure.

Retail sales jumped 30 percent in February to HK$29.5 billion due largely to the timing of the Lunar New Year, breaking 24 consecutive months of decline, according to the Census and Statistics Department. Although the surge was the biggest since February 2010, the government spokesman warned that the retail sector will remain disadvantaged in the near term as “inbound tourism remains frozen”.

Macao has lifted the entry ban in a progressive manner since August, but its tourism figures have not matched the pre-pandemic level. “Everything may gradually return to a more normal level starting in 2022 — when local e-commerce could post a high single digit to teens’ growth, while O2O acceleration could be a wild card too,” Hui said.

The Guangdong-Hong Kong-Macao Greater Bay Area has all the elements required for Hong Kong retailers to expand into and diversify their online and offline customer bases, Cheng said.

Home to a combined population of over 72 million, roughly twice that of Canada, with a GDP of US$1.68 trillion, the Greater Bay Area is comparable to the Tokyo Bay market.

This larger consumer base is compatible with the country’s “internal circulation” strategy, to leverage the most productive, vibrant regions, added PwC’s Cheng.

Online retail merchants can enjoy reduced cross-border indirect taxes, free from tariff, with 30 percent off for import value-added tax and import consumption tax, as well as faster entry into the mainland market.

However, Dai Xianchi, associate professor in the department of marketing at the Chinese University of Hong Kong, listed two major challenges for Hong Kong merchants to serve the Greater Bay Area in e-commerce and retail.

“The first is the infrastructure in logistics and law. Systematic work needs to be done to streamline the logistics system and to provide a matching legal environment for the same business to serve the entire Greater Bay Area,” Dai said. He said he believes the second has to do with a mindset change, where there is a pressing need for Hong Kong managers to understand mainland consumers and businesses, on top of their own local market mindset.

Dai agrees with Peter Wong, senior analyst at Euromonitor International, for upgrades to logistics infrastructure, and to provide government regulatory support for Hong Kong e-commerce and retail companies, whose current local focus leaves them underdeveloped as far as the necessary interfaces for cross-border e-commerce and delivery platforms.

While Taobao and other mainland e-commerce platforms have been servicing Hong Kong and Macao buyers efficiently for years, the reverse trade for high quality Hong Kong products via e-commerce delivery has not developed. Mainland shoppers come as visitors for direct purchase at local stores.

Wong suggested that government authorities on either side should align cross-border regulatory measures to facilitate the movement of products. The physical immigration and customs checkpoints between mainland cities plus Hong Kong and Macao restricts the movements of goods, making it impossible for a true Greater Bay Area market to operate. Wong advocates free border passage for certified Hong Kong and Macao products.