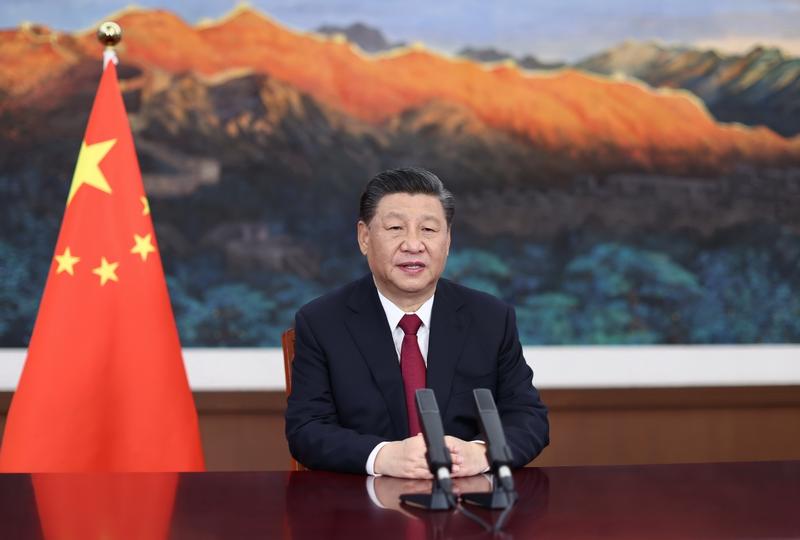 BEIJING - China will never seek hegemony, expansion, or a sphere of influence no matter how strong it may grow, President Xi Jinping said Tuesday.

Nor will China ever engage in an arms race, Xi added.

Xi made the remarks while delivering a keynote speech via video at the opening ceremony of the Boao Forum for Asia Annual Conference 2021.

The COVID-19 pandemic has made it all the more clear to people around the world that we must reject the cold-war and zero-sum mentality and oppose a new 'Cold War' and ideological confrontation in whatever forms.

China will develop friendship and cooperation with other countries on the basis of the Five Principles of Peaceful Coexistence, and promote a new type of international relations, Xi said.

Justice is needed in today's world, not hegemony, he said.

"The COVID-19 pandemic has made it all the more clear to people around the world that we must reject the cold-war and zero-sum mentality and oppose a new 'Cold War' and ideological confrontation in whatever forms," Xi said.

The principles of equality, mutual respect and mutual trust must be put front and center in state-to-state relations, Xi continued.

"Bossing others around or meddling in others' internal affairs would not get one any support," he said.

"World affairs should be handled through extensive consultation, and the future of the world should be decided by all countries working together," Xi said.

"We must not let the rules set by one or a few countries be imposed on others, or allow unilateralism pursued by certain countries to set the pace for the whole world," Xi stressed.

Big countries should behave in a manner befitting their status and with a greater sense of responsibility, he added.

The Chinese president said that 2021 marks the 20th anniversary of the Boao Forum for Asia (BFA).

The forum has borne witness to the extraordinary journey of China, of Asia and of the world, and has exerted a significant influence in boosting development in Asia and beyond, Xi said.

Xi underscored the significance of the theme of the forum, which he said was convened against "a very special background".

The theme - A World in Change: Join Hands to Strengthen Global Governance and Advance Belt and Road Cooperation - is most opportune and relevant under the current circumstances, Xi said.

China has achieved progress and development in tandem with the rest of Asia and the world, the president said.

As an important member of the Asian family, China has kept deepening reform and opening-up while promoting regional cooperation, Xi said

As an important member of the Asian family, China has kept deepening reform and opening-up while promoting regional cooperation, Xi said.

All are welcome to share in the vast opportunities of the Chinese market, Xi said.

China will take an active part in multilateral cooperation on trade and investment, fully implement the Foreign Investment Law and its supporting rules and regulations, and cut further the negative list on foreign investment, said Xi.

China will continue to develop the Hainan Free Trade Port and develop new systems for a higher-standard open economy, he added.

In his speech, Xi stressed following the principles of extensive consultation, joint contribution and shared benefits, and upholding true multilateralism.

Economic globalization is showing renewed resilience, and the call for upholding multilateralism and enhancing communication and coordination has grown stronger, Xi noted.

In the age of economic globalization, attempts to "erect walls" or "decouple" run counter to the law of economics and market principles, and would hurt others' interests without benefiting oneself, Xi said.

Xi called for building an open world economy, saying that openness is essential for development and progress, and holds the key to post-COVID economic recovery

The Chinese president called for building an open world economy, saying that openness is essential for development and progress, and holds the key to post-COVID economic recovery.

He called for turning the fruits of scientific and technological innovation into greater benefits for people in all countries.

Efforts must be made to boost the digital economy, and step up exchanges and cooperation in areas including artificial intelligence, biomedicine and modern energy, Xi said.

The Belt and Road Initiative (BRI) is a public road open to all, not a private path owned by one single party, the Chinese president said.

"All interested countries are welcome aboard to take part in the cooperation and share in its benefits," he said.

Meanwhile, China will work with all willing participants to build the BRI into a pathway to poverty alleviation and growth.

Xi said that the key role of the World Health Organization (WHO) must be given full play in the ongoing fight against COVID-19.

"We must put people and their lives above anything else, scale up information sharing and collective efforts, and enhance public health and medical cooperation," he said.

Xi called for efforts to bolster international cooperation on the research and development, production and distribution of vaccines.

He stressed that efforts should be made to ensure that everyone in the world can access and afford the vaccines they need.

Meanwhile, Xi stressed the importance of advancing international cooperation on climate change and doing more to implement the Paris Agreement.

“The principle of common but differentiated responsibilities must be upheld, and concerns of developing countries on capital, technology and capacity building must be addressed," Xi said.

Conference on Dialogue of Asian Civilizations

China will host the second Conference on Dialogue of Asian Civilizations once the pandemic gets under control.

It will be part of China's active efforts to promote inter-civilization dialogue in Asia and beyond, Xi noted.