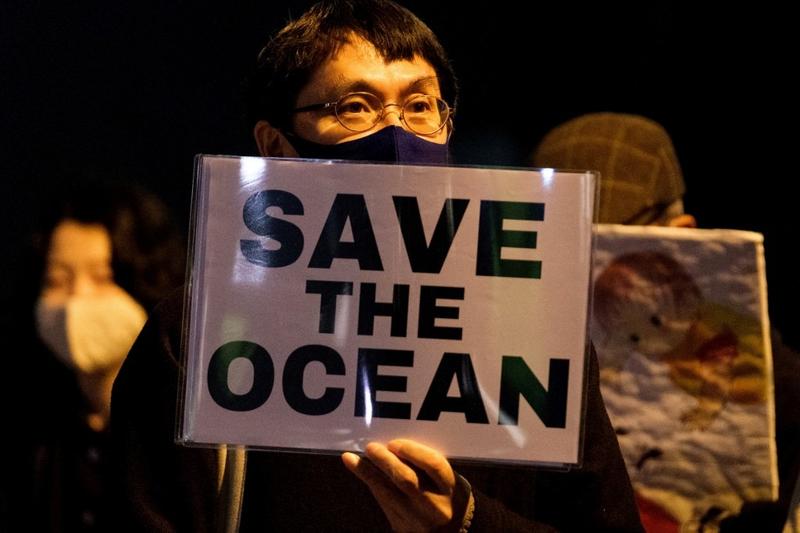 A protestor holds a slogan during a rally against the Japanese government's decision to release treated water from the stricken Fukushima Daiichi nuclear plant into the sea, outside of the prime minister's office in Tokyo on April 13, 2021. (YUKI IWAMURA / AFP)

BEIJING - China has expressed "grave concern" over Japan's decision to dump nuclear wastewater into the sea and urges the Japanese government to take a responsible attitude toward its own people and the international community, the Ministry of Ecology and Environment said.

"As a close neighbor of Japan and a stakeholder, we are seriously concerned about this decision," said a spokesperson with the ministry.

It is hoped that the Japanese government will conduct further in-depth study and deliberation of various means of safe disposal and discharge paths, release information in a comprehensive and timely manner, and make prudent decisions after full consultation with stakeholders, the spokesperson said.

The ministry also said there is a fundamental difference between the wastewater from the Fukushima nuclear plant after the accident and the liquid effluents from the normal operation of nuclear power plants in terms of their source, radionuclide type and difficulty of processing.

The ministry said it will closely follow the situation, carefully assess the possible impact on the marine ecology, strengthen the monitoring of marine radiation, and ensure the safety of China's marine environment.

READ MORE: The world must pressure Japan to change decision on Fukushima water