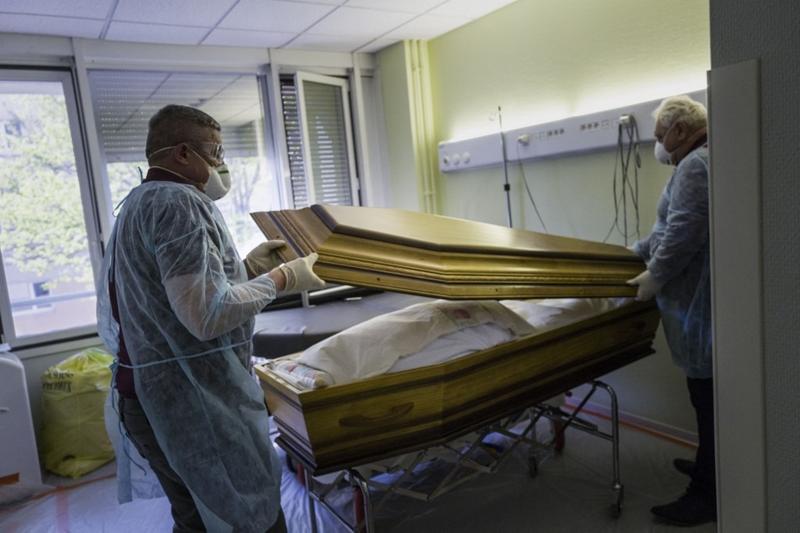 In this photo taken on April 5, 2020, employees of the Lantz funeral company close the coffin of a victim of the Covid-19 at an hospital in Mulhouse, France. (PHOTO  / AFP)

SAO PAULO /  BUENOS AIRES / HAVANA / OTTAWA - The relentless pace of death from the global COVID-19 pandemic is continuing unabated despite global vaccination efforts, and is now being increasingly borne by the poorest places in the world.

More than 3 million lives have been lost as a result of the novel coronavirus that emerged in 2019, with the latest one million recorded deaths coming even faster than the first two. It took about 8.5 months after the initial fatality to mark the first million, and just another 3.5 months to reach the second million. 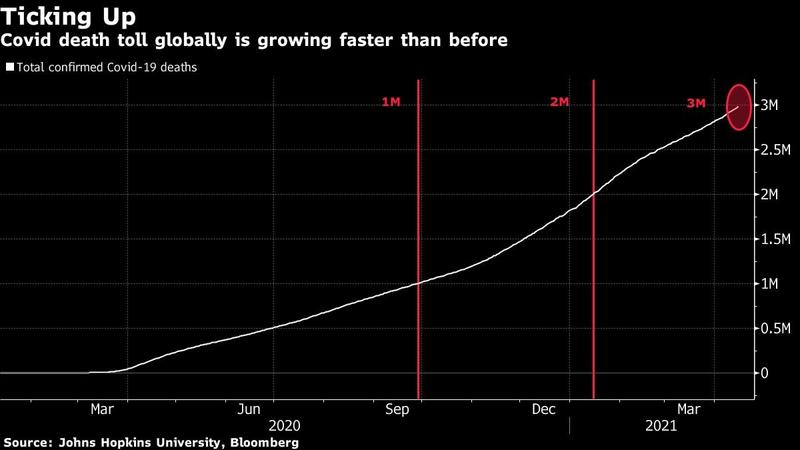 The death toll passed 3 million on Saturday, according to Johns Hopkins University data, only about three months since crossing the 2 million mark on Jan. 15. The shortening intervals, coupled with the increasing number of new cases worldwide, is dealing a blow to hopes that the end of the pandemic is in sight with the widespread deployment of vaccines.

Just five places account for about half of the last million deaths. The US alone claimed 18 percent of the world total, still the highest country share

The real death toll from COVID-19 is likely far higher than three million, due to under and patchy reporting around the world.

The grim milestone underscores a widening disparity in combating the pandemic, which parallels the gap in vaccine access. While mortality rates have largely slowed in the US and parts of Europe thanks to vaccine rollouts that promise a return to some semblance of a normal life, the developing world - Brazil in particular - is shouldering a rising death toll.

Just five places account for about half of the last million deaths. The US alone claimed 18 percent of the world total, still the highest country share. 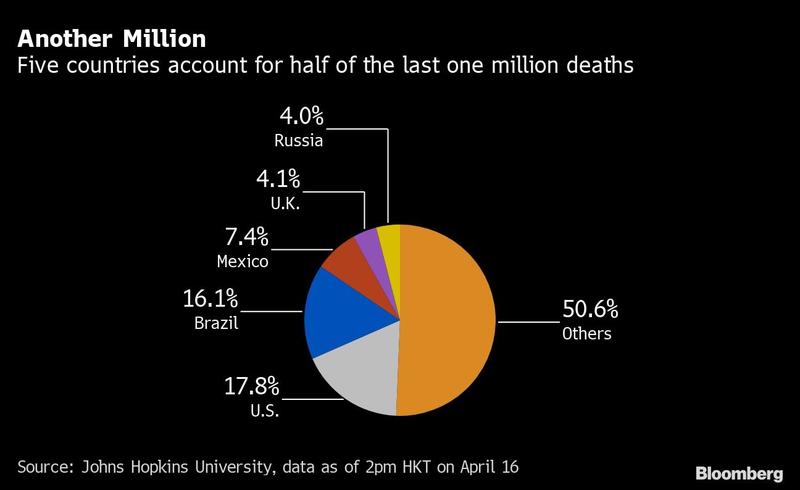 But the ground is shifting. The mortality burden is growing in less wealthy parts of the world, including those that are struggling to access vaccines. Among the last million fatalities, Brazil’s share grew by 9.5 percentage points compared to the previous million deaths, followed by Mexico and Peru.

Other countries have reduced their share of the last million fatalities, with India, Iran and Argentina dropping the most. Developed countries from Italy and the US to France and Belgium also had a smaller share in the new death toll compared to the previous million.

The findings underscore the need to get immunizations out to the world, public health officials said. About 40 percent of the Covid-19 vaccines administered have gone to people in 27 wealthy nations that account for just 11% of the world’s population, according to the Bloomberg Vaccine Tracker.

Former Peruvian president Martín Vizcarra has been banned from holding public office for 10 years in a unanimous vote by the country’s congress after he allegedly jumped the queue to receive a COVID-19 vaccine.

Vizcarra was found guilty of influence peddling, collusion and making false declarations in relation to Peru's VIP Vaccines scandal which saw scores of ministers and public officials receive vaccines before they were publicly available in the country.

Congress approved his temporary banning from public office by 86 votes in favour and zero against.

Both former ministers received the vaccine and resigned during the subsequent scandal. However, all three have denied having used their positions to obtain early access to vaccines.

Moderna Inc said on Friday a shortfall in COVID-19 vaccine doses from its European suppliers will delay deliveries to countries including Canada and Britain, but shipments to the European Union and Switzerland are on track.

The drugmaker will deliver about 650,000 doses by the end of April, not the expected 1.2 million, Canada's Procurement Minister Anita Anand said.

Moreover, one million to two million Moderna doses of the 12.3 million doses slated for the second quarter would be delayed until the third. read more

Moderna officials pegged issues on ramp-up of its vaccine manufacturing supply chain, which includes drug contract manufacturer Lonza. The Swiss company is under pressure to begin operations at three new facilities where it makes active ingredients for Moderna's mRNA vaccine.

Brazil asked women on Friday to delay getting pregnant until the worst of the pandemic passes, saying the virus variant that is devastating the South American country appears to affect expectant mothers more than earlier versions of the coronavirus.

The recommendation comes as Brazil continues to be one of the global epicenters of the pandemic, with more Brazilians dying of the virus each day than anywhere else in the world.

Hospitals are buckling under the strain and stocks of drugs needed for intubating severely ill patients are running perilously low, with Brazil turning to international partners for help with emergency supplies.

“If it’s possible, delay pregnancy a little until a better moment,” Health Ministry official Raphael Parente said during a news conference on Friday.

He said the recommendation was partly due to the stress on the health system but also due to the more easily transmissible Brazilian variant known as P.1.

Previously, COVID-19 cases during pregnancy were focused on the final trimester and birth, whereas lately there have been more serious cases in the second and occasionally first trimester, he said.

Prime Minister Mario Draghi said many business activities in much of Italy can resume starting April 26 in a bet on an economic rebound fueled by what he called “good debt.”

Government and regional leaders on Friday decided to ease Italy’s lockdown, reintroducing so-called yellow risk areas where restaurants with open-air seating can reopen and residents have more freedom of movement, Draghi told reporters in Rome. All schools will reopen in medium-risk and lower-risk areas as the coronavirus contagion slows.

Chancellor Angela Merkel got her first shot of the AstraZeneca vaccine on Friday as Germany’s immunization drive continued to gather pace after a sluggish start.

Vice Chancellor and Finance Minister Olaf Scholz was also due to get the AstraZeneca shot Friday, with both opting for the company’s vaccine despite possible links to rare blood clots that have led to its use being limited in some countries, including Germany.

Moderna said it will deliver fewer COVID-19 vaccines than planned to the UK, Canada and other countries this quarter due to a shortfall in doses in its European supply chain.

Deliveries to the UK will be reduced from this month, just days after the vaccine was rolled out in Britain, which will affect the overall number of doses previously expected to be supplied by the end of June. Moderna is working with Lonza Group AG to make the shots in Europe.

The US has administered 200 million doses of COVID-19 vaccine, a White House official said Friday. Just under 40 percent of Americans have had at least one dose, and about a quarter have completed the one- and two-dose vaccinations.

The vaccine rollout has been accelerating as supply increases, with the US giving shots to about 1 percent of the population every day, according to the Bloomberg Vaccine Tracker. It took the U.S. 89 days to administer the first 100 million doses, a milestone reached on March 12. The second 100 million has come in just 36 days.

US President Joe Biden’s administration is allocating US$1.7 billion in funding to track the spread of COVID-19 variants, which are proving dangerous as they spread quickly and risk dragging out the pandemic.

The announcement, with funding from the aid package Biden signed a month ago, comes as mutations of the virus fuel new outbreaks across the US -- especially in the upper Midwest.

Hospital beds in the US filled up with COVID-19 patients this week to the highest level in almost six weeks, according to Health and Human Services Department data. Michigan reported the highest share of occupied beds with 20.1%, followed by Maryland at 15.6 percent.

Rare blood clots and high platelet counts after taking AstraZeneca Plc’s vaccine led to death in about 40% of 39 identified cases, according to an editorial in the New England Journal of Medicine.

Most of the reports were women younger than age 50, the editorial said. The authors called for more study of whether certain population groups would be more suitable for certain Covid vaccines.

France confirmed Friday that some cultural venues and outdoor dining will start reopening in mid-May. The country is currently under national lockdown as hospital intensive care unit capacity hovers at 117%. Another The 36,442 new cases were reported on Friday, while deaths rose by 331 to 100,404.

Anyone attending one of the large-scale public events the UK government is planning in the weeks ahead won’t have to wear a face mask but will have to show evidence of a negative Covid-19 test, the Telegraph reported.

Attendees will also have to take a PCR test before the event and again five days later as part of the government’s plan to ensure any transmission of the virus is properly monitored.

Global fatalities from COVID-19 are nearing 3 million. The relentless pace of death continues unabated despite vaccination efforts and is increasingly borne by the world’s poorest places.

The current death toll is 2.99 million, according to Johns Hopkins University data, only about three months since it crossed the 2 million mark on Jan. 15. It took about 8.5 months after the initial fatality in China to mark the first million, and just another 3.5 months to reach the second million.

The number of new COVID-19 cases per week worldwide has nearly doubled over the past two months, approaching the highest infection rate seen so far during the pandemic, the World Health Organization (WHO) said on Friday.

The previous most daily cases were recorded at 27,001 on Tuesday.

New mobility restrictions went into effect in the Metropolitan Area of Buenos Aires on Friday, including the suspension of social, cultural, sports, religious and recreational activities in closed places, store closures at 7:00 p.m. local time and the halt of face-to-face classes.

READ MORE: Virus is deadlier in Brazil than India and no one knows why

Ontario with a population of 14 million, has been under a province-wide lockdown for two weeks and stay-at-home order for one week.

The Canadian Medical Association (CMA) on Friday urged the Canadian government to take unprecedented measures to stem the COVID-19 spread across the country amid a new surge of coronavirus cases.

"As the third wave of the pandemic wreaks havoc on the healthcare and public health systems, healthcare providers, and patients, we are at a critical juncture where a truly national approach to combatting COVID-19 will make the difference between more or fewer lives saved," Ann Collins, president of the CMA, said in a statement. "This country must come together to help support provinces most severely impacted."

Tunisian Health Ministry on Friday reported 2,401 new COVID-19 cases, raising the total number of infections in the country to 281,777.

The death toll from the virus rose by 86 to 9,639 in Tunisia, the ministry said in a statement.

The number of hospitalized COVID-19 patients in the North African country reached 2,311, including 457 in intensive care units, while the total number of recoveries reached 232,643, it said.

A total of 1,215,518 lab tests have been carried out in Tunisia so far, said the ministry.

Chilean Health Minister Enrique Paris noted that restrictive measures "are allowing us to stop the rate of increase of new cases in some regions of the country."

In the last 14 days, Chile has seen a 4 percent increase in COVID-19 cases.

Cuba recorded nine more COVID-19 deaths in the last day, bringing its death toll to 500 since the beginning of the pandemic on the island, the Ministry of Public Health said on Friday.

Havana registered 567 cases, with an incidence rate of 363.6 per 100,000 inhabitants, the highest on the island, according to the ministry.

Authorities are maintaining restrictive health measures in the capital that include limiting overnight mobility, as well as severe fines for those who do not wear masks or wear them incorrectly.

Since January, Cuba has been facing a new wave of COVID-19 infections, which has forced the re-application of measures such as the suspension of the school year and the closure of public places throughout the country.