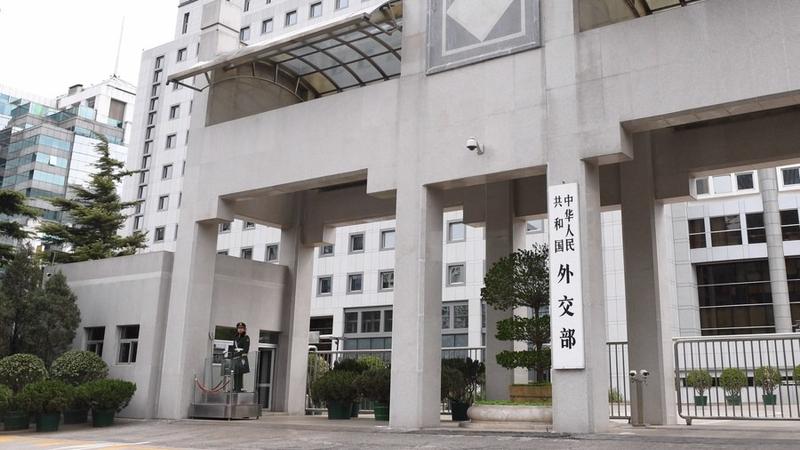 File photo taken on April 6, 2018 shows the Ministry of Foreign Affairs of the People's Republic of China in Beijing, capital of China. (LI HE/XINHUA)

BEIJING - China on Friday told Japan and the United States to avoid moves that interfere in China's internal affairs and undermine China's interests, and refrain from forming a clique targeting China.

Chinese Foreign Ministry spokesperson Zhao Lijian made the remarks at a daily news briefing when asked to comment on media reports that Japanese and US leaders are expected to mention issues including the Taiwan Straits during their talks.

Zhao said China has expressed grave concern to the US and Japan over their negative moves including collusion against China following the Japanese leader's visit to the US.

Chinese Foreign Ministry spokesperson Zhao Lijian pointed out that China-US and China-Japan relations both stand at an important juncture, and the world is watching closely what signals the visit will send

He pointed out that China-US and China-Japan relations both stand at an important juncture, and the world is watching closely what signals the visit will send.

"China has no problem with the development of normal bilateral ties between the US and Japan, but this relationship should be conducive to enhancing mutual understanding and trust among regional countries and peace and stability in the Asia Pacific, and should not target any third party or undermine third party interests," Zhao said.

China's position on Taiwan, Hong Kong, the South China Sea and the Diaoyu Islands is consistent and clear, he said. "Our determination and resolve to safeguard national sovereignty, security and development interests are rock solid. China will make necessary reactions as the situation evolves."

ALSO READ: China is not Japan, US should know that

The Diaoyu Island and its affiliated islands are China's inherent territory. China is firmly resolved and determined to safeguard its territorial sovereignty and will resolutely respond to Japan's illegal actions that violate China's sovereignty, he said.

"We once again seriously urge Japan to abide by the four-point principled consensus, strengthen internal discipline and avoid deterioration and escalation of the situation," said Zhao.