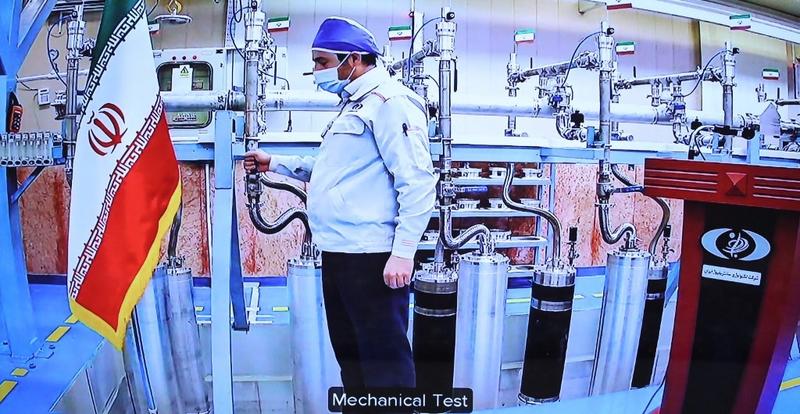 A handout picture provided by the Iranian presidential office on April 10, 2021, shows a grab of a videoconference screen of an enginere inside Iran's Natanz uranium enrichment plant, shown during a ceremony headed by the country's president on Iran's National Nuclear Technology Day, in the capital Tehran. (PHOTO / AFP)

VIENNA - Iran and global powers resumed talks on Thursday to rescue the 2015 nuclear deal in an effort potentially complicated by Tehran's decision to ramp up uranium enrichment and what it called Israeli sabotage at a nuclear site.

Casting a shadow over the Vienna talks, Tehran on Tuesday announced its decision to enrich uranium at 60 percent purity, a big step closer to the 90 percent that is weapons-grade material, in response to an explosion at its key Natanz facility on Sunday.

Casting a shadow over the Vienna talks, Tehran on Tuesday announced its decision to enrich uranium at 60 percent purity, a big step closer to the 90 percent that is weapons-grade material, in response to an explosion at its key Natanz facility on Sunday

Calling the move "provocative", the United States and the European parties to the deal warned that Tehran's enrichment move was contrary to efforts to revive the accord abandoned by Washington three years ago.

Tehran's refusal to hold direct talks with its old adversary the United States forced European intermediaries to shuttle between separate hotels in Vienna last week when Iran and the other signatories held what they described as a first round of “constructive” talks to salvage the pact.

"Don't worry about Iran. We have always remained committed to our obligations," Rouhani said in a televised cabinet meeting on Thursday.

"Even today, if we wish, we can enrich uranium at 90 percent purity. But we are not seeking a nuclear bomb ... If others return to full compliance with the deal ... we will stop 60 percent and 20 percent enrichment."

The 2015 deal was designed to make it harder for Iran to develop an atomic bomb in return for lifting sanctions.

Highlighting Western concerns, a senior diplomat said that while the desire was to make progress, Iran's latest violation could not be ignored and made efforts to achieve a breakthrough before the June 18 Iranian presidential election harder.

"The seriousness of Iran's latest decisions has hurt this process and raised tensions," said the senior Western diplomat.

"We will have to see how in the coming days we address these violations with the will to press ahead in the talks." The deal's remaining parties - Iran, Britain, China, France, Germany and Russia - have agreed to form two expert-level groups whose job is to marry lists of sanctions that the United States could lift with nuclear obligations Iran should meet.

A delegate at the talks said events in Natanz should not distract, and that this round needed to focus on what the Americans were actually prepared to do. "They still have not said what they mean," the delegate said.

"We need the Americans to say which sanctions they are prepared to lift." Tehran has repeatedly said that all sanctions must be rescinded first, warning that it may stop negotiations if the measures are not lifted. Washington wants Iran to reverse the breaches of the deal that it made in retaliation for tough sanctions imposed by former US President Donald Trump.

"We will underline that Tehran does not want to hold corrosive negotiations. Our aim is not just talks for talks. In case of having a constructive outcome, we will continue the negotiations. Otherwise the talks will stop," Iran's top nuclear negotiator Abbas Araqchi told state TV.

Israel, which Tehran refuses to recognise, opposes the deal, an accord that Iran and US President Joe Biden are trying to revive after Trump quit it in 2018 and reinstated sanctions. Israel has not formally commented on Sunday's Natanz incident.

The United Arab Emirates, which also supported the decision to quit the 2015 accord and reimpose sanctions on Tehran, urged Washington to push for a better accord.

"You (US) are essentially in the driver's seat to get to a point to where we can address what I believe were shortcomings in the JCPOA," envoy Yousef Al Otaiba told Stanford University's Hoover Institution, using an abbreviation for the deal.