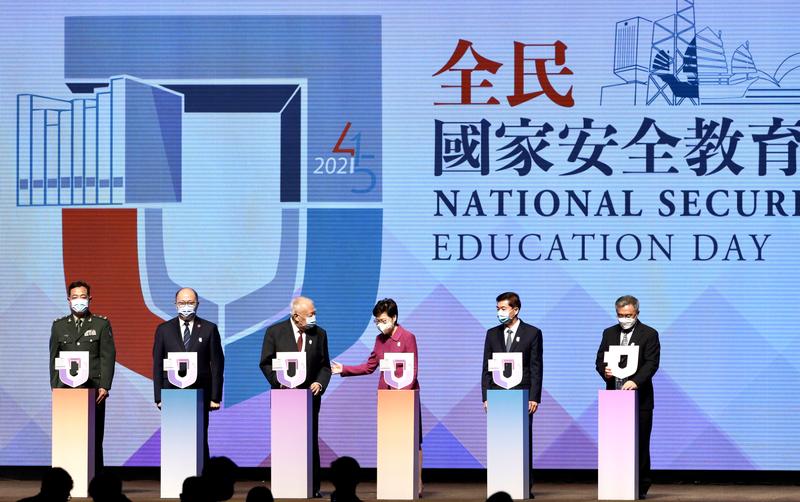 Officiating the ceremony, Lam said two moves by the central government – enacting the National Security Law for Hong Kong and improving its electoral system – have stabilized the city's situation.

To better fulfil the SAR’s constitutional obligation of safeguarding national security, a holistic approach encompassing various policy areas is needed, she said. The whole society should be mobilized to take part in such efforts, and civil servants have more important responsibilities in this aspect, added Lam.

She said she believes that with concerted efforts and if it can go back to the original intention of the Basic Law, the city will be able to properly implement “one country, two systems” and "patriots administering Hong Kong" policies. 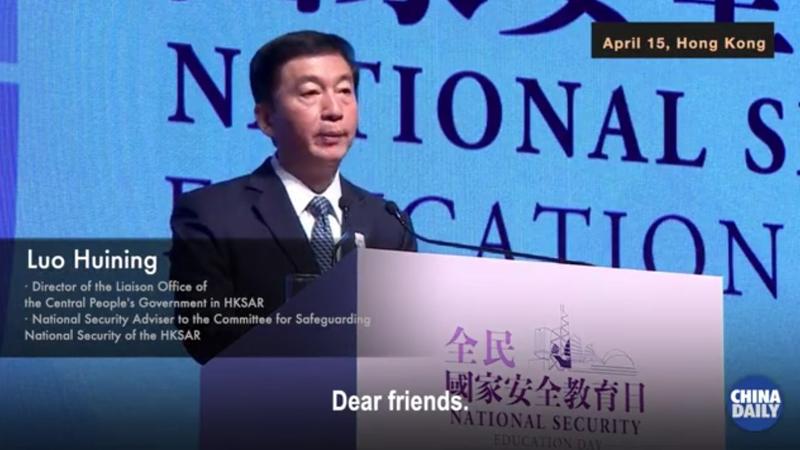 Delivering his speech at the ceremony, Luo assured that the central authorities will lend full support to the HKSAR for its lawful crackdown on criminal activities endangering national security and to the individuals and institutions that have been subjected to threat and sanctions for safeguarding national security.

“Any act endangering national security as well as Hong Kong’s prosperity and stability will be dealt with swiftly and effectively. Any attempt by foreign countries and external forces to flagrantly interfere in the affairs of Hong Kong, and to exploit Hong Kong as a pawn will be met with impactful countermeasures,” he said.

To safeguard national security, it is imperative to implement the decision of the nation’s top legislature on improving Hong Kong’s electoral system, he said. “When it comes to matters of principle such as national sovereignty and security as well as the fundamental well-being of Hong Kong residents, true patriots should step up to the plate to meet the challenge in the administration of Hong Kong.”

Zheng Yanxiong, director of the Office for Safeguarding National Security of the Central People’s Government in the HKSAR, in his speech said it is natural and reasonable that the National Security Law has gained recognition and acceptance in the city after a period of hesitation among the public.

Zheng stressed that the city has to implement the principle of “patriots administering Hong Kong” if it wants to have a sustained and sound implementation of the “one country, two systems”. Given that, he said the city’s electoral revamp is an important part of the package of decisions to guarantee the implementation of the principle and can ensure the city’s political stability.

Yang Yirui, acting commissioner of the Chinese Foreign Ministry in the HKSAR, said Hong Kong is a crucial link for safeguarding national security.

The enactment of the law on safeguarding national security in the HKSAR and improvement to the electoral system will effectively prevent external forces from meddling in Hong Kong affairs by colluding with local anti-China disruptors, and protect Hong Kong's political stability and security, Yang said.

Chen Daoxiang, Commander of the Chinese People's Liberation Army Garrison in the HKSAR, said the garrison firmly supports the policies of the central authorities and is determined and confident in safeguarding national sovereignty, security and development interests as well as Hong Kong's long-term prosperity and stability.

Various activities will also take place in schools and communities to raise local residents’ awareness of national security. The academies of five disciplined services will be open to the public, with exhibitions and performances that explain their work on safeguarding national security.